Baba Farid symbolises the deeprooted syncretic spirit that has existed in the cultural space of Punjab. One of the four prominent spiritual masters of the Chisti order of the Sufis, he was born in 1179 at a village called Kothewal (Multan) in the Punjab region of what is now Pakistan. Multan has been venerated as a great learning centre and it was here that he received his early education. It was also here that he met his spiritual guru, Qutubuddin Bakhtiyar Kaki, who happened to be passing through on his way to Delhi from Baghdad. As a young man, Farid joined Kaki in Delhi and took him to be murshid (spiritual master). Like with most sufi seers, this mureed-murshid relationship was to be a defining one. Farid succeeded him and settled in Pakpattan, where now a grand shrine stands dedicated to him. 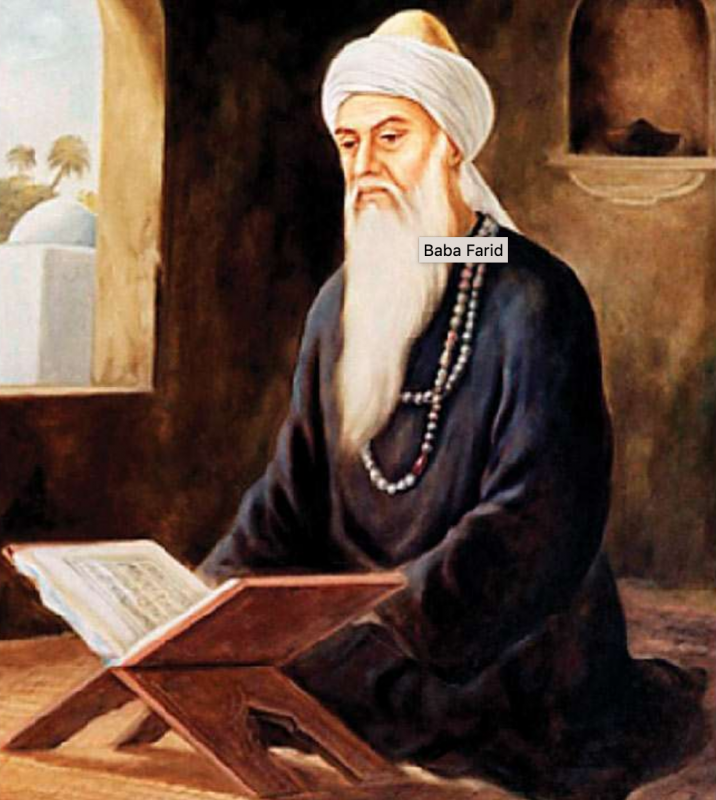 There is a legend that it was his mother Miriyam who encouraged boy Farid to pray and meditate. In his childish innocence, he is said to have asked her, quite disarmingly, as to what would he gain by prayers. She is said to have answered “Sugar”. So she would keep few spoonfuls of sugar under his prayer mat every day. Boy Farid’s inclination to pray was thus delightfully reinforced. Till one day the mother realised that she had forgotten to place the portion of sugar at the usual place. Farid, however, discovered it anyway, thus convincing the mother of his spiritual prowess. It also describes the moniker that stuck: ‘Shakarganj’ or ‘Ganj-e-shakar’, roughly, treasure of sugar.

The centrality of this little story in his life also points to his other important virtue: He was to be a people’s poet, a people’s saint, a poet who would embrace the common people’s idiom and use everyday metaphors, he was not to be the voice of grandeur, rather he would embrace humility despite his intellectual brilliance and spiritual exaltedness, he would embrace the longing of a lover without a complaint. His poetry is drenched in birha (longing), song of a love laden heart, a heart pining to meet the beloved.

Baba Farid/Sheikh Farid, the interchangeable appellations also underline the shared cultural and religious ethos of medieval Punjab. Baba Farid, at once the prominent voice of the Chisti order, is equally venerated in Sikhism.

And as a preeminent voice in Punjabi letters, given his prescience in choosing Punjabi as his language of composition when Persian and Sanskrit were the norm. One hundred and thirty four of his shloks were included by Guru Arjan Dev while compiling the Guru Granth Sahib. It is said that Guru Nanak had discovered these verses and its affinity with the worldview of Gurbani upon meeting Sheikh Ibrahim in Pakpattan, who was twelfth of Baba Farid’s descendents.

That syncretic space in Punjab is palpable not only in lived traditions like the veneration of peers but also the literary heritage springing from the milieu. There are common undercurrents between the literary forms of Sufi, Gurbani and the Qissa Kaav of Punjab. For instance, the idea of love as it blossomed in the Sufi imagination was a transposition of the divine into a more human lover-beloved equation. This back and forth is visible in all the three medieval literary forms. To make this connection with the divine more alive in people’s imagination, Sufi and Gurbani resort to using the vocabulary of interconnectedness of relations and their cultural meanings. The one oft-repeated strain is the use of the trope of a parental house (worldly) and marital house (spiritual) for the bride (soul). It also goes on to demonstrate the centrality accorded to relations in Punjab at an anthropological level. The tortuousness of throwing oneself headlong in the quest for spiritual love is thus expressed by Baba Farid.

There is the notion of Punj Peer (Holy Five) in Punjab, a cluster of five great spiritual masters who were accorded deep respect by the masses over and above religious affiliations. So, when Hir-Ranjha get secretly betrothed in the forest, they are blessed by the pantheon of the panj peers. And it is they who are invoked in the beginning of the epic. Baba Farid is one of the venerated five.

The influence of Baba Farid lives on, and he resonates primarily because he speaks to the latent humanity within each one and represents a calm confluence of diverse influences. That’s always a possibility.