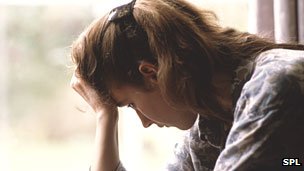 People of working age who live alone increase their risk of depression by up to
80% compared with people living in families, says a Finnish study.

It says the main factors are poor housing conditions for women and a lack of social support for men, who are both equally affected.

The study tracked the use of anti-depressants in 3,500 Finnish people.

A mental health charity said people who lived alone must be given outlets to talk about their problems.

The study authors highlight the fact that the proportion of one-person households in Western countries has increased during the past three decades, with one in every three people in the US and the UK living alone.

The participants in the study, published in BioMed Central's public health journal, were working-age Finns; 1,695 were men and 1,776 were women, and they had an average age of 44.6 years.

Loneliness and isolation results in people having fewer outlets to talk about how they are feeling, which is something that we know can really help.”

Beth Murphy
Mind
They were surveyed in 2000 and asked whether they lived alone or with other people.

Other information about their lifestyle was gathered, such as social support, work climate, education, income, employment status and housing conditions, in addition to details on smoking habits, alcohol use and activity levels.

Researchers found that people living alone bought 80% more anti-depressants during the follow-up period, between 2000 and 2008, than those who did not live alone.

Dr Laura Pulkki-Raback, who led the research at the Finnish Institute of Occupational Health, said the real risk of mental health problems in people living alone could be much higher.

Isolation
Researchers said that living with other people could offer emotional support and feelings of social integration, as well as other factors that protect against mental health problems.

Living alone, the study said, could be linked with feelings of isolation and a lack of social integration and trust, which are risk factors for mental health.

The study said all the factors involved needed to be addressed in order to understand and reduce depression in working-age people.

Beth Murphy, head of information at mental health charity Mind, said the rise in the number of people living alone had had a clear impact on the nation's mental health.

"Loneliness and isolation results in people having fewer outlets to talk about how they are feeling, which is something that we know can really help to manage and recover from a mental health problem.

"It is therefore essential that people who live alone are given the most appropriate treatment such as talking therapies, which provide safe, supportive environments to discuss and work through problems, rather than simply being left to rely solely on antidepressants."

Not sure why they had to do study on this, to point this out. Human are very social creatures and we all need someone to talk to.

Why are people living alone despite all the disadvantages?? I still live with my whole family and I have no intention to live separately. When people say why do you still live with your family? My question is, why not??? I do reliase not every case is the same.
Your views please :interestedsingh:

I live alone. But I am not depressed.

peacesign Veer Ji, good to hear. I don't think the study implies that every person living alone is depressed.

Mhh, I think livinig alone is a great experience, you can study yourself better, You wouldn´t have any problems.

TigerStyleZ said:
Mhh, I think livinig alone is a great experience, you can study yourself better, You wouldn´t have any problems.
Click to expand...

Yes, it can be a great expeience. If you can survive on your own, it can build your confidence and teach you things you never knew about yourself. But it is not without problems. There is just a different set of problems. Sooner or later you will want to have a family again. As they say, the grass is always greener on the other side of the fence.

You are right Annie ji, but assumed that you had a family. Well if you start to see everything with open eyes, you will see in everything family-

TigerStyleZ said:
You are right Annie ji, but assumed that you had a family. Well if you start to see everything with open eyes, you will see in everything family-
Click to expand...

I live with my two sons now, but over the years I have experenced many different kinds of family situations. Peope come and go. A bad family is worse than no family at all, but a good family is wonderful because they take care of each other.

This reminds of a famous quote "a man who doesn't spend time with his family can never be a real man." --by the famous Don VC.
A family can make a difference and having a good successful family life is something you have to work at all the time, it doesn't just come with numbers.
With regards to the depression issue, I feel that many do not come forward and these make the undiagnosed numbers. These undiagnosed people in families are actually less likely to seek medical help as they would be occupied with efforts of maintaining a family and also with help from the supporting family.
However, this does not rule out that people in families don't feel lonely as much as ones living alone.
Loneliness and depression will still be apparent across the board regardless of living alone or with a family.

Thank you for everyone's view. I didn't realise there would be so many. Being on your own can be scary but it helps you to bring out your trueself. Scary thought for some
I do believe that Sikhi encourages a strong family. Strong family --> strong community --> strong nation. We are not as strong as we could be because family bonds are not strong. Our parents have worked extremely to provide us with what we have so its our duty to live with with them and provide them all the support that we can.

TigerStyleZ said:
Mhh, I think livinig alone is a great experience, you can study yourself better, You wouldn´t have any problems.
Click to expand...

How about living alone without TV and not getting depressed?
I think when, you are in bliss, outer distractions become less important to you. It's just that bliss has various levels like the phrase (Cloud Nine). They may be a Cloud Ten too. And therefore, pure satisfaction has not been achieved.

Only when compared to outer things, no matter how entertaining they are, in comparison, you don't get the satisfaction as being within yourself, in bliss.

Veer Ji, TV (media in general) creates havoc in people's minds. The less junk that goes in your mind the better.

I sometimes don't watch any TV for days just to empty my mind. When I do, I mostly watch documentaries, gardening programmes etc.. no soaps, news etc etc .. its all rubbish, filling your mind with rubbish.

Most of the TV now days is rubbish anyway. People should be very selective and careful about what they watch, its just a burden on your mind.