Jap - as in Mool Mantar

The method of realization is an integral part of the Mool Mantar. It is the process of Jap – meaning repeatedly keeping attention on Truth. The Jap as explained in Gurbani is thus quite different from a “chant”. It is repetition of the knowledge of Sach learnt from Gurbani. It is a way of identifying with the Origin. It also is a way of keeping attention in the present for Shift to come about.

The Jap is also a meditation as it in the beginning takes our awareness within. The Jap is done of the Sach as described in the Mool Mantar. The below closing lines of the Mool Mantar explain the key to the Jap method.

The True ONE is present in now and, says Nanak, the True ONE shall remain existing in the future.


These lines are again to be looked at with a different angle here.

The word Aadh means beginning, origin, commencement; beginning of time, space or creation and the word Jugad means during ages, after beginning. In the second line the Sach indicates ever existence.

These two lines tell about the hidden structure of Creation. These lines when seen together as shown in the chart by showing the common Sach word in separate row below, then division of Sargun-Nirgun is clearly seen along with other revelations.

This indicated division, gives hint of the basic formation of universe. These are also relevant for shift in thought which includes both of them and are relevant in the method to perceive Sach by Jap.
Two last lines of Mool Mantar have been placed in the table with the common Sach word in a separate line below.
First line shows time movement forward with past, present and future, so this line indicates Sargun. Whereas the line with Sach shows same presence and being Sach which is True so shows Nirgun. 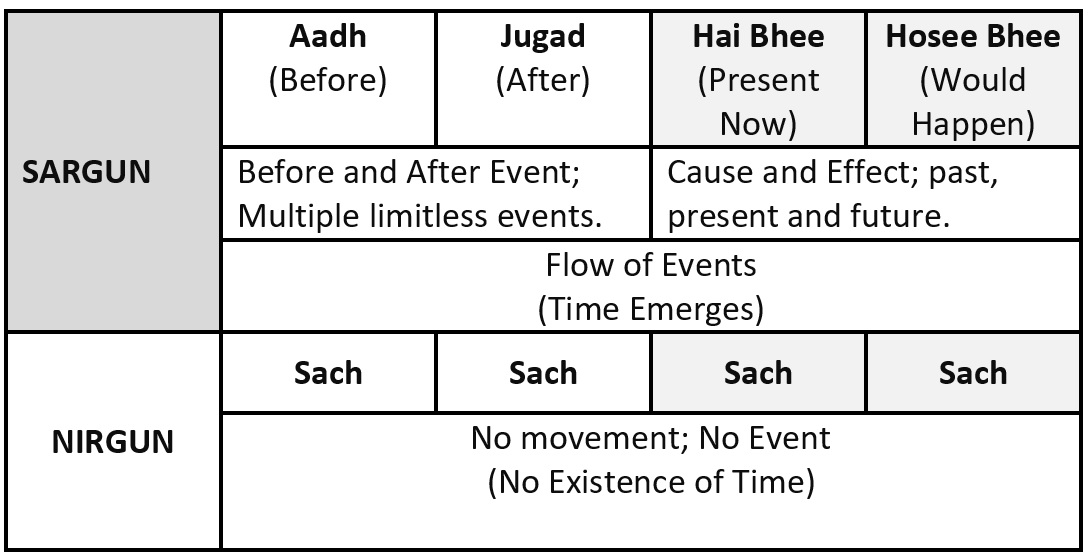 The words Aadh and Jugad speak that before and after there is Sach. In Sargun there are forms which can be seen with our physical eyes like humans, animals, plants, trees, mountains, water, fire, earth, stars, houses, cities, cars, distance etc. What we do not see but has the quality of being transient is also Sargun like forces of Nature, Subtle Body, thoughts, ideas, systems, society, computer programs, etc. these are all created.

The two words Aadh and Jugad points towards everything happening in the universe is due to and is being created by Sach. From a small micro to the vast cosmos, from birth of a particle to that of a galaxy everything is a process of ever happening Creation. The quality of Created is transience, change, a beginning and an end. These get Created again, there are cycles in nature, day and night happening again and again but no new day is same as the previous. Everything if seen minutely is new.

Nirgun is same singleness that is existing shoving no time. In Nirgun there is no beginning and no end. Nirgun is a silence that is ever existing before of after are parts of Sargun world.

The Hei Bhee and Hosee Bhee indicate that present and future. What is expected in future becomes present. These two are interconnected. The past however is what has appeared as present. The future is dynamic as the word Hei Bhee means "what is" and Hosee Bhee means “would be". So what is in the present decides the future. This cycle of past, present and future is being ever created as a process by Sach. From this comes our experience of Time flow. These two also show that only the present is moving. There is thus only the present now. Time does not exist, it emerges as an experience.

In Jap we expect the Sach to be present there like we feel as if Sach is present, Anhad Sabad is being heard.

Nirgun is a different level. It should not be considered as an extension of Sargun. This is a common mistake. Subtle body is created one and so also is energy. With Jap the shift happens with perception of Sach in Conscious Awareness. Our Conscious Awareness known as Surt in Gurbani is a Nirgun Sach and is the life of the Body. Our Consciousness is Sach in nature so it can perceive Sach. Anhad Sabad is Sach and within our Sargun body it is heard within mind as a Sound. The Consciousness is present in Universe is seen as light within our Sargun body.

The Jap which has to be done with expectation of Sach being already present manifests Sach as our State of Being.

Sach being formless is to be felt only and is perceived only when our awareness is within in Nirgun level. Now let us look at following lines of Gurbani.

The Nirankar (formless one) is also in the form; and so the Nirgun and Sargun are same One.


Do the above line indicate that the whole creation in its permutation and combination exists simultaneously? Gurbani elsewhere indicates that “all has been put in place once and for all". Further from a potential state in the Nirgun the Sargun comes in existence.

From formless there appears the visible forms.

Gurbani uses the two words Nirgun and Sargun so that we can keep the difference between two states in our mind so that Sargun thinking does not intrude over the idea of Sach.

The Created is not Nirgun.

Ekankar does not have a form nor is Satguru a form. The Truth that these lines tell is that Nirgun is absolutely not like Sargun. It is also not an opposite. The Nirgun gives rise to Sargun. Without Nirgun, the Sargun does not exist. Both are existing together.

The figure below further explains the two lines of Jap verse and Creation: 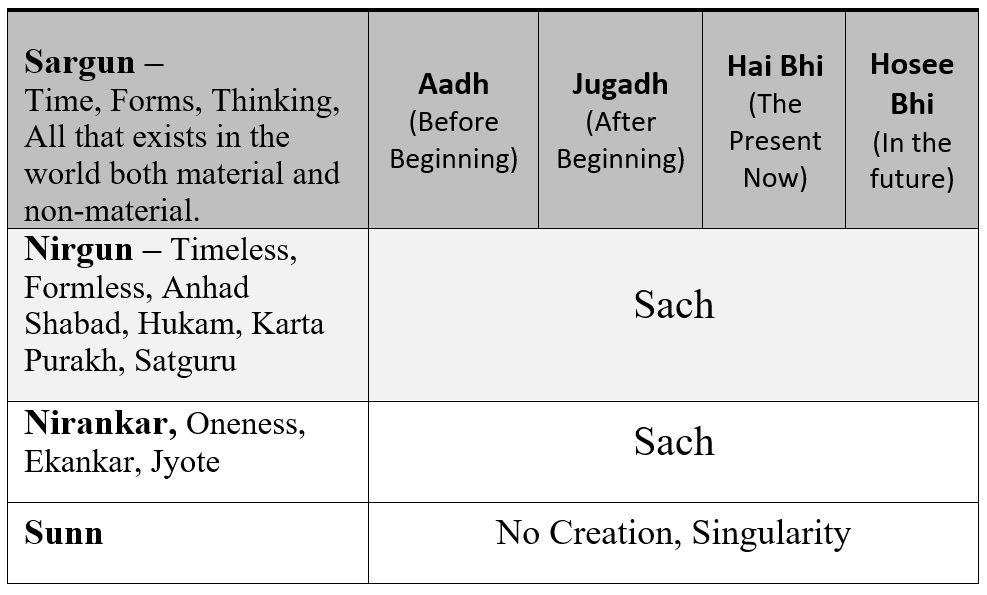 In the above figure the words are bifurcated and placed in row. More rows are added from the explanations in Gurbani specifically the well known line that says "Sargun Nirgun Nirankar Sunn Samadhi Aap"

The “Hai bhee” is the present which is the cause that manifests the “Hosee Bhee” in the future “Now”.

These two words also show that our life circumstances are also due to the present. Gurbani explains in Japji composition that “the words write our destiny on the forehead”. The words are thoughts in our mind. It is also states that “what we sow, that we reap”. This is cause and effect. It is these thoughts and emotions that get reflected in the future bringing circumstances and events in our life.

Gurbani also tells us that Naam too is expressed in words and thoughts. So in the Jap Meditation we use Gurbani words of Sach to identify with Sach in Nirgun.

The process of Jap is elaborated below:

Firstly we have to go within when thoughts would be observed. We have to ignore these and shift awareness deep beyond further in the head at a point known as Charnarbinnd. It is behind eyes, slightly below. (See figure in Chapter 8). The line “Hai bhi” (Is present) and “Hosee Bhi” (would become present) so in Jap consider the Sach to be as if present, even though at present not part of experience. We keep attention within and do Jap with concentration having this thought with feeling as an expectation in the Now. First one may go for feeling presence of Sach which is known as “Hajuri” in Gurbani. We may think of Karta Purakh presence, Satguru presence or God presence. The Shift is brought about by Satguru Purakh by giving Nadar (vision) that opens the next Gyan Khand, which has Sach perception in Conscious Awareness and understanding about Sach.

Next is hearing the Anhad Sabad.

The awareness has to be kept at “Charnarbinnd point”. Jap of Gurumantar "Waheguru" makes this possible. The location of this point is behind the eyes where breath touches the palate. Know that this is not a physical body part nor is a part of subtle Body. It however is known to the Consciousness intuitively. It seems the attention automatically goes there. When we do Jap of Gurumantar – “Waheguru”, we keep can keep attention at that point even with open eyes.

Gurbani talks of “Mann-Tann” (mind-body) being together. So in Jap too these are considered together. The feeling of Love for Ekankar is to be felt in the Body.

Lastly the most important point in Jap is to first stop identification with Haume. See yourself as part of the whole. Know the truth about Haume from Gurbani and your own reality. When Haume identification goes then Sach perception comes.

I am nothing, Prabh; everything is Yours. In this world. Here is Nirgun and there is Sargun, playing within is my beloved Master.
-( Guru Granth Sahib: Ang- 827)

People complicate Truth. We spend hours explaining it, dissecting it, putting our own academic scholarly input into it. Hours upon hours spent, procrastinating, instead of reading the Simple Truth of Gurbani, and applying it to our lives.

It doesn’t Need Dissecting... or long scholarly articles complicating it. It just needs to be Applied and Experienced. The Gurus gave us everything in The SGGSJi, gyan for the taking to be applied and experienced in action by us (Truthful Living). Don’t waste time, life is so short and precious, the time is now.

Sikhilove1 said:
People complicate Truth. We spend hours explaining it, dissecting it, putting our own academic scholarly input into it. Hours upon hours spent, procrastinating, instead of reading the Simple Truth of Gurbani, and applying it to our lives.

It doesn’t Need Dissecting... or long scholarly articles complicating it. It just needs to be Applied and Experienced. The Gurus gave us everything in The SGGSJi, gyan for the taking to be applied and experienced in action by us (Truthful Living). Don’t waste time, life is so short and precious, the time is now.
Click to expand...

Vichar , contemplation and thinking to understand is an important part of Jap which Gurbani teaches. Way of Gurbani is gyan. One has to know what Truth is and only then can come Truthful living.

Gurbani actually says to live with Naam in mind. Without Vichar it would be difficult to know what "Charan Kamal" and "Har Har Jap" is which is mostly confused with chanting.

With effort one becomes blissful as doing Simran brings peace.

Jap and Jap the Naam of Gobind by fully reflecting on it. ||1||

Jap of Lotus Feet of the Guru is Har Jap to live.

Meditating on Parbrahm is to drink the Ambrosial Nectar through mouth. ||1||Pause||


Sharing is important and is advised in Gurbani. So discussing, scholarly articles are a way towards stirring a persons mind to unveil the effect of Maya.

Knowing about Naam through Gurbani, coming to know meaning of Saran is a mind change process from Haume removal to Naam. Gyan is given by the Guru and comes from within.

Above is not a thesis nor a personal scholarly input nor any dissecting.

Gurbani reveals in many ways by even not stating something. Above is the way the understanding of Mantar part came and so it is stated.
Last edited: Nov 11, 2020