Islamophobia: Discovering The Impact On More Than Just Muslims

“Before you dump your issues onto me, I am not a Muslim or Arabian. I am a Sikh from India.” This was the sign that greeted me when I recently popped into a convenient store on Sunset Boulevard. The man behind the counter, who displayed the sign, was wearing an orange turban, a clear sign that he was Sikh. 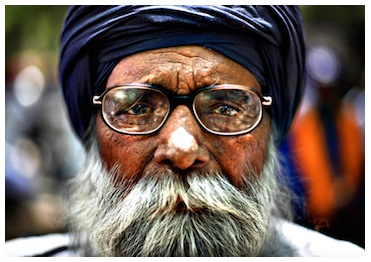 After many lootings, shootings, riots and then eventual vigils, the clerk told me that he posted the sign to help protect him because he was being harassed by customers, who thought he was Muslim. I learned that ever since 9/11, Sikhs have been greatly targeted and victimized.

He added that some of his Muslim friends now were wearing crosses during the day to protect themselves and then removing them at night when they returned home. I was stunned by this revelation. I have been studying and volunteering in the social justice community for several years, and I was surprised that these kind of protections were still needed.

As an alumnus of the fellowship with NewGround: A Muslim-Jewish Partnership for Change, I had learned about the painstaking details of Islamophobia, but I hadn’t known up until that very moment that in our country the ignorance impacted more than just Muslim Americans. My conversation with the clerk reminded of other’s plight, such as the one faced for centuries by my Jewish community: Jews have posed as being a part of another religion for self-protection and the indignation and shame one feels for having to pursue that path.

We keep repeating the sins and mistakes of history. It’s sad that the instances that have come from hate are allowing us to perpetuate that hate among our neighbors and friends. There is a simple solution to all of this – education, which then leads to camaraderie.

Just the night before, my Jewish, Muslim, Hindu and Sikh friends and I broke bread together and talked about Sikhism. I am fortunate that the community I am surrounded by continually seeks knowledge in the pursuit of education, acceptance and understanding. Through this, we are able to find love and support. Through this, I know that the patrons of that convenient store would understand the man’s religion is not Islam, but Sikhism. Even if he was Muslim, there is no room for misunderstanding and hate in our community.

The Sikh form was introduced so we couldn't easily escape trouble,our Guru sat on a hot plate so others could be cool,can't we take some of the misplaced heat meant for our Muslim brethren .
It seems strange with our mighty heritage to use the defence of being another religion to escape harassment,notwithstanding if it was me being shot at I would retract my idealism.
Last edited: Apr 6, 2015

I got a lot of respect for islam now I realise what it has to go through. They protect communities and I guess if you do all the leg work you would want some type of payment but they then have to deal with the side effects of ignorance from communities. Like with my last name you get muslim nagra's, sikh nagra's like, hindu nagra's. It's learning to understand the human race as one. Maharaja Ranjit Singh made the mistake at first of viewing with one eye viewing with both eye's you realise none of our communities are trying to destroy each others faiths it's us not understanding how our actions all effect each other that brings about our differences. Yeah you have the idiots in all communities it's understanding the idiots and disciplining them and then there is developing a common hate that is distructive to the entire race. If we carry on hating each other so much the brown man will resemble nothing more then a slave to the world to use and abuse. Stand together and strong and our allegiances have built kingdoms and empire's.

I use the term brown man as I can only mention about experiences and interactions I have experienced in my own community. Although all Humanity is sikh.