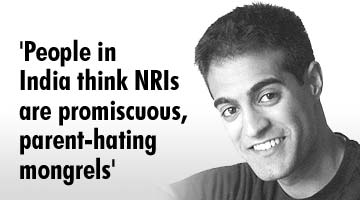 Ankur Bahl, Fulbright Advanced Student to France, is using his grant to study ballet, jazz and modern dance at a French conservatory. "I have trained in Bharata Natyam for 16 years and am using my year in France to expand my dance vocabulary through the study of Occidental dance," says Ankur. A journalism graduate from Northwestern University and a Marshall Scholar, Ankur, 22, will study for two years in London, starting next year.

Son of Santa Clara management consultant Sudarshan Bahl and computer scientist Manju, Ankur says whatever he does is geared towards helping minority communities. His parents instilled the value of service in him and younger brother Veyom from childhood, he adds.

"Ankur has the leadership, drive and capacity to explore complex social issues and present solutions with extraordinary clarity and artistic preciseness," says his father. "He is prepared to make a difference in society and will leave his footprint in any field he pursues."

Ankur spoke to Senior Editor Arthur J Pais in New York about his life and passion.

Did anyone discourage you from learning Bharata Natyam?

There was the occasional Punjabi uncle who would say, 'Why do you waste so much time doing this tha thai thai tha? Take bhangra classes and you can perform at parties.'

How did others in the Indian-American community react?

Many told me that being a male dancer, the dance could be very powerful. But they would send their daughters to dance classes and their sons to math or computer camps or soccer practice sessions.

Now that you are grown up, how do they react?

No matter how many scholarships or degrees I earn, the fact that I want to make a living off my passion for the art raises many eyebrows. When I was taking dance classes as a boy, everyone was gung-ho about it. Now that I want use the art as a mechanism for change, many want me to 'grow up,' take life seriously and get a job.

Many desi kids opt for an anglicised name. Did you feel like changing yours?

I wanted to be like other boys in school -- to have blond hair and be named Andy, John or Mike. Elementary and middle school is hard when you are younger than everyone else in class and when your after-school sport schedule consists of dance classes and jump rope training. Add to that a name that nobody can pronounce correctly and you are doomed to feel like the weirdest kid in school. I have always been called 'Anchor,' 'Encore' and 'Onker.' Luckily, the phase in my life where I identified with Pecola in Toni Morrison's The Bluest Eye has come to a bit of a close today. My name represents everything that I am.

Why do you feel that way?

In Sanskrit, Ankur means sprout or sapling and represents the beginning of life. In many ways, I am exactly that. I am my parents' first child, their reason for coming to the United States as immigrants, a living memento of the new life they started here. Andy, John and Mike are lovely names, but I'm sticking to Ankur.

What do you admire the most in desi kids in the US?

I admire their drive to succeed and thereby repay their parents for their sacrifices.

What do you dislike the most?

It is not exactly a question of dislike. I have a concern about my generation of Indian Americans. I fear that many of us are not pursuing our passions in life, but instead are taking the safer road, the one our parents choose for us.

When did you start thinking about the myth of a model minority?

I read Vijay Prashad's The Karma of Brown Folk at 17. I understood that the Indian community was not as hunky-dory as we like to think it is. Being considered the model minority hides the truth about problems within our community. It makes the less fortunate in our community and among other minority communities seem lazy and blame them for their difficulties in life. In reality, it is a never-ending system of glass ceilings and discrimination that prevent their success.

What's worse, most Indian Americans have internalised the model minority stereotypes and think it is our God-given natural talents that make us succeed, that anyone who isn't doing as well is not trying hard enough.

If someone cites you as an example of a model minority, what would you say?

I would say they are absolutely right. I am living proof that the stereotype is based on reality. But there are African-American, Latino-American, Jewish-American, and many other hyphenated identity Americans who are Fulbright and Marshall Scholars as well. Just because I exist, it does not mean the stereotype is valid for a majority of the Indian community, or that my successes indicate open doors for all minorities.

What are the best lessons you have learned from your parents?

I learned the importance of being a lifelong learner. My parents taught me a killer recipe for Pudina Chutney.

Where do some Indian parents go wrong in raising their children in the US?

I wish more Indian parents realised one thing about their children growing up in the US: we might not think, speak or operate like our cousins in India. We might not choose to cook with desi ghee. We are cultural hybrids. We are creating something new. Don't fear it, embrace it.

Some parents will never let their daughters out on a date but they will let their sons go. Have you come across this double standard?

Yes. But this is true for any community in the US. We still suffer from a bit of sexism. Hopefully, we'll get over it soon. One more thing -- let us date! If we don't, how do you expect us to get married? Not all of us are going in for arranged marriages.

Did you have to deal with misconceptions because of ethnicity?

Not really. I was surrounded by open minded and culturally aware people. One experience lingers: I lived in Sioux Falls, South Dakota, and worked as a reporter for a local television station two years ago. While on assignment covering an after-school program, I interviewed a 10-year-old girl.

When I stepped out of the room, she turned to the photographer with me, and said, 'That's Osama bin Laden, isn't it?' My partner could not convince the girl otherwise. She insisted, 'He's wanted dead or alive.' I wondered what the girl was being fed at home.

Desi kids, particularly teenagers, complain their relatives in India judge them too hastily. What has been your experience?

Everyone has misconceptions about people they don't live with. If people in India think Non-Resident Indians are promiscuous, parent-hating mongrels, I ask them to walk down the streets of Delhi, Mumbai or Bangalore and tell me they cannot find the same stereotypes there. Luckily, my family in India does not think too ill of me. They think I am a bit nuts, but that is personal and has nothing to do with me living in the US.

Do you see desi films?

I do not watch Bollywood films often. I cannot stomach actresses running around a hill in a white sari, a song in their lips while it's raining. On the other hand, I love Indian music of all genres.

What are four of your all-time favorite desi films?

Monsoon Wedding. It is a dead-on representation of a Punjabi family. Second, Devdas, as it is one of the most beautiful spectacles I have ever seen. Third, Mughal-e-Azam (my dad will be so proud) as it has some of the best pieces of music. Finally, Bend it Like Beckham, as it is hilarious and resonates with me. Instead of being a girl soccer player, I'm the boy dancer.

Name a journalist who has inspired you and why?

Thomas Friedman (The Pulitzer Prize-winning New York Times columnist and a former Marshall Scholar) as he has traveled the world, reported on some of the most important developments in modern history, but still explains global phenomena, triumph and tragedy through everyday stories of people.

I am more spiritual than religious. I don't always believe the five Pandavas were immaculately conceived, that Ravan had 10 heads or that Shiva cut off his son's head and replaced it with one of an elephant. But the teachings of the Gita and Upanishads are important, relevant and common to teachings of most languages.

You are a journalist, performer and activist. How do you see these fitting together in life?

I went to college knowing I wanted to become a voice for the minority communities in the US that are not adequately represented in media, art and politics.

I use my work to accomplish this goal. I primarily see myself as an artist.

I try to create works of art that touch people and make them aware of the diversity we are fortunate to live with and the power for positive social change that lies in celebrating that diversity.

What is your favorite quote?

One by Woodrow Wilson: 'You are not here merely to make a living. You are here to enable the world to live more amply, with greater vision, with finer spirit of hope and achievement. You are here to enrich the world. You impoverish yourself if you forget this errand.'

URL for this article:
http://www.rediff.com///news/2005/jan/25inter1.htm © 2003 rediff.com India Limited. All Rights Reserved. This material may not be published, broadcast, rewritten, or redistributed.