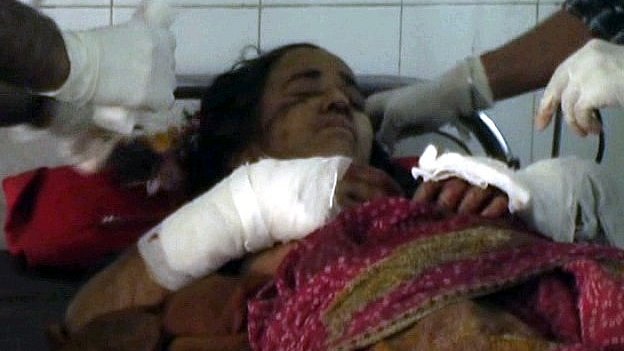 Kamla Devi spoke to the media from hospital, where she is stable.


An Indian woman armed only with farm tools is stable in hospital after killing a leopard that attacked her.
Kamla Devi, 56, sustained multiple bites, cuts and fractures during the half-hour battle.
She had been fetching water in northern Uttarakhand state when the leopard pounced on her from nearby bushes - she fought back with a sickle and spade.
"I thought I was dead but I did not lose patience and courage," she told reporters after her lucky escape.
Smashed teeth
Ms Devi was carrying water from a canal to her field near the village of Sem Nauti in Rudraprayag district when she was attacked on Sunday.
She said she managed to smash some of the animal's teeth during the struggle.
"I fought head on with it for almost half an hour. Then I came to know it was dead," she told reporters from hospital in the nearby town of Srinagar Garhwal.
Doctors were surprised she had survived. 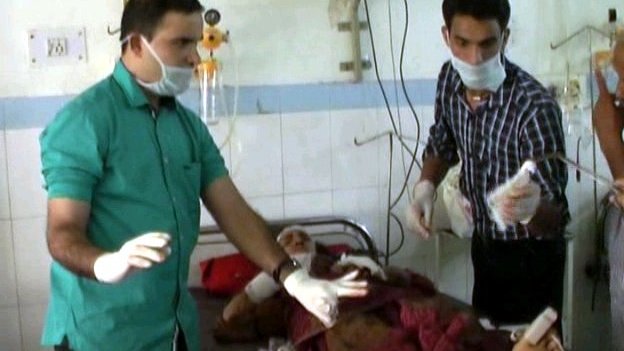 "She has two fractures on the right hand and one on the left. She also has deep injuries on her head and legs. There are bite marks all over her body," said Dr Abdul Rahul, who has been treating her.
Pankaj Bist, one of the villagers who helped take Ms Devi to hospital, said: "It was around 10 in the morning when she went to the field. A leopard pounced on her."
"She is very brave. She attacked the leopard and took the fight head on with her sickle."
In the past week, leopards have killed one woman elsewhere in Uttarakhand, and injured another in the Rudraprayag area.
Villagers say leopards are now more visible around human settlements as the big cats' habitat is increasingly encroached upon by humans.
Rudraprayag was made famous in the 1920s by hunter-turned-conservationist Jim Corbett.
His book Man Eater of Rudraprayag charts his efforts to track down an elderly male leopard which terrorised locals for years and was reputed to have killed more than 125 people before Corbett shot it dead in 1925.


I find this women's courage, stamina and strength amazing. Anyone who has a house cat knows just how strong they are for their size. I can not imagine wrestling a leopard for almost half an hour.