General India Sinks Pirate Ship. No, It Is Not An Adventure Film! 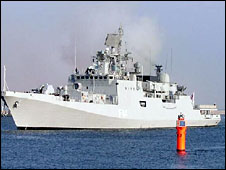 The Indian navy is now patrolling off the Somali coast

An Indian navy warship has destroyed a suspected Somali pirate vessel after it came under attack in the Gulf of Aden.


What do forum members think about this news event? Piracy has become a scourge to worldwide trade, transportation and economic collaboration in the past year. The number of news stories about piracy on the high seas in the past month is alarming.
India has not taken a hands-off approach to this threat it would appear.

From Wikipedia, the free encyclopedia 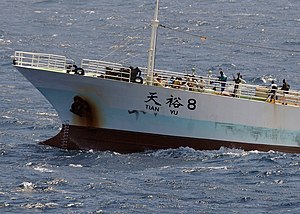 http://en.wikipedia.org/wiki/Image:Tianyu-8.jpg
Pirates holding the crew of the Chinese fishing vessel Tianyu No. 8 guard the crew on the bow.


Piracy off the Somali coast has been a threat to international shipping since the beginning of Somalia's civil war in the early 1990s.[1] Since 2005, many international organizations, including the International Maritime Organization and the World Food Programme, have expressed concern over the rise in acts of piracy.[2] Piracy has contributed to a rise in shipping costs and impeded the delivery of food aid shipments. Ninety percent of the World Food Programme's shipments arrive by sea, and ships have required a military escort.[3]
In May 2008, Islamist fighters, who are opposed to the Transitional Federal Government, also attacked pirates.[4] In August 2008, Combined Task Force 150, a multinational coalition task force, took on the role of fighting Somali piracy by establishing a Maritime Security Patrol Area (MSPA) within the Gulf of Aden.[5] The increasing threat posed by piracy also caused significant concerns in India since most of its shipping trade routes pass through the Gulf of Aden. The Indian Navy responded to these concerns by deploying a warship in the region on October 23, 2008.[6][7] In September 2008, Russia announced that it too will soon join international efforts to combat piracy. However, the Russian Navy's warships will conduct operations independently.[8]
On 7 October 2008 the United Nations Security Council adopted resolution 1838[9] calling on nations with vessels in the area to apply military force to repress the acts of piracy.[10] At the 101st council of the International Maritime Organization, India called for a United Nations peacekeeping force under unified command to tackle piracy off Somalia.[11]
In November 2008, Somali pirates began hijacking ships well outside the Gulf of Aden, perhaps targeting ships headed for the port of Mombasa, Kenya.[12] On November 19, 2008 The Indian Navy reported that the warship INS Tabar destroyed a pirate vessel after the pirates threatened to blow up the warship. [13]

Characteristics of the pirates


Most pirates are aged 20-35 years old and come from the region of Puntland, a region in northeastern Somalia. According to a BBC report, the pirates can be divided into three main categories:
The high profits of piracy is what attracts young men into pirate gangs, and in a country where many people are short of food they lead a very lavish lifestyle with cars and big houses. It is common for pirates to take on a second or third wife from nomadic tribes once they have made their fortune. Despite the ****** fighting between clans in the country the pirates rarely fight amongst themselves, united by the common aim of profit. In a way they have become part of the local social elite, making so much money they can hand out loans to businessmen. [29]
Somali pirates get most of their weapons from Yemen but a significant amount comes from the capital Mogadishu. Weapons dealers in the capital receive a deposit from a hawala dealer on behalf of the pirates and the weapons are then driven to Puntland where the pirates pay the balance. [29]

Thanks for the background on this because it puts things into context. The news reports are more frequent now but the breakdown of political and social order in Somalia has contributed to this situation. I for one find it positive that India has taken a blunt approach to the situation. Now after reading your post even more so because we find out that the pirates are also blocking humanitarian aid. Overall, the plight of merchant ships is bad enough. But the plight of Somalia is horrible.

Here is another common theme: Weapons dealers in the capital receive a deposit from a hawala dealer on behalf of the pirates and the weapons are then driven to Puntland where the pirates pay the balance.

p/s The idea put forward by India regarding a naval peacekeeping force is resourceful!

SPNer
The documentries i have seen in the past and a book i have on Indian Pirates, i feel there are tycoons behind this...there is huge money and the actual pirates in action are a small fry.

I have heard of many people of the Arabian countries and mediterranean supporting them and giving them safe passage...arms ..

what i feel is if every ship is well eqipped with a force this nusiance can be stopped...i fail to understand The huge vessel which was carrying a full load of two million barrels of oil worth around $US100 million ($153.35 million) was not equipped to overcome such resistance !!

The most recent ship capture -- the one with all the oil that you are talking about -- I think had no military escort. And part of the problem was the passage was too narrow to manoeuvre in. They were sitting ducks. You can check that story on bbconline also, and so will I for better details.

Of course there are tycoons behind this. We will never know their names. After 10 or 15 years the pirates become part of the economic structure of a region. Let's keep on top of situations as they develop.

aad0002 said:
What do forum members think about this news event? Piracy has become a scourge to worldwide trade, transportation and economic collaboration in the past year. The number of news stories about piracy on the high seas in the past month is alarming.
India has not taken a hands-off approach to this threat it would appear.
Click to expand...

I am routin for the pirates! :happy: .... i love seeing huge governments and multi billion dollar corporations bullied by a few armed thugs with rubber dingies. (unless i was a shareholder...of co{censored} )

But another part of me feels sorry for the workers on the ships that get kidnapped.

But on the other hand, I was reading an article on how the piracy has led to a small economic boom in the coastal areas of somalia as all that ransom money trickles down to locals...which is a plus.

Pirates in the 21st century! ... sounds ... exotic and surreal? ... without addressing the larger problem of poverty in the region, piracy is likely to continue in the gulf of Aden and the Arabian Sea.

Godspeed to the Pirates and the people running from them!

SPNer
Supporter
Here are some more news articles about Somali pirates, and India's campaign against piracy.


News - Asia-Pacific - High seas piracy hits record level . Last updated: 1 May 2003 But the IMB praised India and China for handing down long prison sentences to pirates. The next three worst-affected countries - Bangladesh, India and Nigeria - had nine each.
news.bbc.co.uk/1/hi/world/asia-pacific/2994013.stm


Sport - Other sport... - Walker to set sail in Volvo race . Last updated: 10 Oct 2008 The updated route brings new hazards to the crews, with pirates cruising the waters in India, Singapore and China.
news.bbc.co.uk/sport1/hi/other_sports/7663442.stm


BBC Learning English | India's navy hits Somali pirates India's navy is patrolling the waters as part of the international effort to try to deter attacks by pirates on commercial shipping. Some pirates tried to escape on two speedboats.
www.bbc.co.uk/worldservice.../081119_india_somali_pirates.shtml


News - Africa - Somali pirates 'hard to defeat' . Last updated: 22 Oct 2008
We're there to try to deter the pirates," he told the BBC. He also said that the North Atlantic Council was still drawing up the rules of engagement for pirates.
news.bbc.co.uk/1/hi/world/africa/7683678.stm

SPNer
Supporter
It turns out that the incident was a tragic mistake, but the circumstances of the error describe how complicated the task of protecting maritime travel have been in South Asia.