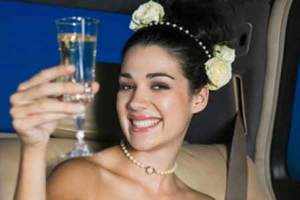 Asian men from rich countries such as Japan and South Korea are increasingly seeking brides from poorer ones like Vietnam and the Philippines -- as economically liberated local women get picky.

Marriages between Japanese men and foreign women shot up 73 per cent between 1995 and 2006, to 35,993, according to the latest government survey. Most of the women were Filipinas, followed by Chinese.

"But nowadays, it's getting harder even downtown as a lot of young Japanese women are economically independent and prefer to remain single," Esaka said.

In South Korea, more than 35 percent of fishermen and farmers who married in the 12 months to May 2009 took foreign brides, mainly from China and Vietnam, government statistics show.

Both examples point to the role of cash and lifestyle in Cupid's quiver -- it is mainly the less marketable men in the richer countries who look abroad for a wife when they can't find one at home.

On the other side of the transaction, the women are usually so impoverished that even poorer men from rich countries offer hope of a better life.

"Due to poverty in their families and because they want to help improve the situation, Cambodian women decide to marry foreigners," said Ya Navuth, director of a Cambodian group which fights human trafficking.

"Some women meet good spouses, but some have been cheated and sold from one 'owner' to another," he said.

"Many of the cases we are dealing with involve Asian women being abused by their husbands," says Fermi Wong, founder of Hong Kong Unison, which helps ethnic minorities in the city.

"They feel helpless because many of them do not have any relatives in Hong Kong and speak little English or Chinese."

Mainland China, Vietnam and the Philippines provide most of the foreign brides for Hong Kong men.

The potential for exploitation of helpless girls from impoverished families has led some countries -- both importers and exporters of brides -- to put restrictions in place:

-- Mail-order brides from the Philippines were once a common phenomenon but tales of the women being abused by their foreign husbands abroad prompted the government to outlaw the practice.

Despite this, various "marriage broker" agencies get around the law by bringing in foreign men to select their prospective brides before flying off with them.

While it was once mainly Western men who sought Filipina brides, in recent years Japanese and South Korean men have also turned to the archipelago in search of partners.

- Indonesia is considering a proposal that a 55,000-dollar "security guarantee" should be lodged by foreign men who marry Indonesian women.

If the couple divorce, the wife will be entitled to take the money. If they stick together for at least 10 years, they can claim it as "shared property".

But couples would be able to get around the requirement by marrying abroad.

-- Cambodia in March suspended marriages between South Koreans and its citizens for several weeks and introduced new requirements for the process over concerns about human trafficking.

-- Among "importing" countries, South Korea itself launched a crackdown two years ago on matchmaking agencies which use racial stereotypes or distorted information to help Koreans find foreign brides.

Activists say that because of false advertising some women end up with spouses who have few assets or who are ill, alcoholic or of difficult character.

-- Taiwan also took action, banning commercial international match-making services last year after a series of high-profile criminal cases, including one in which a man was jailed for enslaving and torturing his Vietnamese wife.

More than 434,000 Taiwanese are married to foreigners, usually from China and Southeast Asia, according to the immigration bureau.

While China is mainly an exporter of brides, import demand is expected to soar because of the one-child policy which has contributed to sex-specific abortions and a shortage of girls.

A study by the government-backed Chinese Academy of Social Sciences this year concluded that more than 24 million Chinese men of marrying age could find themselves without women to marry by 2020.

Already, young female refugees from North Korea are increasingly becoming a commodity in China, where they are sold to farmers for up to 1,500 dollars a head, according to a Seoul campaigner.

The human trafficking is not new but has become more prevalent as prices soar amid a shortage of Chinese women in the countryside, said Reverend Chun Ki-Won, head of the Durihana Association, which offers aid to refugees.