In talking about diversity, prime minister jokes to crowd: ‘I have more Sikhs in my cabinet than Modi does.’ WASHINGTON—Prime Minister Justin Trudeau took about 10 questions from American University students on Friday morning during his state visit to the U.S. Three were related to Donald Trump. 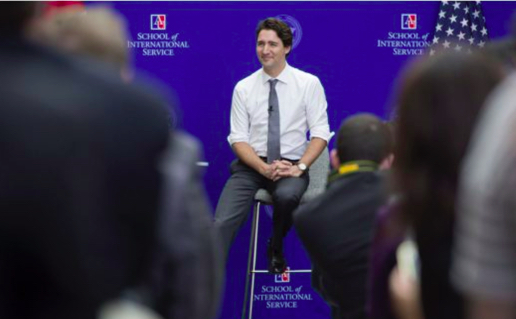 One student wanted to know how Trudeau would prevent the rise of a Trump-like figure in Canada. Another, playing provocateur, asked him how he was preparing for an influx of post-Trump-victory refugees. And the third, who prompted by far Trudeau’s longest response of the half-hour session, asked about his approach to bigotry, anti-Muslim sentiment and public anger.

Trudeau, pausing for a moment, pivoted into an extended discussion of two hot-button Canadian debates: one in 2013 over the public sector religious-symbols ban proposed by the Parti Quebecois, and another, last year, over then-prime minister Stephen Harper’s proposal to strip citizenship from Canadian terrorists with dual citizenship.

He said it is “easy to stoke anger” when citizens are worried about their financial security and their children’s futures. But he noted that the PQ and Harper were both defeated.

“I stand here as prime minister of Canada,” he said triumphantly.

The responsibility of leaders, he said, is to “draw people out of” isolationist thinking and foster “public discourse that goes beyond the knee-jerk reactions.”

“I have tremendous hope as long as we can keep conversations about our future based on reasonable respectful discussions,” he said. “And ultimately that’s where we end up every time.”

The school in northwest Washington was the site of one of President John F. Kennedy’s most famous pieces of oratory, the 1963 “peace speech,” in which he outlined his proposal to curb nuclear arms. President Barack Obama spoke there last year to discuss the nuclear deal with Iran.

Trudeau said he was more interested in listening than following in their big-address footsteps. Walking the stage with a wireless microphone, his sleeves rolled up to the elbows, he was dressed less formally than almost all the 200-plus students who showed up on their spring break.

The students applauded when the dean of the school of international studies mentioned Trudeau’s gender-equal cabinet and his decision to accept 25,000 refugees. And they cheered Trudeau, himself, when he urged men to step up as feminists.

“It’s 2016, guys,” Trudeau said, an updated version of his “because-it’s-2015” explanation for why he sought female-male parity in cabinet appointments.

The students alternated between well-informed questions and unabashed fandom. One followed a serious policy query with a request for a Trudeau autograph and an offer to work for him. Another, from the Indian state of Punjab, congratulated him for having several Punjabis in cabinet.

“I have more Sikhs in my cabinet than Modi does,” Trudeau said to laughter.

The students did not let Trudeau get away with his now-standard poker-faced line on Trump. When he declared for a second straight day that he has “confidence in the American electorate,” some of the audience laughed again.

Trudeau was also asked about trade relations with Mexico, climate policy, space exploration, and his decision to withdraw Canadian jets from the coalition fighting Daesh in Syria in Iraq, a matter that did not come up once in public at the White House on Thursday. Trudeau argued that “there are lots of countries out there doing a very good job with air strikes.”

Trudeau did deliver a short speech he aimed at young people whom, he said, would have more eclectic and less straightforward careers than their parents.

He used his own life as a questionable example.

“It’s preposterous to think a former snowboard instructor and nightclub bouncer could end up prime minister of Canada,” he said, omitting the fact that his father was prime minister.

Trudeau, who attended a lavish state dinner at the White House on Thursday night, is scheduled to conclude his three-day Washington visit with a meeting with the head of the World Bank. He went from the university to a speech luncheon hosted by the liberal Center for American Progress and Canada 2020 think tanks at the grand Mayflower Hotel.

There, he briefly outlined his four-point vision for progressive politicians: “inclusive” economic policy such as middle-class tax cuts, transparency, and an embrace of innovation and diversity.

At the luncheon, too, he boasted of his stance on preserving the citizenship of terrorists, saying it was “unpopular, but right” and a matter of “principle” for him. And he declared that all progressives, women and men, should begin calling themselves feminists as well.

“Those two need to go together,” he said.

Trudeau began the day by laying wreaths at the Tomb of the Unknowns and the Canadian Cross of Sacrifice at Arlington National Cemetery, the storied military cemetery just outside Washington in Virginia. The cross, unveiled in 1927, honours the Americans who enlisted in the Canadian armed forces to fight in World War I.

Admin Singh said:
“I have more Sikhs in my cabinet than Modi does,” Trudeau said to laughter.
Click to expand...

In fact, there are, depending on how you define a Sikh, either three or four. (Mr. Sohi, without a turban, comes from a Sikh family, but is himself, not religious. He does, however, have an interesting history running afoul of TADA that I would say at least partially qualifies him as a Sikh. Read the Wikipedia article about him here for more information.)) I would say, offhand that Sikhs have more political clout in Canada than anywhere else in the world.
Here they are, all four!

And here is a video about them Great going, Canada!