New York, NY: As far back as 1948, we have universally recognized that the “inherent dignity and the equal and inalienable rights of all members of the human family [are] the foundation of freedom, justice and peace in the world.”[1] And yet, the world is still characterized by ethno-nationalistic struggles, brutal civil wars, and political violence. In the last three decades, numerous acts of war crimes, crimes against humanity, and genocide have been committed. Yet, many have escaped accountability. Therefore, it is imperative that different mediums are used to shine light on grave abuses of human rights. Only then will there be an increase in public awareness to bring about a greater international demand for human rights. Recently, from June 16-30, Human Rights Watch Film Festival brought together human rights stories from around the globe and made it possible for the broader public to learn about the struggles of our sisters and brothers from around the world.

The Human Rights Watch Film Festival held in New York City featured a number of films that dealt with complex issues of morality and social justice. Two such films were:

Pamela Yate’s Granito: How to Nail a Dictator which “focuses on the evidentiary importance of her 30-year-old film outtakes in building a case of genocide against Guatemala’s former president,”[2] and

Luc Côté and Patricio Henríquez’s You Don’t Like the Truth – 4 Days Inside Guantanamo which “expertly employs seven hours of declassified security camera footage from the Canadian government showing the interrogation of 16-year-old Omar Khadr, a Canadian citizen and a Guantanamo detainee.”[3]

These films are significant, not only for the stories they depict, but also because they transcend geographic boundaries and nationalities. These films bring to life human rights abuses through storytelling. What makes these stories truly remarkable is their ability to make victims, advocates, and people of conscience feel as though their own story is being told. The motifs challenged viewers to empathize and demand justice for all people, since people on the other side of the world have, sadly, shared the same fate. However, for the Sikh community, these films have a special resonance because of the brutal counterinsurgency in India from 1984-1995 and the recent death sentence given to Professor Devinder Pal Singh Bhullar.

Granito is a quest for justice. It is “a story of destinies joined together by Guatemala’s past and of how a documentary film from 1982, When the Mountains Tremble,[4] emerges as an active player in the present by becoming forensic evidence in a genocide case against a military dictator.”[5] During Guatemala’s brutal civil war, Yates captured footage of the Guatemalan military’s counterinsurgency campaign directed against the Mayan civilians.

This footage has now become “evidence in an international war crimes case against the very army commander who permitted Yates to film.”[6] Granito is an amalgam of footage from When the Mountains Tremble “with several contemporary aspects of the case: people recovering bodies from mass graves (over 200,000 were killed in early 1980s); interviews with locals, like Nobel Peace Prize winner Rigoberta Mench, who were affected by the violence; and testimony of several Guatemalans before a Spanish judge trying to determine if what happened was really genocide.”[7] There have been few prosecutions for human rights violations in Guatemala,[8] but the quest for accountability is still being pursued “with each individual contributing his or her own “granito”, or tiny grain of sand.”[9] Granito symbolizes that even the smallest of contribution makes a discernable impact in fighting against impunity, however, it is the collective grains of sand coming together that symbolize a movement for justice. 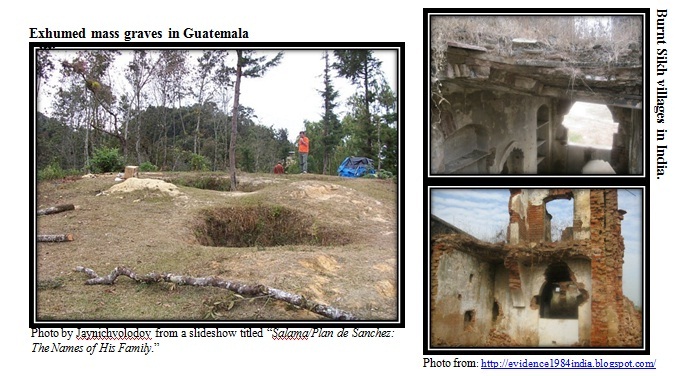 Similarly, Sikhs can contribute their own “granito” to bring about accountability for the atrocities committed during the brutal counterinsurgency in India from 1984-1995. Recently, mass graves of Sikhs killed in November 1984 have been discovered after 26 years.[10] Indian security forces committed serious human rights abuses against tens of thousands of Sikhs. Amnesty International, in its 2011 Report, states that “perpetrators of enforced disappearances, extrajudicial executions and other human rights violations in Punjab between 1984 and 1994 … continue to evade justice.”[11]

Additionally, Amnesty stated that “only 20 people have been convicted for the “targeted massacre” of Sikhs after the assassination of Prime Minister Indira Ghandi on Oct. 31, 1984.”[12] It is important to note that although Human Rights Commission’s have recognized the high level systematic attacks against civilians, no high level official has ever been convicted. More outrageous is that recently Home Minister P. Chidambaram urged Sikhs to “‘forgive’ and ‘move on’ from the November 1984 events in which thousands of Sikhs were killed.”[13] This urging is deemed to be “an open declaration of impunity,”[14] and Sikhs For Justice (SFJ) recently announced that a criminal complaint will be filed under section 153B(1)(b) of the Indian Penal Code against Home Minister P. Chidambaram for urging the Sikhs to “forgive” and “move on” from the November 1984 events.[15] As evidence from the mass graves emerges, instead of urging to move on, the Indian government should take concrete steps to hold accountable those involved in the 1984 events

While Granito is a pursuit for justice and accountability, and serves as a reminder that human rights atrocities must not go unpunished, You Don’t Like the Truth – 4 Days Inside Guantanamo is a reminder about the inhumane treatment and terrible injustices that are still occurring at Guantanamo Bay.[16] 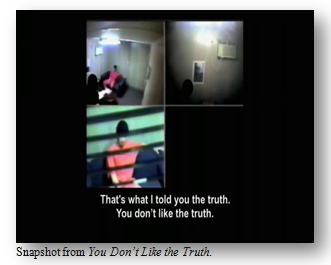 Guantanamo has been a controversial subject for years. You Don’t Like the Truth is a documentary which vividly explores and examines “an encounter in Guantanamo Bay between a team of Canadian intelligence agents and Canadian citizen Omar Khadr, then a 16-year-old detainee.” [17] The documentary uses declassified security camera footage and “delves into the unfolding high-stakes game of cat and mouse between captor and captive over a four-day period.” [18] The film creates a provocative record of war and justice by analyzing “the political, legal, and psychological aspects of the interrogation through interviews with Khadr’s lawyers, a psychiatrist, an investigative journalist, former Guantanamo detainees, and a former US interrogator.”[19] It is a “a true story about a teenager found in 2002 on an Afghanistan battlefield, where he appeared to have been dumped by his Taliban-sympathizing father, and was then tortured for days at the American base at Bagram before being shipped off to Guantánamo.”[20] Khadr’s interrogations are the focus of the film, and their unique depiction offer “an unusual insight into a world where ‘the truth’ itself is often negotiated.”[21]

At the end of his trial, “Justice M.B. Shah concluded that there was no evidence whatsoever to even convict Bhullar and that a dubious confession could not be the basis for awarding the death sentence.”[23] However, Bhullar’s dubious confession was the basis for his death sentence, and currently he has become a psychiatric patient on death row after a delay of 5,700 days on the rejection of the mercy plea.[24] Currently, Sikh communities and human rights activists are running a campaign asking that Bhullar’s mercy petition be accepted. Click here for more information on Professor Bhullar. 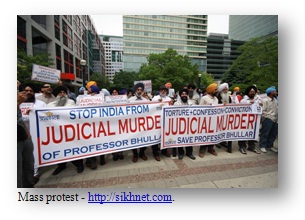 Human rights exist to protect moral standards and aspects of humanity. An increase in public awareness will bring about a greater international demand for human rights, and governments that violate the rights of their citizens should be challenged for their actions. The tangled themes of these two films—truth, justice and accountability, and times of conflict and responses to terrorism—are meant to challenge and to make viewers think about human rights violations and to demand justice for all people.

The Film Festival “creates a forum for courageous individuals on both sides of the lens to empower audiences with the knowledge that personal commitment can make a difference.” [25] UNITED SIKHS would like to emphasize that by contributing our own “granito,” the Sikh community can make a difference in our human rights situations, particularly in the quest for justice for the atrocities committed in 1984 and in seeking mercy for Professor Bhullar.

UNITED SIKHS is a UN-affiliated, international non-profit, non-governmental, humanitarian relief, human development and advocacy organization, aimed at empowering those in need, especially disadvantaged and minority communities across the world. Click here to learn more about us.

What can YOU do?

Excerpted from another post as to what is happening right now in India to Sikhs and others,

I'm saying that the term minority itself in India is a flawed concept as the real minorities who constitute less than 3% of population are never given their rights and are made to accept that they are sects of the large Hindu (as defined by Banaras based Brahmnical Institutions) society. This is unfair to all such communities and their identities will be at stake forever.


Going by Government's flawed logic, Sikhs, Jains and Buddhists belong to Hindu Society as they are not Muslims or Christians. With the same reasoning there shouldn't be two distinct acts governing Christian and Muslim Marriages as they both originated from Abraham. There should have just been a single act. If Christianity and Islam can be considered different from Judaism, why can't Sikhism, Jainism and Buddhism be considered distinct religions and not parts of Brahmnical Hinduism? The reason is well known. swordfight

Let the following then be known throughout the world,

The irony is that things always go from subtle to violent over time. 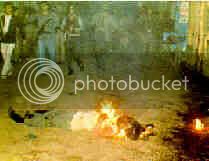 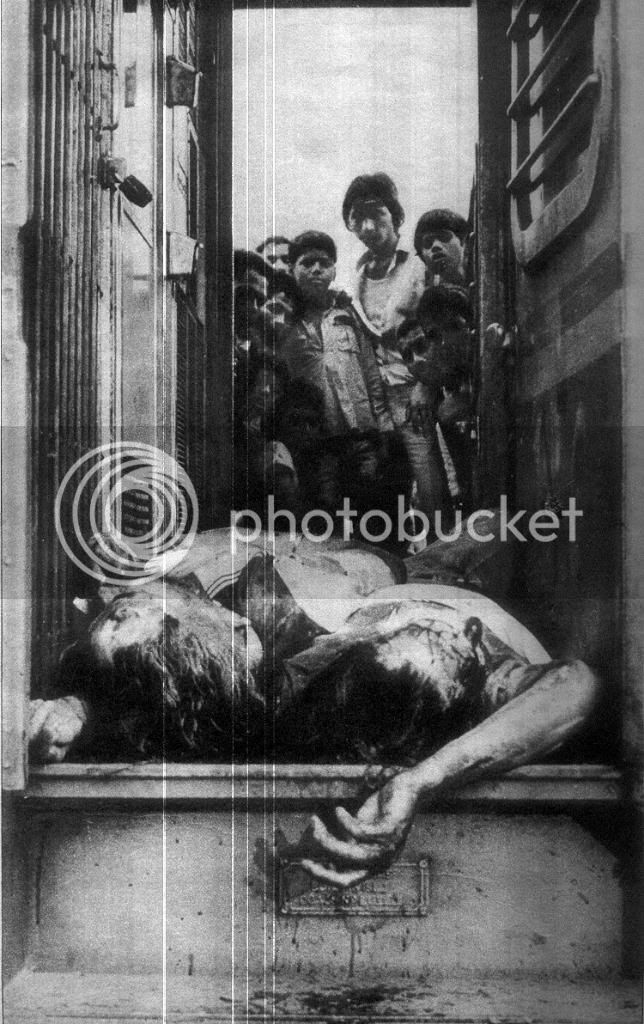 No question Sikhs in India had relatively smaller barbaric incidents before (1984,etc.) to be followed by greater violence in the future.