General How Many Moons Does The Earth Have? (BBC)

YouTube - How many moons does earth have? - Qi - BBC

This is brilliant!! It's interesting as I heard the theory about multiple moons a few years ago but whenever I asked astronomers they laughed at me. It all comes down to what you define as a moon as an influence on the orbit alone isn't enough. The characteristics of the object are also important. More explanation here;

How Many Moons Does Earth Have? 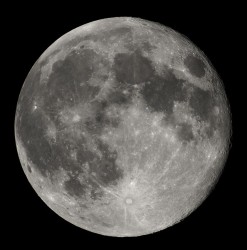 With more the 60 moons orbiting Jupiter, and 2 going around Mars, you might think that we should have plenty of moons orbiting Earth. But no, Earth only has one moon… the Moon.

Although there are many different names for the Moon: blue moon, harvest moon, new moon, full moon, it’s all just describing the same object.
There are two other objects that some scientists have referred to as Earth’s other moons, but they aren’t really moons.

The first is called 3753 Cruithne, and it’s not a moon at all, but an asteroid that orbits the Sun. Since its orbit takes the same amount of time to orbit the Sun as the Earth, it sometimes looks like it’s following Earth in orbit around the Sun. Although the orbit of Cruithne comes very close to Earth, the two objects can never really collide because Cruithne‘s orbit is tilted to that of the Earth’s by 19.8Â°. It’s a very interesting object, and has an orbit that interacts with Earth, 3753 Cruithne really doesn’t quality as a satellite of Earth.

Have you been keeping count? How many moons does Earth have? Still just 1.

The other object is called 2002 AA<sub>29</sub>, and it takes an even more bizarre orbit around the Sun. It spends most of its time in a horseshoe orbit, oscillating up and down near the Earth. Every 95 years or so, 2002 AA<sub>29</sub> comes within 5.9 million km of Earth. Because it’s so close to Earth, scientists have suggested that it might make an ideal target for a space mission to retrieve a sample and bring it back to Earth.

Astronomers thought they might have discovered another moon in 2002, which they designated J002E3. But it turned out to be the third stage of the Apollo 12 Saturn V rocket.

Still keeping count? The Earth has only one moon.