How Europe Is Indebted To The Sikhs (Bhupinder Singh)

How Europe is Indebted to the Sikhs (Bhupinder Singh)

These quotes are from my book, How Europe is Indebted to the Sikhs - Role of Sikhs in Europe http://www.amazon.com/exec/obidos/ASIN/2930247126/smallbusin0f7-20 during WW II, Vol. II.
- Bhupinder Singh (Holland)


"... I have known Sikhs to pick bullets out of their turbans during and after battle. In fact the turban absorbs the shock of a bullet possibly rather better than a tin helmet. If the turban is properly tied, it will also form an effective buffer too, for instance from a toss from a motor bicycle.


During World War 1, when the steel helmet was first introduced, we British Officers of Sikh Regiments tried to persuade our men to wear them, but they steadfastly refused, and have done so ever since."


"... At the outbreak of World War II I was serving at A.H.Q. (Army Headquarters). Shortly after I was sent for by the C. in C. General Sir Robert Cassells. He asked me if the Sikh Regiment was prepared to wear steel helmets. I replied that they had not done so in World War I, that it was contrary to their religion, that we had never interfered with religious tenets, and was it worthwhile arousing strong feelings to reduce head injuries by an infinitesimal proportion? I also pointed out that the Sikh Pagri (Turban) was a very good protection in itself to head wounds.


This latter point I would emphasise as regards riding motor bicycles. There is no question that the Pagri offers greater protection than an ordinary hat
or cap.


The reasons given above were accepted by the C. in C. India. Sikhs did not have to wear steel helmets, and I hope the same reasons will satisfy the Government."


"Thank you for your letter of 6th August 1975 enclosing Sir Reginald Savory's letter. May I say I entirely agree with all that the General says. I was in the 2nd Royal Battalion Sikh Regiment during the Frontier Campaign of 1936-38 on the N.W.Frontier of India.

My Regiment consisted entirely of Sikhs and of course they always wore the Khaki Safa (Turban to the uninitiated!)

During World War II I commanded the 4/16th Punjab Regiment from the battle of El Alamein to Tunis. In this battalion I had a company of Sikhs plus hose in H.Q. Company. They all wore the Safa and I certainly had no more head wounds in this battalion than in any other battalion in which the soldiers were wearing steel helmets.


In Great Britain we claim to support religious tolerance. Why therefore should we try to force someone to do something which is definitely against
his religious convictions?


The Sikhs have fought for us in so many campaigns and laid down their lives for us - I consider that we owe them a great deal and have now a chance to repay our debts in a small way by allowing them to wear Turbans instead ofcrash helmets while driving motor cycles.


I give you my full support in your struggle to get exemption and wish you the best of luck."

In "The Sikh Regiment In The Second World War" by Colonel F.T. Birdwood, O.B.E., the last words of the foreword of this book written by General Sir Frank Messervy, K.C.S.I., K.B.E., C.B., D.S.O. state


"Finally we that live on can never forget those comrades who, in giving their lives, gave so much that are great and good to the story of the Sikh Regiment. No living glory can transcend that of their supreme sacrifice. May they rest in peace.


In the last Two World Wars 83,005 turban wearing Sikh soldiers were killed and 109,045 were wounded. They all died or were wounded for the freedom of Britain and the World, enduring shellfire with no other protection but the turban, the symbol of their faith."

In the early days of World II (1939-1945) the Sikh Regimental Center,then known as 10th Battalion the Sikh Regiment, was stationed in Nowshera (now in Pakistan), when I got enrolled in June 1940.


I recollect that Maj Gern Kilroy (who had earlier commanded its No: 4 Company as a Captain) was deputed by the Army HQ (then called General HQ) to visit the Training Center to convince and persuade the Sikh soldiers being drafted to the European War Zone, to wear helmets (even over their turbans) to protect themselves from sustaining head injuries. The entire gathering opposed the idea.


Ultimately he came forward with a bet that let any one soldier accompany me to the battle field where heavy shelling is going on. If that person yet refuses to wear a helmet, I will reward him with Rs. 100 and in case he then wares it, he will pay me Rs.1 only for losing the bet. (In those days a soldier's monthly salary was only Rs.16).


He was astounded to see that all the listeners raised their hands, in acceptance of the challenge. He left the stage with a smile and submitted his findings to Army HQ, where the idea was nipped in the bud for good.

French postcard depicting the arrival of 15th Sikh Regiment in France during World War I. The post card reads, "Gentlemen of India marching to chasten the German hooligans" 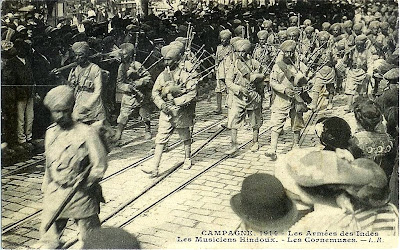 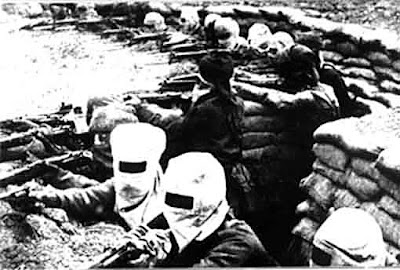 Sikh soldiers using gas masks while defending Ieper in April, 1915. On 22nd April 1915 at 5 p.m. the 2nd Battle of Ypres began with the first successful gas attack in history 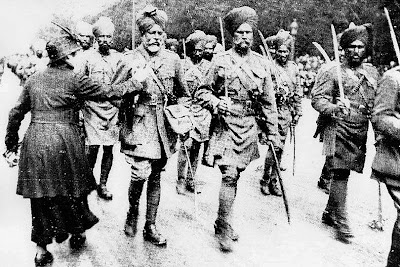 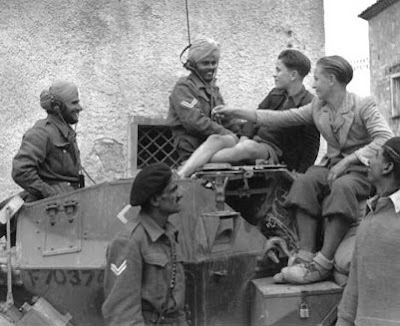 Sikh soldiers of the 8th Army with local boys in San Felice. 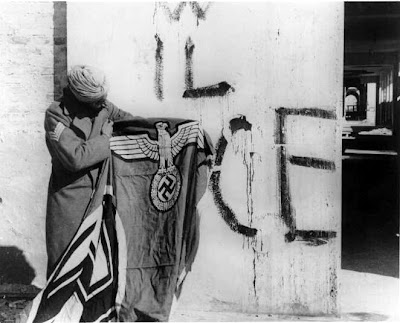 Sikh soldier of the 11th Sikh Regiment with a captured Nazi flag in Italy at the end of the Second World War.