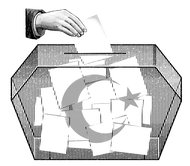 IN the Western study of medieval Islamic history, the institution of iqta — land grants from the sovereign to his soldiers — once loomed large, because scholars searched for reasons behind the Muslim failure to develop feudalism, and with it the contractual relationships that eventually led to constitutional government. But looking for parallels between the West and Islam — especially the classical Islamic heartland from North Africa to Iran — has always been politically a sad endeavor, since the region seemed so resistant to the ideas and institutions that made representative government possible.

President George W. Bush’s decision to build democracy in Iraq seemed so lame to many people because it appeared, at best, to be another example of American idealism run amok — the forceful implantation of a complex Western idea into infertile authoritarian soil. But Mr. Bush, whose faith in self-government mirrors that of a frontiersman in Tocqueville’s “Democracy in America,” saw truths that more worldly men missed: the idea of democracy had become a potent force among Muslims, and authoritarianism had become the midwife to Islamic extremism.

One of the great under-reported stories of the end of the 20th century was the enormous penetration of the West’s better political ideas — democracy and individual liberty — into the Muslim consciousness. For those of us who speak and read Persian, the startling evolution was easier to see. Theocracy-versus-democracy has been a defining theme of the Islamic Republic of Iran since the revolution, which harnessed both Ayatollah Ruhollah Khomeini’s religious charisma and the secular intelligentsia’s democratic aspirations. Over the last three decades, clerical Iran has nurtured an intense intellectual discourse about the duties that man owes to God.

When the legitimacy of theocracy started to unravel amid the regime’s corruption and brutality in the late 1980s, democratic ideas, including powerful democratic interpretations of the Islamic faith, roared forth. The explosion on the streets after the fraudulent presidential elections of June 2009 was just the most visible eruption of the enormous democratic pressures that had built up underneath the republic’s autocracy. More regime-threatening moments are surely coming.

Today’s Arab societies — less intellectually vibrant than Iran, in great part because their regimes have been more effective in shutting down internal debate — have become increasingly schizophrenic. Long before the tumult in Tunisia and Egypt, Arab liberal secular intellectuals had divided. Except for the fearless, who went to prison, liberals who didn’t flee their homelands usually became “court liberals,” whose views never seriously challenged the rulers.

Aware of the dismal fates of their kind in Iran under Ayatollah Khomeini, they faithfully echoed the anti-Islamist, après-moi-le-déluge fears that the region’s autocrats used in Washington whenever American officials objected to tyranny. Democracy remained for them a cherished ideal, attainable at some future date when the Islamists had lost their appeal and the despots their power.

The secular intellectuals in exile, however, more forcefully embraced the democratic cause — their newspapers, books, magazines, Web sites and, increasingly, appearances on Al Jazeera — delivered their views back home. Intellectuals of such diverse viewpoints as Kanan Makiya, Edward Said, Saad Eddin Ibrahim and Burhan Ghalioun opened up an ever-increasing liberal, democratic space in foreign and Arabic publications. Yes, some mixed their message of liberty with other “Arab” priorities: anti-Zionism, anti-Americanism and anti-imperialism. But their support of democracy was clear, and became more acute after the 9/11 attacks.

Understandably, the Western foreign ministries and press paid a lot more attention to the court liberals. A revulsion against the Iraq war and a distaste for President Bush helped to blind people to the spread of democratic sentiments in the region. It blinded them to the fact that among Middle Easterners, democracy, not dictatorship, was now seen as a better vehicle for economic growth and social justice.

Most important, Mr. Bush’s distastefulness helped to blind Westerners to the momentous marriage of Islamism and democratic ideas. Men and women of devout faith, who cherish (if not always rigorously follow) Shariah law increasingly embraced the convulsive idea that only elected political leadership was legitimate. Islam puts extraordinary emphasis upon the idea of justice — the earthbound quid pro quo that a man can expect in a righteous life.

This sense of justice, which Iraq’s Grand Ayatollah Ali Sistani expressed so forcefully in 2004 against an American occupation fearful of letting Iraqis vote, has been irreversibly welded to the ballot box. Democracy for the faithful has become a means for society to affirm its most cherished Islamic values.

The Egyptian revolt against President Hosni Mubarak and his regime has caused many in the West to foresee a calamitous, unstoppable rise of the Muslim Brotherhood, the mother ship of Sunni fundamentalism. The Brotherhood is frightening. Prominent members have sanctified suicide-bombing against Israeli women and children, espoused the vilest anti-Semitism and affirmed the holiness of killing those who would slight the Prophet Muhammad.

But the Brotherhood, like everyone else, is evolving. It would be a serious error to believe that it has not sincerely wrestled with the seductive challenge of democracy, with the fact that the Egyptian faithful like the idea of voting for their leaders.

In 2007, members of the Brotherhood released, withdrew and unofficially re-released a political platform — the first ever for the organization — in which an outsider can see the Brothers’ philosophical struggle with the idea of parliamentary supremacy and the certainty that faithful Muslims may legislatively transgress Holy Law. The Brothers themselves didn’t know how much free rein to give to their compatriots — they, like everyone else, are moving in uncharted waters.

The Brotherhood is trying to come to terms with the idea of hurriya, “freedom.” In the past, for the Muslim devout, hurriya had denoted the freedom of a believer to worship God; for the Arab nationalist, the word was the battle cry against European imperialism. Today, in Egypt and elsewhere, hurriya cannot be understood without reference to free men and women voting. The Brothers are trying to figure out how to integrate two civilizations and thereby revive their own. This evolution isn’t pretty. But it is real.

For the Egyptian people, the Brothers are not an enigma — they have been around since 1928. Unlike the revolutionary mullahs of Iran, who wrote books that almost no one outside the clergy read, the Brotherhood has spread its word to the Egyptian public for decades.

It’s also important that Egyptian Muslims are Sunnis. Unlike Iran’s Shiites, whose history revolves around charismatic men, Egyptians have no Ayatollah Khomeini. The Brotherhood is an organization of laymen. It has always had a tense relationship with Al Azhar, the great Sunni seminary of Cairo.

Although Hosni Mubarak has done his best to suck the life out of Egyptian society, the shadows of once great parties, like the Wafds of the late 19th and early 20th centuries, and nearly forgotten forces like the Liberal Constitutionalist Party will try to resurrect themselves in fairly short order. Ayman Nour and his liberal Ghad Party are already established.

Once President Mubarak is gone, and if his minions don’t try to maintain the military dictatorship, a quick transition to democracy is likely to produce a plethora of parties, with a few in position to form a coalition.

What we are likely to see in Egypt is not a repeat of Iran, where fundamentalists took undisputed power, but a repeat of Iraq, where Sunni religious parties did well initially but started to fade, divide and evolve as the powerful Sunni preference for laymen of no particular religious distinction comes to the foreground. Sunni Islam has no clerical hierarchy of the holy — it’s tailor-made for nasty arguments among men who dispute one another’s authority to know the righteous path. If the Brotherhood can be corralled by a democratic system, the global effect may not be insignificant.

We have a chance in Egypt to be lucky. Democratization there, like democratization of Iran, could thwart the ideologies and fear that move poor countries to spend fortunes on nuclear weapons. The United States is not without influence. We can push hard for a quick transition to democratic rule. The Egyptian Army, historically no friend of democracy or civil liberties, is now dependent on American money and advanced weaponry. If it continues to stand behind Mr. Mubarak, if Egyptians start to die in large numbers, Washington shouldn’t hesitate to play hardball.

Elections should not be at the end of some long, undefined democratic transition, which Mr. Mubarak or his minions would surely use to abort democracy. Egypt needs elections sooner, not later. More convincingly than any president before him, Barack Obama can say, “We are not scared of Muslims voting.” He can put an end to the West’s deleterious habit of treating the Middle East’s potentates respectfully and the Muslim citizenry like children.

Reuel Marc Gerecht, a senior fellow at the Foundation for Defense of Democracies and a former Middle Eastern specialist in the C.I.A.’s clandestine service, is the author of the forthcoming book “The Wave: Man, God and the Ballot Box in the Middle East.”