After nisiting Nankana Sahib, we reached Hasan Abdal railway station at about 2 AM on 15 November 2016. Hasan Abdal is best known for Panja sahib, ‘The Hand mark of Guru Nanak on a boulder.’ According to a version, Guru Nanak reached Hassan Abdal through Attock. From Khairabad the Guru crossed Attok River in Vaisakh 1578 Bikrami and reached Hasan Abdal, now famous for Panja Sahib.[2] (Giani Gian Singh, p.286). This is an Ancient city situated at a distance of 45 kilometres from Rawalpindi to the west side of the mountain.It is hilly area. A few places have natural fountains. Saintly persons usually take abode there. Hasan Abdal was established around a dharamsala constructed by a 'gujar' (person rearing milk animals) named Hassan. The name of the place 'Hassan Abdal' is said to have origin in the name Hassan itself'[3]. 'Hassan's grave still exists near the hill'. [4] Guru Nanak is said to have met Hassan while he was looking after his pet animals. He presented milk to the Guru, which was taken both by the master and Mardana. [5].

As per a legend Guru Nanak and Mardana had been traveling in the heat of summer. Reaching Hasan Abdal he sat in the cool shadow of a peepal tree and started singing hymns in praise of the divine on the music of rebec played by Mardana. Congregations of people from all around the area gathered around the Guru. Keen to listen to the discourses of the Guru, the people turned up from far and near. They were entranced by the sublime hymns. Close by a fakir named Wali Qandhari used to live on the hill. Wali Qandhari' belonged to Rafzi Sect of Shias. His original name was Yar Ali'.[6] His ego was hurt seeing the large gathering around the Guru but could not help. After the singing came to an end, Mardana expressed that he felt very thirsty. When he inquired where to obtain water to drink, he learned that a scarcity of water plagued the area. The only water available had been diverted by Wali Qandhari (Kandahar), dwelling at the top of the hill who had a reservoir fed by a natural spring. Guru Nanak advised Mardana to walk up the hill, introduce himself, and request a drink from the Wali's spring. Mardana went to the spring of water near Wali Qandhari’s residence.

Under the blazing noonday sun, going up the hill was no easy task. Mardana had to climb mostly on his hand, and knees as the stones were slippery. Panting and fluffing, he went up to Wali Qandari and requested for water'5.

Wali Qandari looked up and said "Who are you and what brings you here?"

"I and my master are on our way to Kartarpur. I felt thirsty. As there was no water anywhere near, I came to see if you could help me".

"What is your name?"

"Who is your Master? What is his name?"

"Guru Nanak: A Hindu by caste but a man of God: A prophet: A Nobel soul."

"A prophet, and a Hindu, you said? Go and get water from him. I have nothing for you an infidel.''

Mardana returned deeply disappointed and narrated all to Guru Nanak. Guru Nanak said, "You must not have displayed enough humility. Remember! We fakirs have these weapons; weakness, humility and sweet words. Go back and humbly request for water". Mardana gathered strength and went up the hill perspiring. "You are back again?"

"Salaam-a-Lekam: My master sends you greetings and requests for some water for me", Mardana bowed and said softly. "Go away and ask your master to find you the water. I cannot understand how a Muslim can accept a Hindu as his Peer. You are an apostate and can expect no mercy from me". Dejected and depressed, Mardana returned to Guru Nanak and told what had happened again.

Mardana returned to the Guru in a very sullen mood and told all what happened at the hill to Guru Nanak. Guru Nanak moved a small boulder nearby: Lo! The water gushed out. Actually this was an outlet of the spring at the hill. Gushing out water of the spring down below, drained the spring at the hill. This angered Wali Qandhari who was watching this. In anger he pushed a huge boulder downwards. As the boulder rolled down on to the Guru, the Guru stopped it with his hand. The mark of his palm was etched on the boulder instantly. Seeing Guru Nanak unharmed and the boulder stopped by the Guru on his palm, Wali Qandhari realized his fault and ran down the hill and held discussions with the Guru, which are recorded hereunder.

Wali, "Whose follower are you"?

Wali "Is your God alive or dead"?

Guru Nanak,"My God is everyone's God and is ever living".

Wali "How can one reach him"?

Guru Nanak: "He is everywhere. You just have to remember and He will listen to you".

'I utter, one supplication before thee. Hear it 'O' my Creator you are the True, Great, Merciful and Faultless Cherisher. The world is perishable; know it for certain in your mind. Azrail, death's courier, has caught me by the hair of head. Yet I know it not in the least in my heart. When I fail and the time of last prayer comes, there shall be no one to rescue me. Night and day, I wander in avarice and think of and do evil. I do not, ever do good deeds, I am unfortunate as also miserly negligent, shameless and without Your fear, O Lord. Says Nanak, I am your slave and the dust of the feet of Your servants.'

Guru Nanak told him to hold his ego and anger and treat all men as equal since all are the creation of One and the same God. He blessed him that, “Your lamp will keep burning.”

Wali Qandhari was enchanted by Guru's discourse and fell at Guru Nanak's feet and asked for forgiveness. Guru Nanak told him that love is the one and the only thing by which one could win over God and His people.

A magnificent Gurudwara, known as Panja Sahib has been built at the place. The stone, with the imprint of Guru Nanak's hand (Panja) forms part of the pool adjacent to the Gurdwara. The town of Hassan Abdal is now called Panja Sahib. 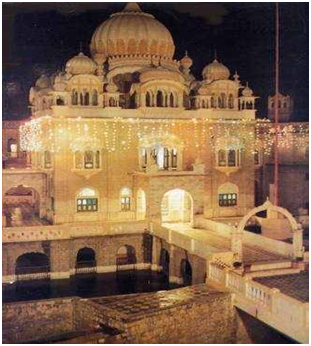 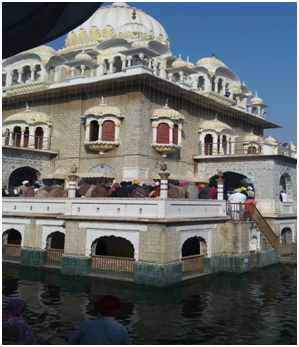 Guru Nanak stayed at Hassan Abdal for some days and then proceeded towards Kartarpur on the main Peshawar-Lahore road constructed by Sher Shah Suri.

Hassan Abdal is 48 km from Rawalpindi. The spring Guru Nanak opened continues to provide pure water which flows from a natural fountain beneath the boulder where his hand print is embedded. Despite attempts to remove it, the guru's hand print adorns the boulder to this day and can still be seen at the sarovar of Gurdwara Sahib Panja Sahib in Pakistan. [7]

The control of the administration of the Gurdwara remained with the hereditary Mahants. After Mahant Mittha Singh passed away a march was led by Bhai Kartar Singh Jhabbar to get control of Gurdwara. The Jatha reached Panja Sahib on 18 November, 1920 and the S.G.P.C. gained possession.. A Singh resides in the campus of the Gurdwara from the board and maintains the pious Maryada.[8]


Our travelling has been during nights only and we were not able to observe the area or general condition of the people en-route. After getting down the train we boarded into Government organized buses paying the nominal charges of Rs 30/- per passenger and reached the room allotted in the Panja Sahib complex. This rate of bus travel was the same from and to all the railway stations during our journey. A 12x12 room was allotted for 10 people. It was difficult to sleep in such cold in one blanket which I could arrange. Since the day was going to dawn soon, I preferred to have bath, go to Gurdwara Sahib; have a dip in water tank around the Gurdwara and darshan of the hand mark (panja) of Guru Nanak. 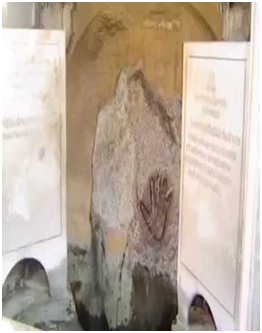 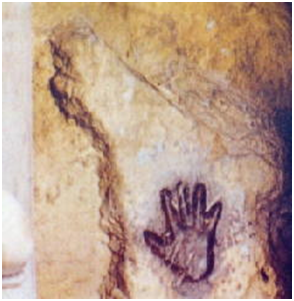 As I proceeded towards the Gurdwara, I found the total calm, serenity all over in the early hours of the morning. The Gurdwara appeared majestic in the flood of coloured lights. The water of the tank was extremely clean. Large fish of many colours swam in the water with great magnanimity. Water was flowing out of the chashma (fountain) from near the boulder thrown on Guru Nanak by Wali Kandhari. What a heavenly feeling to be there at this hour of time! I felt really blessed to enjoy such a magnanimous moment and sat in silent in front of the sanctum sanctorum to meditate. I recalled the great even how in the scorching heat, Mardana feeling thirsty was asked by the Guru to climb up the hill and get a sip of water. I could feel the limping Mardana climb three times to hear a big ‘NO’ each time and also requesting Guru Nanak to save his life. I also felt the water gushing out once the Guru removed a stone and flowing out majestically in the form of stream which it still does till date. There was no surprise watching thirsty Mardana rushing towards the water and gulping it down as if it was the first time he had seen the water. Next came to my mind the scene of roaring boulder coming down from the hill which scares Mardan away but Guru Nanak sitting calmly taking out his palm to stop. I had not heard anyone else doing this except the great Guru Nanak. It was no doubt amazing! Feeling the presence of Guru Nanak nearby itself was so solacing and ecstatic to be beyond words to describe.

It was quite a time when I had been linked to the great scene when I heard the reverberating shabads sung by the Ragis from Gurdwara. These added to the heavenly atmosphere. By this time it was about 5 AM when path of 5 Banis started and I had the privilege of enjoying the path as well in full mental peace. 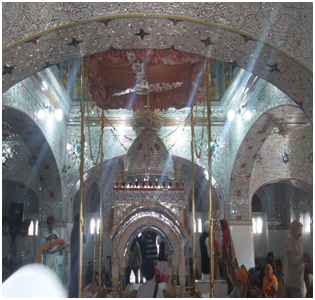 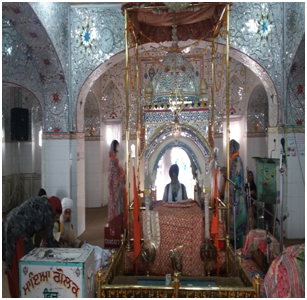 Sanctum sanctorum Panja Sahib Gurdwara
Gurdwara complex was very huge with inbuilt accommodation for over 3000 people and a school for the children of the Sikhs residing there in. It was told that about 300 families of Sikhs were in Hasan Abdal. . A very elegant residential block has been constructed. There is a school with other facilities in the Gurdwara complex. The Gurdwara is being maintained well by Evacuee Trust Property Board, Government of Pakistan and many development works like 100 additional rooms in the residential complex, double storey langar hall, landscaping of the park, installation of solar energy panels for uninterrupted power supply, overhead water tank with a capacity of 5,000 Gallons and marble flooring of the entire complex 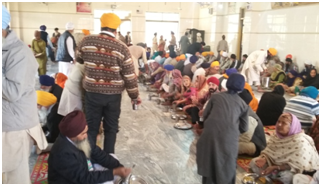