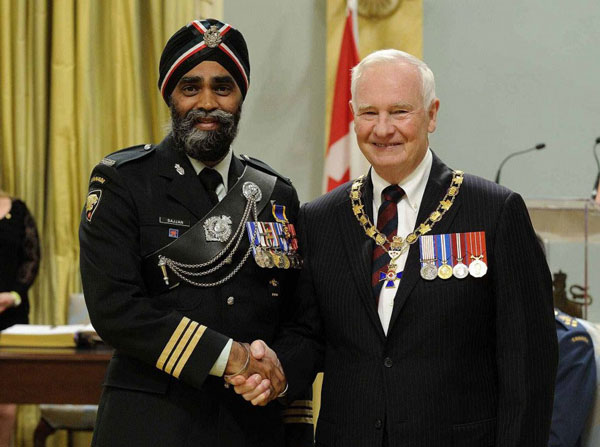 You got to love Canada, Harjit Singh Sajjan - the first Sikh and immigrant from India has been named the National Defense Minister of Canada.

Harjit Sajjan has four operational deployments; one to Bosnia and three deployments to Afghanistan. He has been awarded the following honours in recognition of his service to Canada:

Harjit Sajjan was a member of the Vancouver Police Department for 11 Years serving in South Vancouver and was selected as a Detective for the Gang Crime Unit. Harjit has long been advocating for education and mentorship programs that engage the youth to become more active members of society, while strengthening youth defense against the rule of gangs and drugs.

Born in a small village in India, Harjit learned the importance of the very basic human necessities at a young age. He is immensely grateful for the privilege of being a Canadian and now participates in humanitarian efforts where ever he can make a difference. He and his wife have four sponsored children and support many charities that promote health and education to impoverished children.

Trudeau appointed 30 members to his cabinet, half of them women. Eighteen of the newly minted ministers are rookies who won election for the first time on Oct. 19.

The new prime minister has turned to experienced hands for some of the most senior portfolios, while also putting his trust in newcomers to run other departments.

First-time MP Catherine McKenna, from Ottawa Centre, has been appointed environment minister. The other new Liberal star from the area, Orléans MP Andrew Leslie, a former lieutenant general in the Canadian military, was not appointed to cabinet.

Among the other highlights:
• Bill Morneau, a first-time Toronto MP who was executive chairman of one of the country’s largest human resources companies, becomes Finance minister.

• Carolyn Bennett is Minister of Indigenous and Northern Affairs.

• New Brunswick MP Dominic LeBlanc becomes Leader of the Government in the House.

• Marc Garneau is the new Minister of Transport.