Guru Nanak In Turkey And Beyond Dr Dalvi

GURU NANAK IN TURKEY AND BEYOND

Bhai Mardana requested: “If we have come this far, why not visit Turkey (Rum) and Sham Desh.” Guru Nanak said, “Let us go.” Guru Nanak and Mardana met the king of Turkey. [1] King of Turkey was Selim I (1512-1520 AD) son of Bayezid II or Sultân Bayezid-î Velî (December 3, 1447 – May 26, 1512) who was the eldest son and successor of Mehmed II. Bayezid II during his reign consolidated the Ottoman Empire and thwarted a Safavid rebellion soon before abdicating his throne to his son, Selim I. He is most notable for evacuating Jews from Spain after the proclamation of the Alhambra Decree and resettling them throughout the Ottoman Empire. Bayezid II ascended the Ottoman throne in 1481.[1] [2] Like his father, Bayezid II was a patron of western and eastern culture and unlike many other Sultans, worked hard to ensure a smooth running of domestic politics, which earned him the epithet of "the Just". 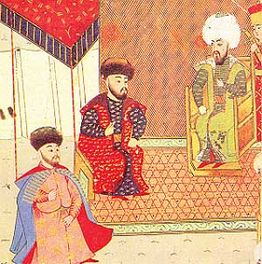 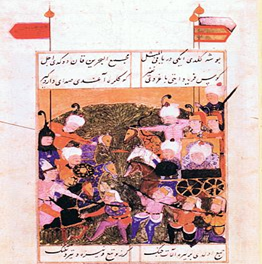 Bayezid II's final years saw a succession battle between his sons Selim I and Ahmet. Ahmet unexpectedly captured Karaman, an Ottoman city, and began marching to Constantinople to exploit his triumph. Fearing for his safety, Selim staged a revolt in Thrace but was defeated by Bayezid and forced to flee back to the Crimean Peninsula. Bayezid II developed fears that Ahmet might in turn kill him to gain the throne and refused to allow his son to enter Constantinople. Selim returned from Crimea and, with support from the Janissaries forced his father to abdicate the throne on April 25, 1512. [3]

Turkey now is a parliamentary republic in Eurasia, largely located in Western Asia bordered by eight countries: Syria and Iraq to the south; Iran and Armenia, and the Azerbaijani exclave of Nakhchivan to the east; Georgia to the northeast; Bulgaria to the northwest; and Greece to the west; the Black Sea is to the north, the Mediterranean Sea to the south, and the Aegean Sea to the west. [4] Turkey's location at the crossroads of Europe and Asia makes it a country of significant geostrategic importance [5] 800 km (500 mi) wide, with a roughly rectangular shape [6] It lies between latitudes 350 and 430 N, and longitudes 250 and 450 E. Turkey's area, including lakes, occupies 783,562 [7] square kilometers (300,948 sq mi), of which 755,688 square kilometers (291,773 sq mi) are in Southwest Asia and 23,764 square kilometers (9,174 sq mi) in Europe.[6] The country is encircled by seas on three sides. [8] The European section of Turkey, East Thrace (the easternmost region of the Balkan Peninsula), forms the borders of Turkey with Greece and Bulgaria. The Asian part of the country is comprised mostly of the peninsula of Anatolia. It is home to the sources of rivers such as the Euphrates, Tigris, and Aras. [8]

Starting from the late 13th century, the Ottomans united Anatolia and created an empire encompassing much of Southeastern Europe, Western Asia, and North Africa, becoming a major power in Eurasia and Africa during the early modern period. The empire reached the peak of its power between the 15th and 17th centuries, especially during the 1520–66 reign of Suleiman the magnificent. During Guru Nanak’s travels Selim I ruled the country and its boundaries had started spreading. Capital is Ankara 39°55′N 32°50′E and the largest city is Istanbul 41°1′N 28°57′E. The official language is Turkish. The Anatolian peninsula, comprising most of modern Turkey, is one of the oldest permanently settled regions in the world. The European part of Turkey, called Eastern Thrace, has also been inhabited since at least forty thousand years ago and is known to have been in the Neolithic era by about 6000 B.C. [11]

In 1514, Sultan Selim I (1512–1520) successfully expanded the empire's southern and eastern borders by defeating Shah Ismail I of the Safavid dynasty in the Battle of Chaldeans. In 1517, Selim I expanded Ottoman rule into Algeria and Egypt and created a naval presence in the Red Sea. He assumed the title of Caliph after defeating Egypt in a bloody battle near Aleppo (Halab). Subsequently, a competition started between the Ottoman and Portuguese empires to become the dominant sea power in the Indian Ocean. The Portuguese presence in the Indian Ocean was perceived as a threat for the Ottoman monopoly over the ancient trading routes between East Asia and Western Europe (later collectively named the Silk Road). This important monopoly was increasingly compromised following the discovery of a sea route around Africa by Portuguese explorer Bartolommeo Dias in 1488, which had a considerable impact on the Ottoman economy. [12] The Turkish rulers did not interfere in the religion of the defeated states.

The Ottoman Empire's power and prestige peaked in the 16th and 17th centuries, particularly during the reign of Suleiman the Magnificent. The empire was often at odds with the Romans in its steady advance towards Central Europe through the Balkans and the southern part of the Polish-Lithuania. [13] In the east, the Ottomans were often at war with Safavid Persia over conflicts stemming from territorial disputes or religious differences between the 16th and 18th centuries. [14] 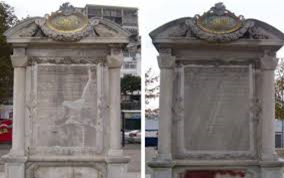 Description: Image result for Guru Nanan
There was a Sikh shrine in Baghdad to suggest that the Guru visited as far as Iraq during the fourth Udasi (missionary journey). Dr. Davinder Singh Chahal had visited Istanbul in 1994 and saw a pillar 15 feet high and 6 feet wide in a park which had a script in Arabic and Turkish language containing the reference of Guru Nanak in its first line. He could not figure it out at that time. This year when he visited Pakistan, he succeeded in decoding the pillar script with the help of two Pakistani scholars Iqbal Kaiser and Sayyad Afzal Hydar. Gur Kirpal Singh Ashk mentions, “The most important achievement is that I was able to decipher the writings on a big stone plaque (10 ft high and 4 feet wide) installed in a park on the seashore of Istanbul, Turkey. Mr. Iqbal Qaiser, the author of the Sikh Shrines in Pakistan and Mr. Syed Afzal Haider, Senior Advocate Supreme Court of Pakistan and the author of a book, Baba Nanak, helped me to decipher the writing which indicated that it is definitely connected with Guru Nanak. It is surprising that a plaque with writings about Guru Nanak is installed in Istanbul. We are visualizing that Guru Nanak's travel could be extended to Turkey after his visit to Mecca and Medina before coming back to India via Baghdad. Our further research for deciphering the whole writing is going on.”

The finding of a stone tablet in the European side of Istanbul, by Dr. D.S. Chahal, points to Guru Nanak’s visit to the country beyond. Gul Baba of Hungry was the teacher of Suleiman, the son of Salim-I, who (Suleiman) erected this tablet in Turkey language, the official language of Ottoman Empire.