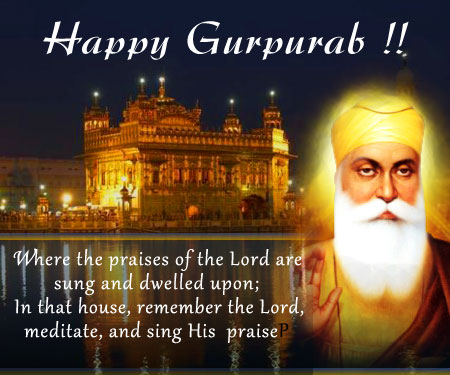 Guru Nanak Gurpurab, also known as Guru Nanak's Prakash Utsav and Guru Nanak Jayanti, celebrates the birth of the first Sikh Guru, Guru Nanak.[3] This is one of the most sacred festivals in Sikhism.[4]

The festivities in the Sikh religion revolve around the anniversaries of the 10 Sikh Gurus. These Gurus were responsible for shaping the beliefs of the Sikhs. Their birthdays, known as Gurpurab (or Gurpurb), are occasions for celebration and prayer among the Sikhs.

Guru Nanak, the founder of Sikhism, was born on April 15, 1469[3] in Rai-Bhoi-di Talwandi in the present Shekhupura District of Pakistan, now Nankana Sahib.[5] His birth is celebrated on Kartik Poornima, the full moon day in the month of Kartik. In the Gregorian Calendar, the celebration usually falls in the month of November, but its date varies from year to year, based on the traditional dates of the Indian calendar.[6] It is a Gazetted holiday in India.

The celebration is generally similar for all Gurpurabs; only the hymns are different. The celebrations usually commence with Prabhat Pheris. Prabhat Pheris are early morning processions that begin at the Gurudwaras and proceed around the localities singing hymns. Generally two days before the birthday, Akhand Path (a forty-eight-hour non-stop reading of the Guru Granth Sahib, the holy book of the Sikhs) is held in the Gurdwaras.

The day prior to the birthday, a procession, referred to as Nagarkirtan,[7] is organised. This procession is led by the Panj Pyaras (Five Beloved Ones).[6][8] They head the procession carrying the Sikh flag, known as the Nishan Sahib and the Palki (Palanquin) of Guru Granth Sahib. They are followed by teams of singers singing hymns[8] and devotees sing the chorus. There are brass bands playing different tunes and 'Gatka' teams display their swordsmanship through various martial arts and as mock battles using traditional weapons.[6][7] The procession pours into the streets of the town. The passage is covered with banners and gates decorated flags and flowers, for this special occasion.[6][7] The leaders spreading the message of Guru Nanak.[6] 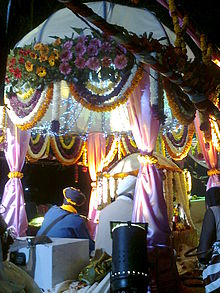 
On the day of the Gurpurab, the celebrations commence early in the morning at about 4 to 5 am.[6][7] This time of the day is referred to as Amrit Vela. The day begins with the singing of Asa-di-Var(morning hymns).[6][7] This is followed by any combination of Katha[7] (exposition of the scripture) and Kirtan (hymns from the Sikh scriptures), in the praise of the Guru.[6] Following that is the Langar, a special community lunch, which is arranged at the Gurudwaras by volunteers. The idea behind the free communal lunch is that everyone, irrespective of caste, class or creed,[9] should be offered food in the spirit of seva (service) and bhakti (devotion).

Night Prayer sessions are also held in some Gurudwaras, which begin around sunset when Rehras(evening prayer) is recited, followed by Kirtan till late at night.[6] The congregation starts singing Gurbani at about 1:20 am at night, which is the actual time of birth of Guru Nanak. The celebrations culminate at around 2 am.[6]

Guru Nanak Gurpurab is celebrated by the Sikh community all over the world and is one of the most important festivals in the Sikh calendar. The celebrations are especially colourful in Punjab, Haryana, and Chandigarh. Even some Sindhis celebrate this festival.

congratulations for your input and thank u Baba

Millions of Sikhs are celebrating the Birth Anniversary of the GURU NANAK SAHIB today who fought against religious bigotry, sexist culture, bankrupt morality, and empowered an average person economically, spiritually, and politically. He even went to jail in order to combat genocide. Try doing just one of these things to truly celebrate his birthday. Happy Gurpurab!

Simro Raam Naam Ath Nirmal Awar | ਸਿਮਰਹੁ ਰਾਮ ਨਾਮੁ ਅਤਿ ਨਿਰਮਲੁ
]This is a shabad mentioned by respected member Gyani ji a few times so I was keen to explore further. I have given the shabad and literal word meanings. Please have a go at putting these together...