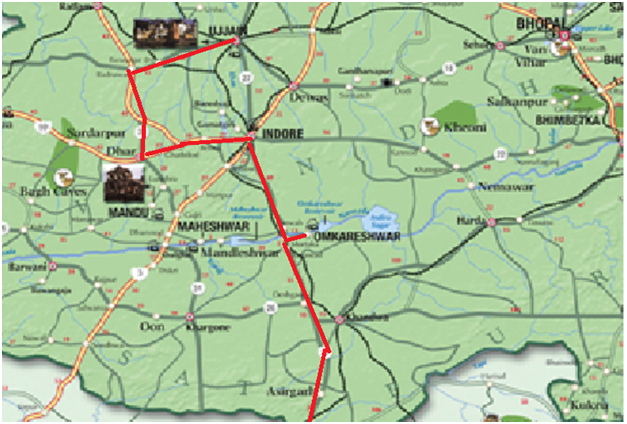 Omkareshwar is one of the most sacred towns situated in Madhya Pradesh on Indore-Khandwa Highway. The holy town is situated on the meeting point of two rivers- Narmada and Kaveri. Meeting between two of these most prominent rivers of India leaves the island in the shape of Hindu symbol Om hence named as such. The town consists of two ancient shrines-one is Omkareshwar (whose name means "Lord of Omkaara or the Lord of the Om Sound") located in the island and Amareshwar (whose name means "Immortal lord" or "lord of the Immortals or Devas") located on the south bank of Narmada River on the mainland. Omkareshwar temple situated on Mandhata island in river Narmada houses one of the 12 Jyotirlingas. 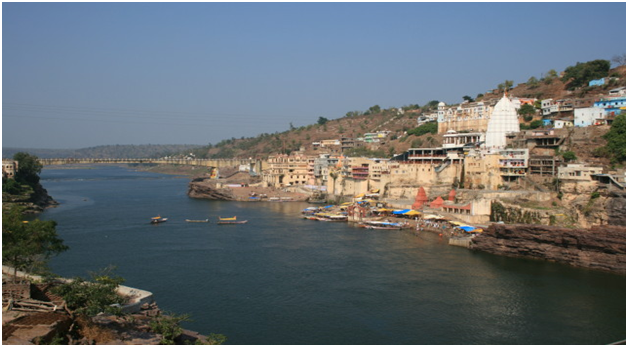 The dam on Narmada has increased the importance of the place and also visitor attraction. Water from this dam is diverted to Shipra River for Ujjain Mahakumbh and feed Indore.

Every Monday the golden idol of Lord Omkar is shown to the pilgrims and visitors with bands, drums, and priests gathering in procession, after which they go to the river to finish their worship. Temple permits are required for photography. The entire area is bounded by mountains presenting a very beautiful view. The view around the island is also serene and relaxing.

In 10th century AD Parmar King Udayaditya installed 4 stone inscriptions here with some holy couplets of Shiv Mahima inscribed on these. The temple then came to be known as Amaleshwar Temple. Thousands of visitors around the globe come here at on Mahashivaratri to celebrate union with God.


It was ruled by Parmars followed by Bhils and Rajpits in 12th and 13th century; during the period the temple areas flourished. In 14th Century however, after Ghauri’s invasions rule passed on to Sultans. During their period ancient temples and idols were destroyed. Mughals especially Aurgzeb caused firther devastation. The remains of ancient temples and structures around Mandhata are spread around on the adjoining hill feature. The new construction of temples came up close to Narmada. 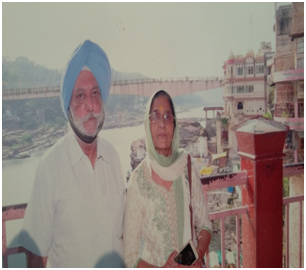 The airports closest to Omkareshwar are Indore (77km) and Ujjain (133km). The nearest railway station is 12 km away, but it is not on the mainline and is not connected to the major cities. The nearest major railway station is Indore (77 km). You can also board a bus from Ujjain, Indore or Khandwa. Distance of Omkareshwar from Indore and Maheshwar is 80 kms, Mandu and Ujjain is 145 kms, Burhanpir 125 Kms , Khandwa kms and Bhopal 280 kms. It is about 12 miles (20 km) from Mortakka in Madhya Pradesh.


During fairs and festivals like Maha-Shivratri, Diwali, Dussehra, Navratra and Vasant Panchami local people gather in large numbers here to celebrate. Most of the visitors are from nearby townships and cities like Indore, Khandwa, Ujjain, Dhar etc. During one such fair Guru Nanak visited this area in 1511 AD during his itinerary (udasi) to south and reached here after visiting Ujjain Dharanagari (Dhar), Betma and Indore. During his visit Guru Nanak went to Omkareshwar and Amleshwar temples and held discussions with the pundits. He did not agree with them the God as OM created the earth at this location. He explained them the actual meaning of Omkar as against the one depicted by them. His description is called Bani Dhakhni Ongkar and is found recorded in Shri Guru Granth Sahib pages 929 to 938.


Ramkali, First Mehl, Dakhani, Ongkaar: One Universal Creator God. By The Grace Of The True Guru: From Ongkaar, the One Universal Creator God, Brahma was created. He kept Ongkaar in his consciousness. From Ongkaar, the mountains and the ages were created. Ongkaar created the Vedas. Ongkaar saves the world through the Shabad. Ongkaar saves the Gurmukhs. Listen to the Message of the Universal, Imperishable Creator Lord. The Universal, Imperishable Creator Lord is the essence of the three worlds. || 1 || Listen, O Pandit, O religious scholar, why are you writing about worldly debates? As Gurmukh, write only the Name of the Lord, the Lord of the World. || 1 || Pause || Sassa: He created the entire universe with ease; His One Light pervades the three worlds. Become Gurmukh, and obtain the real thing; gather the gems and pearls. If one understands, realizes and comprehends what he reads and studies, in the end he shall realize that the True Lord dwells deep within his nucleus. The Gurmukh sees and contemplates the True Lord; without the True Lord, the world is false. || 2 || Dhadha: Those who enshrine Dharmic faith and dwell in the City of Dharma are worthy; their minds are steadfast and stable. Dhadha: If the dust of their feet touches one’s face and forehead, he is transformed from iron into gold. Blessed is the Support of the Earth; He Himself is not born; His measure and speech are perfect and True. Only the Creator Himself knows His own extent; He alone knows the Brave Guru. || 3 ||