The title caught your eye? Good. You might be wondering what the connection between the two is. Guru Arjan’s time was largely in the late 16th and some in the early 17th centuries. How do I hope to link him to 1984, and to what purpose? 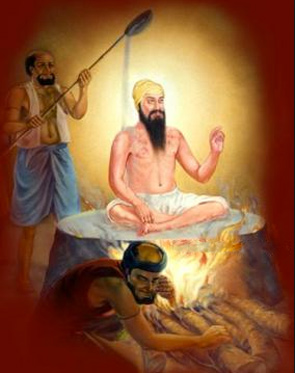 The Orwellian events of 1984 are now history, almost a generation old. If the connection to the Guru surprises you now imagine how astonishing it would seem a few years on – like, say another 50 years or so.

It’s only 67 years but despite all the available material a new generation of Jews sometimes looks askance at the debate on the holocaust. Deniers of the holocaust already exist – people like President Mahmoud Ahmadenijad of Iran. Go back a step to early 20th century; if within Turkey you ever suggest that the Armenian Massacre occurred you would be tried in court. If in France you deny that it occurred you would again face prosecution. Such are the vagaries of what goes as evidence-based history.

India, too, is spawning a new generation of deniers who minimize the army attack on the Golden Temple as well as the army occupation of 40 other gurduaras of the Sikhs throughout Punjab in 1984. They also deny the violence – by all credible accounts an attempted genocide – that occurred in the capital city of Delhi and other towns across India.
Why highlight the coupling of 1984 with Guru Arjan? Because I have come across many Sikhs – young and old – who are absolutely floored by the connection. I rest my case with a simple example. In 1984 my wife was growing up in Delhi. She was almost caught up in the murderous frenzy of the planned carnage of Sikhs over three days (October 31--November 2) in Delhi. But she was unaware of the fact that the attack on the Harmander (Golden Temple) occurred on the martyrdom day of Guru Arjan that is commemorated annually by Sikhs all over the world. Apparently the news media and television in India glossed over the connection; outside India it was nothing but a trivial coincidence.
The fact that the government controlled media in India deliberately down played the connection is to be expected. But that Sikhs were and remain unaware of it is a bit of a shame and a puzzling matter.

A few basics to put matters in some perspective: Guru Arjan was the first martyr of the Sikhs – a faith that has produced more martyrs than we can count. And June is the hottest month, when the summer heat is absolutely blistering. He was martyred most mercilessly by placing on hot sand over an open fire in the summer heat. And he accepted this with equanimity over the days that the torture lasted. He died nobly.

His martyrdom is commemorated all over Punjab every year. On that day gurduaras all over Punjab, especially the Harmander in Amritsar, are teeming with hundreds and thousands of pilgrims – men, women and children.

When in 1984 the Indian governments sent its army into Harmander they selected Guru Arjan’s martyrdom day for the attack when ordinary innocent Sikhs would be swarming the gurduaras. Then they sealed the place and let loose a reign of terror. Why did they pick that day? I leave that for readers to explore. Were India’s political leaders unaware of the connection? That would be incompetence of a high order and would cast doubt on their right to rule a people of whom they were so ignorant.
Attacking the Harmander on Guru Arjan’s martyrdom day would be like attacking Vatican on Good Friday or the Wailing Wall on Yom Kippur. It’s beyond thoughtless.

What did this attack reap? Perhaps more bitterness and anger in the Sikhs.

What we Sikhs need to do is to cement the connection between Guru Arjan’s martyrdom and attack, not to dilute it. But that is what we seem to be doing.

After 1984 it might have been more useful to fix the exact timing of historical events by the Common Era calendar that is used worldwide. But that was not to be.

This would prevent the kind of oddity that we are seeing this year. The vagaries of the calendar have kept the attack days on June 3-5 and moved Guru Arjan’s martyrdom day to June 12th this year.

Because the historical connection between the two events is now sundered it means that the significance and cruelty of the attack are minimized. The fact that both occurred on the same day would now appear incidental. And this connection was no accident but planned to do maximum damage.

A new generation would have to labor much harder to rediscover the connection between the two. And what would we have gained by weakening our history thus? Absolutely nothing.

Remember Santayana’s words “that those who do not remember their past are condemned to repeat it.”