What they undertook to do ​
They brought to pass;
All things hang like a drop of dew
Upon a blade of grass.
Gratitude To The Unknown Instructors by William Butler Yeats
[This article is dedicated to those nameless Guru Ke Kirtaniye who faithfully preserved the Gurmat Sangeet Tradition through the centuries of tumult that the Sikh Panth lived through]

These kinds of questions are incredibly hard to answer, for several reasons. The conveniences that we take for granted, such as the ability to record music are after all less than a century old ! While we are fortunate in having the Sri Guru Granth Sahib, which is unequivocally the word of the Guru, there is no comparable, unequivocal, authoritative source of musical knowledge that defines or illustrates Gurmat Sangeet in its pristine form.

The problem is compounded by a couple of other factors. Our sacred music, and indeed the larger body of Classical music from the Indian subcontinent, has over the centuries, been transmitted through an oral, rather than a written tradition. Western Classical music, in contrast has benefited from a long written tradition that has provided the tools for the precise documentation of its nuances, which have guaranteed its preservation.

Further, as we are all aware, the Panth was in a constant state of turmoil after the passing of Sri Guru Gobind Singh Ji in the early eighteenth century. Our focus was on preserving our very existence, rather than thoughtfully documenting our musical traditions and preserving them for posterity ! The net result was that the preservation and transmission of the Gurmat Sangeet was left to the Rababis and Kirtaniyas who survived. The method was one on one instruction, typically father to son. The tradition was completely oral.

You will be surprised to learn that the first viable notational systems for the documentation of Hindustani Classical music are no more than a century old ! Both Hindustani Classical music and Gurmat Sangeet, of course, are much older ! Two visionary scholars and musicians, Pandit Vishnu Narayan Bhatkhande and Pandit Vishnu Digambar Paluskar, were responsible for building these systems of musical notation. Bhatkande’s system, simpler and arguably more intuitive survived and thrived. As an aside, the story of Bhatkande’s tribulations, over a lifetime of hard work and hustling to extract and document pristine compositions from the un-cooperative guardians of an ancient oral tradition, is absolutely fascinating, and well worth digging into !

In case you are wondering Gentle Reader, what the doings of two Pandits who lived a Century ago, could possibly have to do with Gurmat Sangeet, hang in there! There is a point to all this.

Let us go back to the problem of understanding and recreating Gurmat Sangeet in its pristine form. The famous Sikh philosopher and savant, Bhai Vir Singh Ji emphasizes the importance of ancient compositions or ‘Dharnavan’ in an essay titled Shabad De Bhav Te Raag Di Taseer, which appeared in Gurmat Sangeet Par Hun Tak Mili Khoj, a seminal work on Gurmat Sangeet published by the Chief Khalsa Diwan in 1958 . An excerpt from the essay :

"Guru Arjan paid particular attention to the tunes in which Shabads were sung; it is extremely important that Shabads be sung in those tunes, conforming to the relevant Raga, which evoke the same emotions as the contents of the Shabad"

Bhai Vir Singh Ji goes on to state that when Guru Arjan started the tradition of Ragis singing Gurmat Sangeet, he instructed them in this unique way of singing to ensure that Gurmat Sangeet would always be aligned with the Gurbani that it served as a vehicle. The specific Raga based tunes that have been prevalent since the time of Guru Arjan essentially embody the essence of Gurmat Sangeet.

Aha ! A ray of light ! But wait ! Where are these seminal tunes and melodies ? Where is one to find them ? Can we find them on the inexpensive, well produced cassettes by ‘popular’ Ragis that flood the stalls outside major Gurdwaras ? Is there an connection between these seminal melodies and the toe tapping, over instrumented commercial music that masquerades as Gurmat Sangeet today ? (That by the way was a short rant disguised as a rhetorical question !)

The good news is that all is not lost ! The rich oral tradition that was the torch bearer for traditional Gurmat Sangeet in the last three centuries comes to our rescue here. This tradition however was not sufficient to preserve Gurmat Sangeet because it had essentially started to fall apart in the last century, under the onslaught of ‘popular’ or ‘commercial’ Kirtan. The decline was accelerated by the proliferation of inexpensive cassette players and dirt cheap cassettes and a never ending supply of tacky film and popular music influenced melodies, marketed as Gurbani Kirtan or Gurmat Sangeet.

This is where the work of Pandit Vishnu Narayan Bhatkhande intersects with the oral Gurmat Sangeet tradition, and in fact renders it a great service !

In 1961, the Shiromani Gurdwara Prabhandak Committee published two volumes titled Gurbani Sangeet by Gian Singh Ji (Abbotabad). Gian Singh Ji was born in 1897 in Abbotabad, now in Pakistan, into an affluent family. His father, Sardar Bhagwan Singh Ji, was fond of Kirtan and started teaching his young son to sing. By the time he was thirteen, Gian Singh Ji was quite adept at singing Gurbani Kirtan. He would seek out Ragis and Rababis and with their help master the old Gurmat Sangeet melodies that their families had preserved over the years. Gian Singh Ji was an enthusiastic participant in the Gurdwara Reform movement and a member of the early Shiromani Committee.

After the partition of India in 1947, Gian Singh Ji left Abbotabad and came to Delhi, where he quickly re-established himself as a businessman. In Delhi he embarked upon the task of documenting the seminal melodies that he had learned over his lifetime. While Gian Singh Ji had colleted a large repertoire of shabad compositions, he was no musicologist. He engaged the services of a Rababi called Bhai Taba Ji and a young Dilruba player, who used to accompany Bhai Samund Singh Ji and had served at Sri Harmandir Sahib as well. Employing the notational system created by Pandit Vishnu Narayan Bhatkhande, with the help of Bhai Taba ji and the young Dilruba player and musicologist, Gian Singh Ji completed the monumental task of documenting 309 Shabads, that embody the essence of Gurmat Sangeet.

Volume 1 of Gurbani Sangeet contains 192 shabads in 60 Ragas of the Sri Guri Granth Sahib. (Yes indeed, that is not a mistake; the Guru Granth Sahib has more than 31 Ragas, but that is a subject for another article). Volume 2 contains 117 shabads in 59 additional Ragas, which have traditionally been used for Gurmat Sangeet compositions. 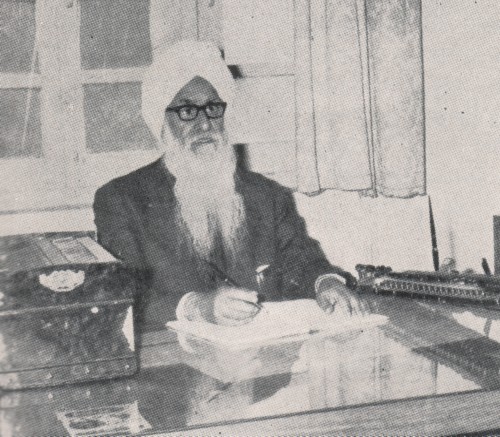 
Thus did the task of documenting a rich, centuries old oral tradition, begin. Several other works followed. Among the most notable are the four volume Gurmat Sangeet Sagar by Gyani Dyal Singh Ji and the two volume Gurbani Sangeet Prachin Reet Ratnavali by Bhai Avtar Singh, Bhai Gurcharan Singh Ji. We will discuss these and other excellent works in subsequent articles.

On a very personal note, as a Kirtaniya (albeit, not a particularly good one!), I feel a tremendous debt of gratitude to Sardar Gian Singh Ji (Abbotabad), Gyani Dyal Singh Ji and Bhai Taba Ji. The compositions they so painstakingly documented and preserved, have a quality that is impossible to describe in words. You have to learn them, sing them or hear them to understand what I am talking about ! I get goose bumps just thinking about some of the beautiful Kirtan that is alive today, only because of these books. At this very moment, I am grappling with a glorious Partal in Basant Bahar that I am trying to teach to a couple of my students.

To all of you Kirtaniyas out there: seek out these books ! Learn Pandit Bhatkhande’s system of notation. Start working on some of these fabulous melodies that link us to the pristine Kirtan that our Gurus gave us. Enjoy them and ask Waheguru to bless all of these wonderful souls that have contributed to the preservation of our heritage !

My friend, Sardar Amardeep Singh, currently from Singapore, a Kirtaniya and a Gurmat Sangeet Premi was kind enough to end me this comprehensive list of Books on Gurmat Sangeet. Enjoy ………

Whoever bumped this thread was reading my mind. I want to start a thread on Classical styles of performance. I have bookmarked a lot of things. And have joined the yahoo group on Gurmat Sangeet just to be on top of the scheduled performances around the world.

The story of classical instruments and the style of classical raag is not like anything else a person will hear.

Since the thread is in play now then I will start posting to this thread. And believe me Bhai Surinder Singh ji will be happy to see this kind of support.

We have opened a complete section here --> http://www.sikhphilosophy.net/gurmat-sangeet/ dedicated to Gurmat Sangeet. This section will host complete raaga based works of Ustaads, who have devoted their lives for the perseverance of this rare sikh art. Member can also post their links to video devoted to Gurmat Sangeet. Enjoy!!

That sound wonderful, Aman ji. This was such good stuff to start the day with. Really good.
P

aad0002 said:
That sound wonderful, Aman ji. This was such good stuff to start the day with. Really good.
Click to expand...

aad0002 Ji,
If you like classical music( I hope you do), please go on gurmatsangeetnetwork and listen to Usdaad Ranbir Singh ji's Raag Aasa Kafi, it is so soothing ! I wish I had Bose speakers to my laptop.:happy:

I do like the classical raag very much. I have all the rajacademy cd's published so far. Ustad Ranbir is magnificent. Did you know that Gurmat Sangeet has a yahoo group? What I will do next is post the Ustad Ranbir videos on You Tube in a few minutes.

As previous, individual words provided, please feel free to correct. My interpretation underneath in blue. Please add in your own understanding and how this shabad influences your life...