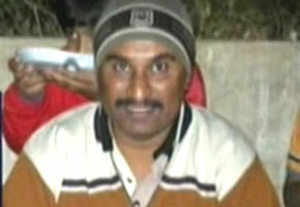 
AHMEDABAD: An environmental activist, Amit Jethava, was shot dead outside the Gujarat High Court on Tuesday night. The incident took place at 8.45pm when Jethava, who had come out of the bar council’s office in Satyamev complex — situated opposite the High Court — was getting into his car. According to the Sola police station officials, the assailants had come on a bike and shot him with a crude revolver.

"Two assailants, each armed with a country-made revolver, were waiting next to Jethava’s car," said a police official who is investigating the case. "One of them shot him in the back. Eyewitnesses say Jethava turned back and lunged at the bikers. A scuffle ensued and the duo fled the spot on foot, leaving their motorbike and dropping one of the revolvers. The bike’s number is fake."

Sniffer dogs were put to work and the trail led towards Jethava’s house at Vishwas City in Ghatlodia. On the way, cops found two 12-bore cartridges and a slipper.

Jethava was a former government employee who had been suspended for some irregularities. He turned into a wildlife activist based in Dhari, and established the Gir Nature Club. Eventually, he ventured into other areas of environmental activism and used the Right to Information (RTI) Act to dig out information about wrongdoings committed by industries and officials. Critics have pointed out that he was dubious in his dealings and often used to blackmail certain industries and officers.

Till about 2005, Jethava used to travel from Dhari to Ahmedabad in a bus to meet his lawyers through whom he used to fight several environment-related cases. However, in recent times, he had purchased an office and residential apartment in Ahmedabad and used to travel in his personal vehicle.

According to the police, Jethava, a native of Khamba in Amreli district, had recently locked horns with people indulging in illegal limestone mining in Kodinar.

"Jethava was dead soon after the incident. We have set up checkpoints to look for the suspects and block exits," said HM Kundaliya, an inspector of the Sola police station.

We strongly condemn the bruthal murder of RTI Activist Mr. AMIT JETHAVA, who was shout dead in Ahmedabad, last night.
This is a clear indication that the vested interests of bureaucrats and politicians had been suffering with the working of Mr. Jethava.
Friends this is high time that we should come out in large numbers and protest the rot that is overpowering the RTI Activists. We should make protests by signing the petitions.

Now I begin to worry about some other individuals I have contact with in India who are in the same boat. This is very sad, and beyond that, it is heart-breaking. Please convey condolences to all who loved this person.
R

'BJP MP behind whistleblower's murder'
AGENCIES, Jul 21, 2010, 01.07pm IST
AHMEDABAD: A day after RTI activist Amit Jethwa was shot dead outside the
Gujarat High Court in Ahmedabad after filing a recent PIL against illegal
mining, the family of Amit Jethwa alleged that a BJP MP was behind his murder.
Jethwa's family on Wednesday alleged foul play saying that BJP MP from Junagadh
-- Dinu Solanki was behind the murder.

Bhiku Jethwa, Amit's father said, "I strongly suspect that Dinu Solanki is
behind my son's murder. Because he has threatened me on telephone. He also
threatened Amit many times. Amit was threatened in Kodinar and Khamba towns in
front of large crowds, a thousand strong. But nobody dared to report the
matter."

Amit Jethwa was killed by 2 unidentified assailants on a motorcycle as he was
coming out of the court. Police say the assailants ran away from the spot after
shooting Jethwa.

He had recently filed a PIL in the Gujarat High Court against illegal mining in
Gir forest. Following his PIL, the authorities had cracked down on the illegal
mining activities in Gir forest and other areas on the Saurashtra coast.

TRIBUTE TO MR. JETWA​
One man army: Really Mr. Amit Jetwa was one man army.
He had shown the Power of a single person:

It is really amazing that a Director (Class-I), Forest and Environment Deparment (Equivalent to rank of Additional Secretary of Govt. of Gujrat was promoted through bluntant violation of rules of promotion in the year 2003 on adhoc basis and he continued on this sensitive post till 15th June 2010.

I salute to Mr. Amit B. Jetwa of Khambha village and President of Gir Nature Youth Club (Envioronment NGO) who could not tolerate that highhandedness that an officer not eligible for such an important post relating to environment protection should continue to it. At this subject he filed the RTI before the Govt of Gujrat and Gujrat Public Service Commission and collected all the relevant documents and informations regarding his promotion. On the basis of documents he persuaded State Govt. and pressurized the Govt to post and eligible and competent person for protection of environment. As per his observation he provided facts that the entire belt consisting of Baroda, Ankaleshwar, Vapi is engulfed with dangerous chemical pollution and its disaster would be 100 times worst than that of Bhopal.

As we know all the Governments in India don’t understand the language other than higher judiciary, Mr. Jetwa filed petition No. SCA No. 3939 of 2009 under article 226 for quo-warranto writ in Hon’ble High Court of Gujrat in June 2009. Due to his efforts On 15-06-2010 Hon’ble High Court issued writ and ordered State Govt to remove that officer from the post as his promotion was illegal and against rules. Application by concerned officer to stay operation of this order to enable him to appeal in higher court was also declined by the Hon.ble Court.

Mr. Jetwa was instrumental in posting of two additional information commissioners in Mar 2010 at Gujarat Information Commission through writ in High Court. Due to his efforts the State Govt has been compelled to include postal order as mode of payment for RTI fees in March 2010 through a writ petition. He had also filed writ for posting of Lokayukta in Gujarat as post is vacant since 2004. He used to collect information and papers through RTI Act, 2005 and on the basis of the collected information he used to file writs on it.

He did what one man can do with RTI .