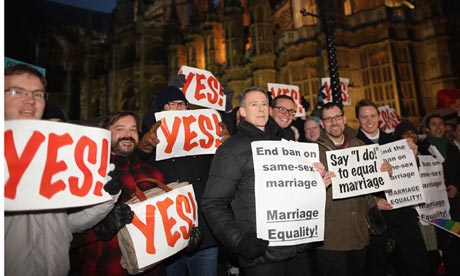 
When the moment came, it was joyous and loud. There were deafening cheers as the gay marriage bill passed its first parliamentary hurdle in the House of Commons last night from supporters squeezed into a committee room anxiously waiting the result. "As a boy I never thought this moment would happen in my lifetime," said Greg Leonard, 44. "It's really quite emotional". Asked if he was married, he grabbed his partner's leg. "Not yet," he said.

Supporters of the bill had gathered outside parliament as MPs were casting their votes. Archie Young, a 20-year-old actor, was among those who cheered as a lorry driver parped his horn and gave a big thumbs-up to the crowd. "This bill will go down in history as an actual groovy piece of legislation," he said. "It is up there with civil rights and the legalisation of homosexuality. This will be the moment when gay people can get married to each other and be recognised by the state - that's pretty fantastic."

The bill was of "huge symbolic importance," said Peter Tatchell, the gay rights campaigner: "This bill is a validation of love between people of the same sex, denying us the right to get married is an insult to those many lesbian and gay couples in long term relationships who simply want the same rights as everyone else."

He added that the fight to enable heterosexual couples to enter into civil partnerships would continue. "Instead of this half-baked measure, the government should legalise both same-sex marriage and opposite-sex civil partnerships and we will continue to push for total and full equality."

S Chelvan, a gay rights campaigner and barrister, called the vote a landmark moment in the battle for equal rights. "Separate but equal is not good enough," he said. "Gay people are identified as being different and not worthy of this institution — and it is that distancing that fuels discrimination of lesbian and gay people even in 2013." He added that he felt sorry for those opposing the bill. "The tide of history is going against them, and for them it will be a dark day."

Speaking as the debate was going on earlier in the day, Paul Spinks, the manager of a day nursery, explained that he and his partner were waiting until the gay marriage law was passed to commit to one another legally. "For me marriage represents commitment, trust and security," he said. "I grew up thinking I would get married and have children and that didn't change just because I fell in love with a man," he said. "For me, this is the government saying they don't value my love less than any other — that's a massive thing."

Shaz Riley, director of the Butch Clothing Company in Tunbridge Wells, who has considered herself married since her civil partnership, praised Cameron's decision to push forward with the bill despite opposition in his own party. "Tony Blair took civil partnerships as far as he could go and that was fantastic," she said. "But we always hoped the law would eventually change to include marriage, even if we didn't think it would be a Tory government that did it."

The bill was also supported by straight couples unwilling to endorse the institution of marriage while gay people were not allowed to get married. "I wouldn't support any institution that was discriminatory," said Weldon Kennedy, manager at a technology company. "Would I use public transport if gay people weren't allowed on the tube? No — for me it's the same with marriage."

In some places away from the halls of Westminster, reaction was more muted. Ben Page, chief executive of Ipsos Mori, explained "most people are in favour of gay marriage, but this is not seen as a key issue facing Britain," a sentiment echoed by Keith Flood, who entered into a civil partnership with his partner of 40 years when legislation was introduced in 2005. "I wouldn't want to get married, civil partnership encompasses everything I want," he said, adding that it remained a positive move. "Legality has meant so much and changed so many attitudes," he said. "Gay marriage would have been unthinkable 40 years ago — we've come a long way, we're almost civilised."


Religious institutions who do not want to conduct the ceremonies will be protected
http://www.guardian.co.uk/society/2013/jan/25/gay-marriage-bill-to-be-published


I think this is fantastic!! It is a positive step towards promoting committed relationships across society