Sikh From Being Bullied In Dunwoody To Honored In New York

Considering his role in bringing policy change to more than 100,000 DeKalb County students, his experience with bullying, his religious and cultural affiliation, his portrait being featured in an upcoming New York art gallery, and his willingness to stay positive, it’s safe to say Japjee Singh, 17, is not your average Dunwoody High School senior. 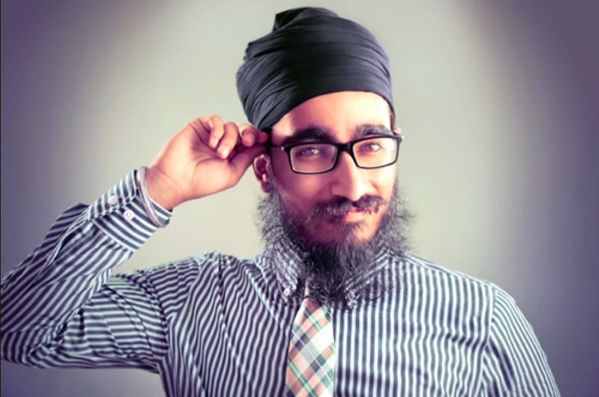 Singh follows Sikhism, a religion founded in the Punjab region of Asia more than 500 years ago. Today, Punjab covers parts of eastern Pakistan and northern India. Sikhs—someone who practices Sikhism—have played major roles in American history since arriving on the United States shores in the early 1900s.

While Sikhism’s founding principles seem to be easy to relate to—meditation on God (prayer), earning an honest living (truth), and sharing with others (kindness)—Sikhs have faced discrimination due to the color of their skin and type of dress, as Singh’s story attests.

“Everyone’s middle school is crazy,” Singh said. “It’s full of drama. Things are changing. People are changing. Everything is overdramatic. But in eighth grade, for me, it escalated.”

As a Sikh, Singh wears a turban. Before that, he tied his hair into a top bun. According to Singh, these are signs of both religious pride and generosity.

“All religions talk about hard work, selflessness and honesty,” Singh said. “We just display it publicly and we’re proud to do it. The Sikh identity is to dress for success. You shine your turban and beard out and we can always tell if someone does not tie it neatly.”

In October 2012, his eighth grade year, Singh’s turban caused him to be the victim of bullying. A student repeatedly berated him in front of class. He did not stop throughout the day. After lunch, the same student was waiting for him in front of his next class and a confrontation was the ultimate result.

“This particular day, he happened to come right in front of me and slap me in the face,” Singh said. “I’m remembering the ridicule and then he slapped me. But the way you react is what fuels the next minutes. I just stood there. Little did I know, it made him more aggressive and was escalating it further. Before I knew it, a group surrounded me and I was being pushed back and forth. Eventually he got tired of it, snapped, tackled me into the class, and hit me.”

Singh was immediately knocked out. His aggressor hit him several times before getting up and leaving as if nothing happened.

Singh sustained broken bones and bruises on his chest, face and torso. He was forced to miss approximately 40 days of school and go through two surgeries. Before that, however, he was suspended for being the aggressor and forced to sit through questioning.

“My dad’s first thought was, ‘Why haven’t you sent for the ambulance yet?’” Singh said. “They did not react to the policy the way they were supposed to.”

While the aggressor was suspended for five days, DeKalb’s student code of conduct suggests more action should have been taken. The minimum punishment for battery, which states “students will not cause substantial or visible bodily harm such as substantially blackened eyes, substantially swollen lips or other facial or bodily parts,” calls for a mandatory 10-day suspension with a contract.

Singh’s family balked at that point. He said, as immigrants, his parents were not used to authority figures telling them they could face legal action. In the same way, Singh said Peachtree Middle school officials seemed to rally behind the aggressor rather than the victim.

“It still hurts my mom to think of him sitting in the hallway bloody while students walk by and tell him to go back to his country,” said Aasees Kaur, Singh’s sister. “My mom heard all of this and it has left a lasting impact. You’re seeing your baby on the ground with a bloody face but also hearing other kids saying he deserved what he got. It was all so shocking.”

Upon his return to school, Singh said he faced more negative attention. Students told Singh they had guns and knives and hinted that he would be harmed with a weapon. Students also cut his hair with a pair of scissors longer than 10-inches, which is considered a weapon.

According to DeKalb’s student code of conduct, possession of a weapon—let alone threatening with a weapon—is grounds for a “long-term” suspension with a due process hearing.

Singh’s treatment eventually caught the eye of the Sikh Coalition, a human rights advocacy group for members of the Sikh faith. Together, they reached the U.S. Department of Justice (DOJ) and forced DeKalb County School District to change its conduct policies. The government found that DCSD’s bullying policies were not up to date.

“Our legal team filed a complaint with the DOJ, and two legal settlements were reached in 2013 and 2014, protecting 100,000 students in the DeKalb County School District,” stated the Sikh Coalition.

Singh’s bullying cases are the first DOJ school settlement on behalf of a Sikh student. The only requirement of both settlements was to implement policies protecting all students throughout the day and on school buses.

Singh and his family said the harassment was there long before the assault took place. He said these were the same kids he went to Kingsley Elementary school with who, after 9/11, asked him if he was hiding a bomb on his head. Kaur said she received similar treatment for having long hair and brown skin.

“With all this divisive rhetoric going around, we forget kids see the news, watch the news and that it affects them big time,” Singh said. “It affects everywhere, including service and police departments because [someone may wear] a turban or other headwear. If we bar people from service because of their religion, what kind of people are we?”

“If we’re not teaching compassion at home or to at least be respectful, it’s more than a lack of education,” Kaur said. “There’s an entitlement there. There’s something more.”

Singh’s high school years have been different. He has a diverse group of friends. He’s worked with the Anti-Defamation League, Office of Women’s Rights, Department of Education and Department of Justice. He’s involved with multiple school organizations, including Peer Leaders which matches older children with younger children for mentoring.

Singh said his experiences have shaped his awareness and involvement. He has gone on to speak and advocate for Sikhs and other minorities around the country. This September, he will take part in the first-ever Sikh portrait gallery in New York City.

While many Sikhs have faced discrimination since arriving in America more than 100 years ago, more than 500,000 Sikhs live in the United States and are considered part of the American fabric. They have their own history as one of the main groups of people who built the U.S. railroads.

“There’s no Sikh family who won’t tell you stories about discrimination and backlash,” Singh said. “But the point of the gallery is to show you we’re people. We’re your colleagues, doctors, lawyers, classmates, police officers. It’s to show we’re just as American as everyone else.”

For more information on the New York gallery featuring Japjee Singh and others, visit www.sikhcoalition.org.