Gurdwara panels in US, Pakistan to stick to original Nanakshahi Calendar

The SGPC move to come out with Sikh New Year calendar having “Bikrami character” has not found favour with Sikh organisations in various countries. These organisations have rejected the new calendar and SGPC’s efforts to decide on global Panthic matters.

Talking to The Tribune on the phone from the USA, American Gurdwara Parbandhak Committee (AGPC) coordinator Dr Pritpal Singh said, “We reject the committee constituted by the Sikh clergy to resolve the calendar row and the calendar released by the SGPC.”

He said the AGPC had been following the original Nanakshahi calendar since 2003 and would continue to do so in future. He said their apprehensions regarding the revival of Bikrami calendar have come true with the fresh SGPC move. He urged the Akal Takht Jathedar not to play with Sikh sentiments.

The Pakistan Sikh Gurdwara Parbandhak Committee (PSGPC) also stated that it would stick to the original Nanakshahi calendar. PSGPC general secretary Gopal Singh Chawla, said, “The PSGPC led by its president Sham Singh released the original Nanakshahi calendar for the New Year on Saturday.” He said they would continue to follow it in future as it symbolised the distinct identity of Sikhs. 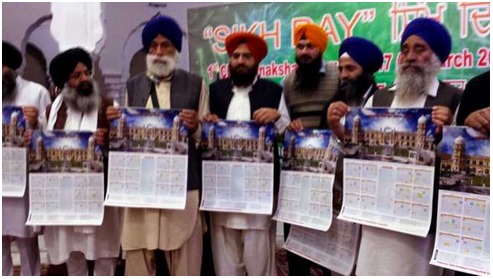 Members of the Pakistan Sikh Gurdwara Parbandhak Committee release the original Nanakshahi calendar for the Sikh New Year in Pakistan. A Tribune photograph

Gulbarg Singh of the Global Sikh Council (GSC) also rejected efforts by “any local organisation, especially the one under the control of a politician, to decide on global Panthic matters”. “Therefore, any decision, made by any committee, formed by the SGPC by exploiting the name of Akal Takht, to sabotage Nanakshahi calendar, the symbol of Khalsa Panth’s sovereignty, will not be acceptable,” he said.

Referring to the Sikh Gurdwara Act, he said the SGPC’s responsibility and authority was limited to the management of historic Sikh shrines in Punjab and others under its control. “Under the Act, no jathedar of any shrine, including Akal Takht, has been assigned any authority to act as a spokesperson for the Sarbat Khalsa, the Khalsa Panth.” He felt it was high time for the Sarbat Khalsa to become active and discharge its duties independent of any outside influences, political or otherwise.

The National Sikh Council of Australia Inc, which is a member of the GSC, also said the SGPC’s authority was limited to Punjab and Haryana only and not all Sikhs in the world. The council said, “The SGPC represents gurdwaras in Punjab and Haryana only, but most of the simple-minded diaspora Sikhs are under the impression that the SGPC is the controlling body of all Sikhs in the world, which is not true. The GSC should not follow the SGPC, rather the SGPC should follow the GSC,” it stated in a letter written to Gulbarg Singh of the GSC.

We (the Pakistan Sikh Gurdwara Parbandhak Committee) will continue to follow the original Nanakshahi calendar in future as it symbolises the distinct identity of Sikhs. — Gopal Singh Chawla, PSGPC gen secy

We (the American Gurdwara Parbandhak Committee) reject the committee constituted by the Sikh clergy to resolve the calendar row and calendar released by the SGPC. — Dr Pritpal Singh, AGPC coordinator

Any decision made by any committee formed by the SGPC by exploiting the name of Akal Takht to conspire to sabotage Nanakshahi calendar will not be acceptable. — Gulbarg Singh, Global Sikh Council

Talking to The Tribune on the phone from Canada, Purewal said, “I came to know about it through media reports on the Internet. It is unfortunate. They’ve made a mockery of the Sikh calendar. The calendar they released yesterday is the third one in the past 12 years. They are set to come out with a new calendar next year.”

He said with the SGPC almost reverting to Bikrami calendar for the New Year, the committee constituted by the Sikh clergy to resolve the calendar row has lost its relevance. “It is tantamount to giving an indication to the committee as to on what lines it is supposed to work,” he said.

Purewal also hinted that he might not be part of the committee constituted recently by the Sikh clergy to resolve the calendar row. He said, “I have not received any official communication from the Akal Takht. I have only read media reports about my inclusion in the committee.”
S

Sikh history follows Bikarmi calendar. Original bikarmi calendar is correct. it also has 365 day in the year. only difference is that sikhs in foreign countries do not know bikarmi calendar. Some try and follow hindu and muslim calendar which is lunar calendar, that makes each month 30 day, because of that our dates for different functions change. they are also hypnotized by western calendar. that is the main reason. It is not the duty of sgpc to apprise us to learn about bikarmi calendar. We have to learn it on our own rather than complaining and rejecting it.
K

The whole furore was totally unwarranted in my opinion.The Sikh community has functioned as a distinct community for the last 500 years and having such a calendar has done nothing to expand or strengthen that identity, but has only expanded and strengthened the polarisation between Sikhs. Since day 1 it has done this. The harm it has caused will never be matched by the meagre benefits of "identity" it purports to create.
Share:
Facebook Twitter Reddit Pinterest Tumblr WhatsApp Email Share Link