(CNN)The Indian-American actor and designer Waris Ahluwalia, whose plane ticket was canceled because he refused to remove his turban, accepted an apology from Aeromexico. But he is not planning on leaving Mexico City until further steps are taken. 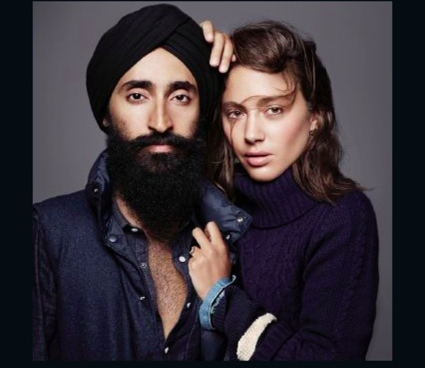 Ahluwalia was departing Mexico City this week, but the country's largest airline wouldn't let him board a flight home.

Ahluwalia, who is Sikh, said Aeromexico staff and security screeners told him Monday to buy a ticket on a different airline after he refused to remove the turban he wears as part of his faith.

Aeromexico offered an apology Tuesday, saying it "recognizes and is proud of the diversity of its passengers."

"We apologize to Mr. Waris Ahluwalia for the bad experience he went through with one of our security personnel," Aeromexico said in a statement.

The airline said it works to maintain strong security measures while respecting its passengers' cultures and beliefs.

But Ahluwalia said those who wear turbans shouldn't face discrimination. Travelers should be taken into a private area if they're asked to remove their turban, he said, as required by the policy of the U.S. Transportation Security Administration.

Aeromexico's apology "is a brilliant first step" but "there is a lack of understanding," Ahluwalia told CNN's Christiane Amanpour on Tuesday.

He thanked the airline for its apology, but called the gesture "past-looking" and that he wants to talk about "steps in the future."

Aeromexico has offered to board Ahluwalia on other flights, but he so far has refused.

"The reason I am here [in Mexico] on my own will is that I'm afraid [that] if I leave this can happen again to someone else," he said. "And I can't in good conscience allow that."

The actor said he will remain in Mexico until there can be a dialogue with Aeromexico bosses about training their staff.

"Really, this is about education, about education of the Sikh religion, but also of other religions, and this is not just about me or Sikhs," he said.

Upset, anxious, shaking
Ahluwalia was in Mexico City for a contemporary art show. The incident happened as he prepared to fly to New York.

"I was upset, I had anxiety, I was shaking, I did not speak," Ahluwalia told CNN. "And then I realized, clearly, they have not been trained properly. I knew yelling will not do anything. It is about education and the policy."

And so, days after he posted about fresh papayas and famed artist Frida Kahlo, Ahluwalia started sharing photos about his security screening.

Ahluwalia -- whose acting career has included roles in "The Grand Budapest Hotel," "The Darjeeling Limited" and "Inside Man" -- drew attention to his plight on social media, posting a photo of what he said was his canceled plane ticket.

The Sikh turban: At once personal and extremely public

Sikh men have worn turbans since 1699 when the last living guru bestowed a unique Sikh identity based on five articles of faith. Among them were a steel bracelet signifying a reality with no beginning or end, a sword representing resolve and justice, and unshorn hair as a gift of God and a declaration of humility.

Some Sikh men don't wear turbans and beards; others say they stopped after being mistaken for Muslims and being targeted after 9/11.

Losing the Turban: Indian Sikhs at odds on essentials

'We have to be vigilant'
Ahluwalia said he has had brushes with bigotry before. In 2013, a Gap holiday ad with him drew widespread attention after someone defaced it in a New York subway station.

"Make Love" was crossed out to read "Make Bombs." Beneath that, someone scrawled, "Please stop driving TAXIS."

The company was quick to replace the ad and double down on its campaign, making the photo its background image on Twitter and Facebook and releasing a statement saying Gap "is a brand that celebrates inclusion and diversity."

A 2013 Gap ad with Ahluwalia was defaced at a New York subway station.
That "was a great example for corporate responsibility," Ahluwalia said, "but this is the exact opposite of that."

"I didn't ask to be a public face or voice of a religion. Sikhs have been in (the United States) for over 125 years," he said. "I just want to make and create art."

But Ahluwalia said he knew he needed to take a stand.

"I'm not sitting here angry at Aeromexico. Everyone makes mistakes. I've made mistakes," he said. "But what makes us different is how we collect and respond and react to the mistakes we make. They did not know. I cannot blame them for that, but ignorance and fear is the flag humans carry, and we have to be vigilant to fight that."

CNN's Mariano Castillo and Moni Basu contributed to this report.

I cannot believe that in the second decade of the 21st century we Sikhs are still having to deal with this sort of thing. education and training please particularly the mainstream media though it would help if the UK/US geo-political/banker/military machine didnt have imperial plans on muslim owned resources