Senior advocate of Delhi High Court Harvinder Singh Phoolka, addressing a news conference here, Sunday has lamented the role of DSGMC for delaying it on one pretext to another.

When asked why the name of Kamal Nath was left out if he was involved the attack on Gurdwara Rakab Ganj he said that the locus to file case against him was with DSGMC as attack was made on Gurdwara managed by DSGMC. He said he has again requested DSGMC to file a case against him. He said that the first name on any politician involved in anti Sikh riots was cropped up was Kamal Nath as Indian Express on November 2, 1984 had reported that Kamal Nath led the mob which attacked the Gurdwara Rakab Ganj in which two persons were killed. He said that the reporter of Indian Express Sanjay Suri had appeared in Mishra Commission and gave the affidavit against Kamal Nath.

Asked about the Capt. Amarinder Singh’s clean chit to Kamal Nath and Jagdish Tytler he said that he has written a letter to him and yet to receive his reply on this issue.

Regarding the security of witnesses on anti Sikhs riots of 1984 he said that he will meet Punjab chief Minister Parkash Singh Badal to come forward a composite plan for rehabilitation and safety of them in Punjab. He said that it was the responsibility of centre government but security was the main concern.

Punjab Deputy Chief minister Sukhbir Singh Badal also expressed apprehensions about their physical safety of witnesses as they have been receiving threats especially since the case against Sajjan Kumar got momentum.

Phoolka informed that revision petition, against the decision of magistrate court in which it has accepted the closure report of CBI against Jagdish Tytler, has been filed in Karkardoma session court on Saturday and it will come up for hearing on June 1. He said that in the revision petition filled by Navkiran Singh and Kamna Vohra has raised the objections on CBI closure report that it has over sighted the conspiracy part of anti Sikh riots in which Jagdish Tytler was involved. He said that the presence of persons was not needed at the incident. It was more evident when he went to the office of Delhi police commissioner to got released his men involved in Delhi riots, he added. He said that the newspapers had published it next day. 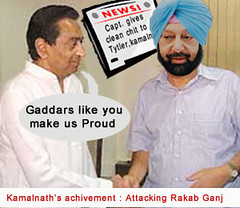