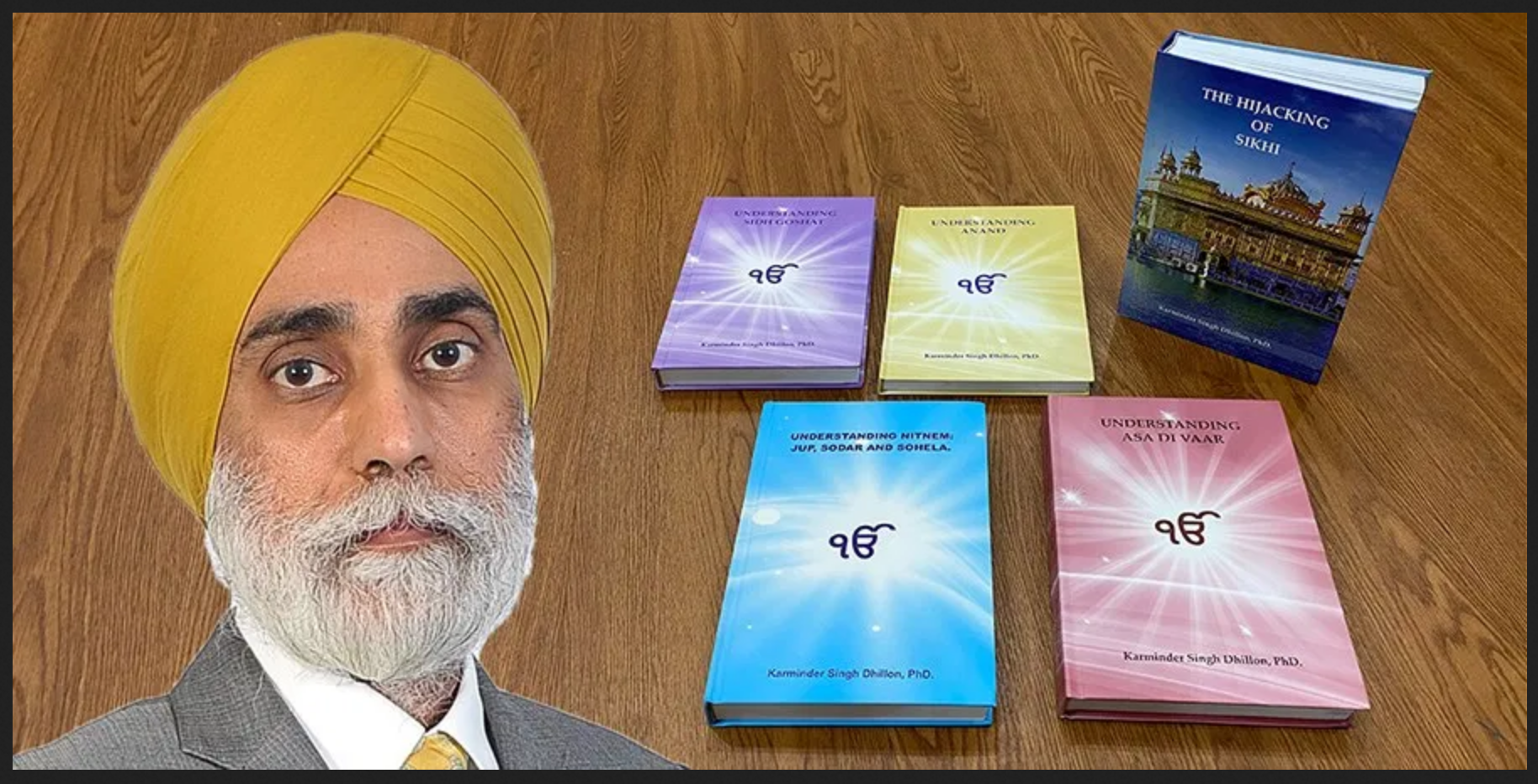 The Hijacking of Sikhi and four books on understanding various portions of the Sikh scripture -- totaling 1,450 pages -- are available at a low cost as they are sold at zero profit, with zero royalty payment to the author. They are a must have for any serious seeker of Sikhi.
By Asia Samachar Team | MALAYSIA |

Just months after retiring from the Malaysian civil service, Sikh thinker Dr Karminder Singh is hitting the Sikh learning route running with the release of five books at a go. The Hijacking of Sikhi and four books on understanding various portions of the Sikh scripture — totaling 1,450 pages — are available at a low cost as they are sold at zero profit, with zero royalty payment to the author. See FAQ.

The other four books are Understanding Sidh Goshat (271 pages), Understanding Anand (162), Understanding Asa Di Vaar (289) and Understanding Nitnem: Jup, Sodar and Sohela. (308). Why bother writing the books? The author believes that it would be an achievement if readers can come to appreciate the meaningful messages that our Gurus have composed within the pages of the Sri Guru Granth Sahib (SGGS).

“The idea that Gurbani contains messages that must be understood, accepted, believed, inculcated and applied in our daily lives needs to be embraced by us Sikhs. This is the real deal,” he told Asia Samachar in an email interview.

“The core theme of my books is that Sikhi is a Spirituality of the Self, By The Self, For the Self. Guru Nanak put it this way: Apan Hathi Apna, Apey Hi Kaaj Swareay. If readers can appreciate and embrace this principle in their spiritual journeys, I would have achieved the purpose of it all.” READ FULL INTERVIEW HERE.

And he writes well! The two-page preface in the Understanding Asa Di Vaar, for example, illustrates his ability to distill the essence of the topic at hand. There is much to digest in the less than 450-word piece. And so much more awaits as you deep dive into this book, and the others.

The four books on understanding portions of SGGS are primarily Gurbani translations and interpretations of the respective banis.

Each word within the verse is given its literal meaning and where applicable its metaphoric, idiomatic or spiritual meaning. The entire verse is then translated with a view towards deriving its spiritual message. Notes are provided to explain why the commonly accepted translations of particular verses are in error, according to a brief available here.

On the 420-page The Hijacking of Sikhi, the note states that it is based on the premise that Sikhi as it is practiced today, is no longer the Sikhi that was taught to us by our Gurus.

It is a spirituality that stands distorted, corrupted and tainted. The messages of its scripture – Gurbani – have been distorted through vedic, yogic and puranic slants in interpretations and translations; its history muddled in unbelievable tales of miracles called sakhis, it’s general conduct dictated by an institutionalized clergy – a group that was soundly critiqued by our Gurus, and its religious practices have come to consist of those smuggled in from rejected and discarded rituals of pre-1469 practices.

It’s a faith that has been hijacked from its unique path and equally distinct goals. It is a Godly spirituality that has been corrupted into a clergy concocted and clergy dominated religious dogma. This book tells the story of how, when and why this happened; and the narrative of brave souls who have tried to correct the wrongs, it added.

Hence, Dr Karminder told Asia Samachar that a large majority of Sikhs have outsourced their spirituality to the clergy.

“Guru Nanak held the clergy of his day responsible for the destruction of spirituality then. He cautioned us against having a clergy class. We have defied his call and have ended up with a clergy that is anti-thesis to Sikhi. Sikhi is now within the control and domain of our clergy. My books are aimed at putting Sikhi back into the hands of Sikhs themselves,” he said.

Karminder, whose father was a granthi and a Sikh intellectual, is also a well-known Sikh writer and speaker who never shies away from tackling difficult and controversial topics.

Karminder is currently the joint editor of US-based The Sikh Bulletin and sits on the board of the Sikhi Vichar Forum website which aims to create awareness on ‘authentic SGGS based Sikhi’. Asia Samachar has published many of his article in the past.

Without doubt, these five books are a must have for any serious seeker of Sikhi.