Literature Does Language Impact The Transmission Of Wisdom From The Sri Guru Granth Sahib?

The light of the Sri Guru Granth Sahib (SGGS) is sought by over 300 million spiritual seekers worldwide. With this rapidly expanding urge and need, there is a concern that haunts us. It is about providing easy access to the Guru’s wisdom to a rapidly evolving global village.

Many linguists and educational researchers have established that the language of a culture, or mother tongue of an individual, is essential to impart any ideology or educational material.

It does not matter, whether this audience is of Indian origin or others. It will not serve its purpose unless the knowledge is imparted in a local language – the language people learn from their surroundings, and not have to go to a Gurdwara school to learn it.

There is a difference between information and knowledge. Information can be easily translated and transmitted in any language and is stored as well as propagated in any language. Knowledge, on the other hand, cannot be imparted effectively in a language other than the mother tongue.

Mother tongue is a language, which is acquired without requiring formal instructions in a school or from a tutor. It is learned from continued communication with the family members living at home, particularly the mother. We are losing Punjabi as the mother tongue day by day even in the areas where it has dominated for centuries. Further, Punjabi is not the mother tongue of the most of the world.

The Guru Granth In The Future World

The children of the future world would not know the relevance of the SGGS in their life unless they learn it through language, which can effectively impart the required knowledge to them. And, that the knowledge is imparted in the newly acquired mother tongues of their parents and siblings.

At present, English is the most spoken language and the language of 75% printed material in the world.

If you do not believe me, then tell me how many of you can understand the advantage of Macintosh over Windows in any language other than in English. Why are all technologists even in Hindi speaking India, Urdu speaking Pakistan, or Hebrew speaking Israel making all software in English, why not in Hindi, Punjabi, or Hebrew? You know the answer.

We Sikhs take a lot of pride in the universality of the message of the Gurus meaning that our Guru revealed their message for the benefit of all peoples and all communities. Our clerics and our leaders miss no opportunity to emphasize this distinction of our Guru’s message. Similarly, we speak of our Gurdwaras and other congregational institutions open to everyone in the global village.

But we fail to realize that by trussing Sikh beliefs and practices far too tightly with Punjabi language, ethnicity, and lifestyle, we commit the sin of utterly refusing to share our religion with the rest of the world.

Failing to share our heritage with others is far too evident in our religious practices. Traditionally we limit our congregational services and prayers only to the language of our ancestors, and in doing so we virtually close doors to others. We even make it harder for our life partners to connect to our faith if they happened to be born outside Punjab.

Similarly, we disfranchise even our children and the young Sikhs growing up in the West from having full access to the Guru’s teachings.

It is not difficult to see a parallel with the days of racial discrimination in America. When the white population wanted to disfranchise a black people from their birthright to vote, they used the hurdle of literacy in a language that the black community had difficulty to be proficient in.

Strict adherence to any one language of a predominant religion was not the case at the time of our Gurus. Guru Nanak and his successors traveled to all reachable lands to spread the Word; they unreservedly used whatever language would get their message across. They defied tradition set by Brahmins and Mullahs, who insisted on Sanskrit and Arabic to teach theology; in contrast, the gurus used the spoken language of the people as a medium of their mission. I do not recall reading anywhere that when Guru Nanak visited many lands that he ever required his audience to learn Punjabi or he taught Punjabi to anyone.

Guru Amar Das rebuked a delegation of religious scholars who came to persuade him to use the language of the religious elite, Sanskrit, to impart his message. 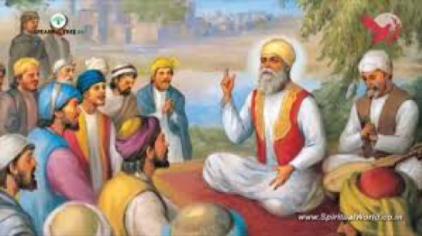 According to Bhai Santokh Singh [4], Guru Amar Das told the visitors a metaphor to make his point. He said, “God’s theology is like water to a thirsty person. Divine knowledge in Sanskrit or Arabic is like water in a deep well; it takes the effort to draw it and then irrigate crops of only those who own the land and the means. Guru’s teachings must be in a language that serves like a cloudburst which turns the crops of everyone and in every field green; it reaches mountains and valleys alike, birds and mammals alike, animals and human alike, poor and rich alike.” (English translation from original Punjabi by the author.)

Guru Amar Das’s response was like a famous biblical parabola where Jesus said that when you light a lamp; place it on a higher pedestal so that the light can reach everyone. Requiring especially made colored glasses to see the light will contradict the essence of this parabola.

There are some Punjabi compositions in the SGGS, but mostly they are written in many other languages of India as well as Middle Eastern and South Eastern countries. There are over 22 languages used to compose the hymns in the Guru Granth [3].

Guru Gobind Singh mostly used Braj Bhasha (the language of Bihar), Persian and Arabic, but not any Punjabi in his compositions or in his daily teaching. The Sikh rulers similarly used Persian to conduct their day-to-day business. Maharaja Ranjit Singh, only two centuries ago, used Persian and so did Banda Bahadur, a contemporary of Guru Gobind Singh. He issued coins of the Sikh kingdom with Persian inscriptions. 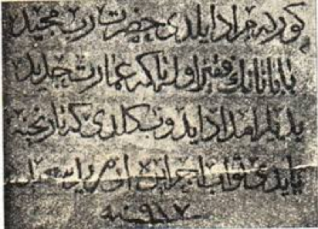 The language of the SGGS, the Eternal Guru of the Sikhs, is so different from modern Punjabi that most Punjabi speaking people of today do not understand much of it. I have difficulty myself in understanding the Punjabi text that is currently being used by Sikh scholars in India to explain the doctrines in the SGGS.

No wonder that their Punjabi books find only negligible circulation in North America or Europe. Even in India, they are not read as is evident from a meager number of prints that are made of books on Sikhism published in Punjabi.

History is a witness, that if the Gurus were here in North America today, they would depart from the past and use English to communicate. They would use a language in which more than three fourth of all the printed material is produced.

Today Most Communication Is In English

Most of the progressive elements in every religion now use English to communicate. The cyberspace technology as the medium of future communication began to require that we speak the cyberspace language or be eclipsed from the wired communities.

Our youth outside India exclusively use only English language to conduct their daily lives both at home and at work. It will be wise not to resist the trend for the propagation of our religion among this generation.

Erosion Of Sikh Identities is Warning

I personally visited many places in North American where Sikh identities were entirely wiped out of existence by the third or fourth generation. It was primarily because their immigrant parents would not convey their religious inheritance to their children in the language of their adopted country. That left only the rituals or ceremonies of their faith for the children to relate to and those lost their meaningless appeal within a generation. You may not have to go far to see this trend continuing even today.

In many old communities of North America today, the only thing children recall to a visitor is the memory of their grandparents being Sikhs, the term that they can often not even pronounce correctly. These children usually preserve, besides photographs, one or two of their parents’ “prayer books” as the museum pieces in their homes.

It breaks my heart when I visit homes of this generation. But all I can do is to show some love towards them and promise to relate their message to our first-generation Sikh community here.

Many of them do ask me if I can send them some Sikh literature in English.

I am pleased to see that Sikh congregations in Pakistan use Shahmukhi script and Urdu language to publish the Sikh literature. In Sind and North West Pakistan, over 3 million Sikhs who are popularly known as Nanak Panahi use Sindhi. The newly converted Caucasian Sikhs in North America use English and Spanish as a medium in their Gurdwaras. Their outfits in China and Brazil similalry speak of the Guru Granth teachings in their own languages.

Only a very tiny but gradually growing population of Sikh children of Punjabi parents in North America is getting bold enough to break from the tradition and improvise the religious liturgy in English. The efforts of the youth groups promoted by Charhdi Kala in Northern California is one example. There are sprouting several cybergroups in the West to impact the Guru Granth knowledge in English.

For the conclusion, I would like to quote Dr. Indermohan Singh of the Charhdi-Kala Foundation. He recently wrote, “There are very good reasons for Sikhs of Punjabi origin to want to preserve their language and culture. There is also no question that for those who can understand it, Gurbani in its original languages is much more beautiful and meaningful. It is tough to capture the beauty and poetry of the original in a translation. But I believe we should be very clear about the differences between the religious versus cultural and linguistic issues. And we should make an effort to share the Guru’s Word using every language and medium that is effective and available.” [2].

See discussions, stats, and author profiles for an earlier version of this publication at (PDF) FUTURE LANGUAGE FOR TRANSMISSION OF...