Tareq and Michaele Salahi, part of the cast of a reality show called "The Real Housewives of DC," crashed Tuesday's state dinner at the White House. Facebook photos of the couple posing with Vice President Joe Biden and Chief of Staff Rahm Emanuel indicate that the couple had up-close access to some of Washington's elite, without actually being on the guest list. 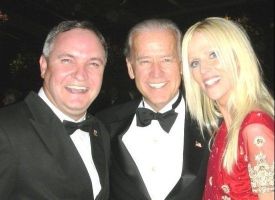 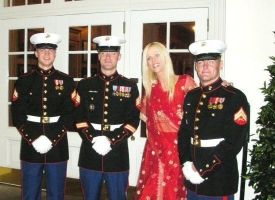 Roxanne Roberts, who first reported the story for the Washington Post, discussed the incident and the security implications on CNN:

More from the Associated Press:

WASHINGTON (AP) -- Crashing a state dinner at the White House apparently takes a security breakdown as well as some kind of nerve.
The Secret Service is looking into its own security procedures after determining that a Virginia couple, Michaele and Tareq Salahi, managed to slip into Tuesday night's state dinner at the White House even though they were not on the guest list, agency spokesman Ed Donovan said.

President Barack Obama was never in any danger because the party crashers went through the same security screening for weapons as the 300-plus people actually invited to the dinner honoring Indian Prime Minister Manmohan Singh, Donovan said.

Donovan confirmed the identities of the couple. The Washington Post, which first reported on their evening out, said the Salahis were well-known in the Virginia horse-country set.

The Secret Service learned about the security breach Wednesday after a media inquiry prompted by the Salahis' online boasts about having attended the private event, Donovan said.

One of the many photos from the dinner posted on Michaele Salahi's Facebook page shows the couple with a smiling Vice President Joe Biden. In other photos, they appear alone or together with White House chief of staff Rahm Emanuel, Washington Mayor Adrian Fenty, CBS News anchor Katie Couric, Rep. Ed Royce, R-Calif., and three Marines in their dress blues.

Donovan would not comment on whether the couple had been contacted by the Secret Service, how long they were on the White House grounds or other details of the investigation.

The agency's Office of Professional Responsibility was reviewing what occurred. An initial finding indicated that a checkpoint did not follow proper procedures to ensure the two were on the guest list, Donovan said.

"It's important to note that they went through all the security screenings - the magnetometer screening - just like all the other guests did," Donovan said. And, he added, Obama and others under Secret Service protection had their usual security details with them at the dinner.