SikhRI Connecting With The Divine Light


Recently, I participated in a workshop presented by the Sikh Research Institute (SikhRI).

This well-attended program, led by Harinder Singh, Gurpreet Kaur and Mandhir Singh, was held at the Stamford campus of the University of Connecticut. It was coordinated by Inni Kaur.

Established in 2003 and located in San Antonio, Texas, SikhRI is a nonprofit, faith-based initiative whose mission is to "facilitate training and development while inspiring Sikh values, create global awareness of Sikhi, and deliver solutions to the key challenges faced by the Sikh community".

Like all of SikhRI's "Mark of Excellence" seminars, the aim of this workshop was to foster Sikh values based on Gurmat traditions, through examination of Bani (scripture), Tavarikh (history), and Rahit (discipline and lifestyle). It was divided into four sessions.

Session I, "What is Guru?: Meaning, Role & Importance", involved exercises done on both an individual and group level. Participants offered brief personal answers to the cosmic questions of "What is Guru to me?" and "Why is Guru important to me?".

Then came activities that required pairing up and moving around the room in tandem (sometimes with eyes closed), designed to provoke reflection on the relative functions of leaders and followers.

This morphed into a discussion of the meaning of the word "Guru" in the Sikh context and the Guru's primordial role in transforming our thinking and behaviour.

Splitting up into three groups, we proceeded to analyze brief excerpts from Asa ki Var (in the original Gurbani, with English translations of selected words provided) that portray the Guru as a dispeller of ignorance and a sacred conduit of divine wisdom and guidance.

Session II, "The Prophet-Genius of Ten Nanaks: Attributes, Lives & Contributions", dealt with a key aspect of building a relationship with the Guru, examining historical elements of how each of the ten human Gurus lived and put their teachings into practice.

Throughout this session, the incomparable revolutionary spirit of Sikhi was shown as starting right from the very founding of the faith by Guru Nanak, with the Ten Masters being depicted as models of "total leadership". They were indeed peerless spiritual/religious preceptors, uplifting ordinary mortals by offering them a direct relationship with the Divine.

But their roles were not confined to this sphere alone.

They were also influential social and political activists, who integrally transformed their environment by empowering and freeing the common people through their utterly groundbreaking message of universal equality and the establishment of various centers of economic development, beginning with Kartarpur, in Punjab.

As the lives and times of the Gurus were examined one by one, it was fascinating to note the debunking of many commonly-held stereotypes (especially of the First and Tenth Master).

For instance, Guru Nanak was not only a pacifist traveler and farmer, but also a leader who fearlessly stood up to the might of the Moghul emperor, while Guru Gobind Singh, besides his militant image as a "warrior Guru", was also a highly accomplished and sensitive poet, and a patron of the arts.

Throughout this session, the core Sikh concept that all ten Gurus shared one jyot, or Divine Light, was stressed. Although they inhabited separate human bodies, they propounded a fully unified message of timeless wisdom, and used the same value system and effective methods to build lasting Sikh institutions.

Differences between the composition of the Sikh Qaum (nation) and Panth (those who declare allegiance to the Guru through the Amrit ceremony) were explored.

The concept of Khalsa was put forth not as one of exclusivity, but as a choice an individual makes. It is not simply a matter of looking like a Sikh in outward identity; a member of the Khalsa must also act like a Sikh, displaying behavior/lifestyle commensurate with Sikh ideals. A formal commitment of allegiance to the Guru, while essential, is not enough.
A Khalsa must "live in complete awareness, drenched in love".

As was the case with all three sessions that preceded it, Gurmat perspectives were presented by the facilitators in ways that resonated and connected with contemporary life in a relevant manner. A common thread surfaced repeatedly in the discussion of a variety of topics: Sikhi is not a dogmatic faith composed of rigid do's and don'ts. By the ways in which we choose to manifest our personal relationship with the Guru, we, too, can reflect the revolutionary freshness and original spark of Sikhi in our own lives.

I had previously heard quite a bit about SikhRI's "Mark of Excellence" programs and my expectations of this workshop were extremely high. They were not only met, but exceeded.

Every session unfolded in a most stimulating manner and the hours passed amazingly quickly. In order to maximize the available timeframe for discussion in Session I, the paired leader/follower activities could possibly be shortened in duration.

While thought-provoking and useful as an "icebreaker", curtailing these exercises would have the benefit of allowing more opportunity for in-depth exploration of the profound and fundamental questions about our Guru around which this part of the workshop revolved.

Both Keshadhari and non-Keshadhari Sikhs, as well as a surprisingly wide range of ages (from high-school student to retiree) were represented among the attendees. This substantially added to the warm and inclusive feeling of sangat that characterized this program.

The active involvement encouraged by the three facilitators, along with the remarkable extent to which everyone (regardless of their degree of personal observance or depth of knowledge about Sikhi) felt comfortable in participating and expressing their views, enabled the spirit of inquiry and passion for lifelong learning - both ideal hallmarks of our faith - to be present in abundance.

Just as vital and equally in ample evidence was an electrifying atmosphere thoroughly permeated with the deep love we all share for our Guru.

"The Guru: Connecting with the Divine Light" is not only a very valuable workshop per se, but an immensely motivational springboard to further reading, study and discussion. 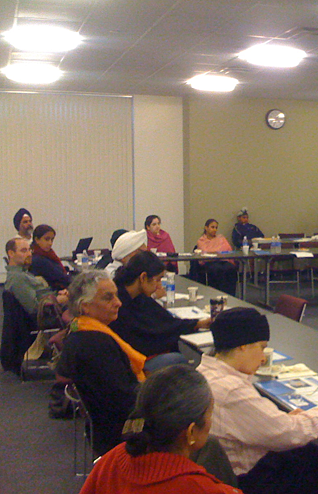