Comedian, satirist-cum-actor Jaspal Bhatti died in a road accident near Shahkot in Punjab on Thursday morning. Bhatti, 57, died after his car hit a trolley while he was travelling for a film promotion. He was on his way to Nakodar from Bhatinda.

Bhatti , a constant thorn in the flesh of self-serving politicians, greedy builders and oily middlemen, recently made news for venturing into setting up a 'factory' to manufacture foundation stones to cater to the "ever increasing" demand from ministers and politicians.

The comedian had put up a board titled Jaspal Bhatti' s National Foundation Stone Factory at a plot he owns in Mohali town of Punjab, adjoining Chandigarh. The 'factory' promises an all-weather supply of foundation stones to bigwigs for all occasions.

He was most well known for his television series Flop Show and mini capsules Ulta Pulta which ran on Doordarshan, India's national television network, in the late 1980s and early 1990s. 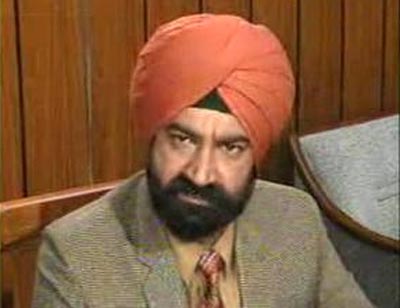 - in the flop show, source http://www.rediff.com/movies/slide-...greatest-characters-on-indian-tv/20120918.htm

Very sad news..Punjab has lost a diamond..a gem of a man...his latest film..POWER CUT is a parody on the EXCESS POWER Punjab has..His daughter Jaspreet was also with him but fortunately only injured...the herione of the Power Cut film also injured...
K

Gyani Jarnail Singh said:
Very sad news..Punjab has lost a diamond..a gem of a man...his latest film..POWER CUT is a parody on the EXCESS POWER Punjab has..His daughter Jaspreet was also with him but fortunately only injured...the herione of the Power Cut film also injured...
Click to expand...

It is his son Jasraj Bhatti that is injured not the daughter.He was launching his son in film power cut.What a sad day for family , just few days from release of film in which his son was making debut he dies untimely accidental death
P

Very sad news of the day.
A great loss for the family.
I send my deep felt condolence
to the family
May Hari ji give courage to family to
bear this untimely loss.

Bhatti Ji was more than comedian. Great sense of humor and liked satirist .
R.I.P. May god give patience to family to overcome this loss.

Yes Indeed...and his car hit a TAHLEE (tree) and not a Trolley !! Only a TREE can cause such serious injuries and death..the FRONT passenger and driver were saved by the Seat belt and BAGS...Jaspal Ji was a Back seat passenger...and suffered serious skull neck fractures...died on the way to hospital.
He will be dearly MISSED...First it was Kallian da Badshah..Kuldip mannak..then it was GHAZL KING..Jagjit Singh..and Now EMPEROR of SATIRE...Jaspall Singh Bhatee...great loss for Punjab and India...
Share:
Facebook Twitter Reddit Pinterest Tumblr WhatsApp Email Share Link