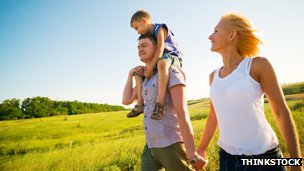 Children are being denied the enjoyment of the outdoors and nature with consequences for their health, the head of the National Trust has warned.

Dame Fiona Reynolds told the Times the freedom of children to roam unsupervised had shrunk massively since the 1970s.

She blamed nervousness and technology, adding that the creep of urban sprawl had destroyed safe places to play.

She called for children to be taught outside on a weekly basis.

'Very anxious'
Trust chief executive Dame Fiona said: "Children are missing out on the sheer joy and physical and mental well-being of being able to play outside and experience nature in all its messiness.

"It's partly technology and it's partly a sort of nervousness. The freedom for children to roam unsupervised has shrunk by 90% since the 1970s.

"The world is a different place and people have become very anxious about the risks - real or perceived."

She called on schools to take the initiative and to change the way they teach children.

"The world is changing. It is more recognised now that some of these more innovative ways of teaching are just as effective for literacy and numeracy as sitting in the classroom in a very structured way."

The trust, which has nearly four million members, believes the cloistered upbringing of children could be harmful.

Dame Fiona added that children needed to take risks and that it was wrong to apply health and safety culture to the countryside.

"It's a matter of knowing where the risks are but not trying to wipe them away," she added.

This post does represent the situation in the UK very well.
It is actually one of the many reasons that we chose to leave the UK and settle here in Canada a few years ago.

The children do not have the freedom to roam around freely as much as we did as kids.
This is mostly due to safety and welfare of our kids.
In Canada its not completely safe at all, but it's still much safer than the UK.

With time, I can only see it getting more tighter with generations to come. This is an issue of society as a whole.
Saying that, most of todays problems like crime, muggings,kidnappings,drug use,harassment ...etc... all stem from unemployment and recession.

I remember the welfare council estates that are all over UK. Many of these were created in 'Thatcher' era to put people on welfare together, away from middle and upper classes.
Most of these early estates were 20+ floor high rise buldings.
Imagine being a little boy on the 25th floor, small room and not even a tiny patch of grass to kick a ball.
.. These children, raised in isolation are the so called 'yobs of today'- was it their fault ??
OR are we all as society to blame ??

Hanji veer ji, segregation in society definitely creates problems. Every child needs to be loved and respected. Child is a child, its nurture and the environment shapes them so they become victims if they are neglected.
I think we are too busy as a society and children don't get the attention they deserve which has big impact on their development. This will be imprinted on their mind all through their life. They learn to love, respect, understand etc etc all the good things but don't expect this when they are in their teens if they have not already been shown as toddlers.
Share:
Facebook Twitter Reddit Pinterest Tumblr WhatsApp Email Share Link