NEW DELHI: The Centre has decided to send a team of officers to Punjab to discuss the pros and cons of building a memorial inside the Golden Temple in the name of those who died in Operation Blue Star.

The Centre's move comes a day after Lt General (retired) K S Brar, who escaped an assassination attempt by suspected Khalistani militants in London this week, questioned the building of the memorial.

Lt Gen Brar had led the Operation Blue Star to flush out terrorists from the Golden Temple in June 1984 and has been on the hit-list of Khalistani militants.

A section within intelligence and security establishment views the ongoing construction of such a memorial as an attempt by some hardliners to scratch the old wounds which may only bring bitter memory of the militancy era to the new generation.

"We are seized of the matter. We will send a team of officers to Amritsar and Chandigarh to discuss the issue in the light of the concerns expressed by many people over the construction of such a memorial", said a top home ministry official.

The construction of the 18-feet memorial, which is coming up near Akal Takht — the supreme temporal seat of the Sikhs — inside the Golden Temple, is expected to be completed before June 6, 2013 -- the next anniversary of the Operation Blue Star.

Expressing his concerns over the building of the memorial, Brar had on Wednesday said, "The Centre has to step in and stop it. Otherwise, we are going back to the early 1980s".

Talking to reporters in Mumbai after returning from London Brar also questioned the Centre's silence over such a serious matter.

Criticizing the decision of the Punjab government to allow construction of the memorial, Brar said that those being referred to as "martyrs" were actually "murderers, criminals and terrorists".

He was quoted by newspapers as saying, "They are not martyrs and you are honouring them, their families. The top politicians of the Akali Dal and the chief minister are attending these functions. They are not stopping it (the construction)".

He rued that no monuments were being built for police and Army personnel who lost their lives while protecting national integrity and sovereignty.

I think Brar is more concerned about people actually looking more into Operation Blue Star and finding the truth which the government propaganda machine can no longer contain.

Interesting posted information I took a picture of.

It basically states that none of the leaders survived beyond 153 days after ordering the desecration implied or otherwise from the day they ordered or so acted under any guise. Named are Massah Ranghar (August 3rd, 1740 - January 2nd, 1741); Zhaiah Khan (November 13, 1746 - April 13th, 1747); Jahan Khan (January 18th, 1757 - June 19th, 1757); Abdali (February 5th, 1762 - July 8th, 1762); Indira Gandhi (June 1st, 1984 - October 31st, 1984). Basically 5 months is approximate survival rate for such almighty people for their actions well advised or otherwise against the spirit of Darbar Sahib.
Most appear to act in retribution as a result of calls from within for individual Sikhs to defend Darbar Sahib. 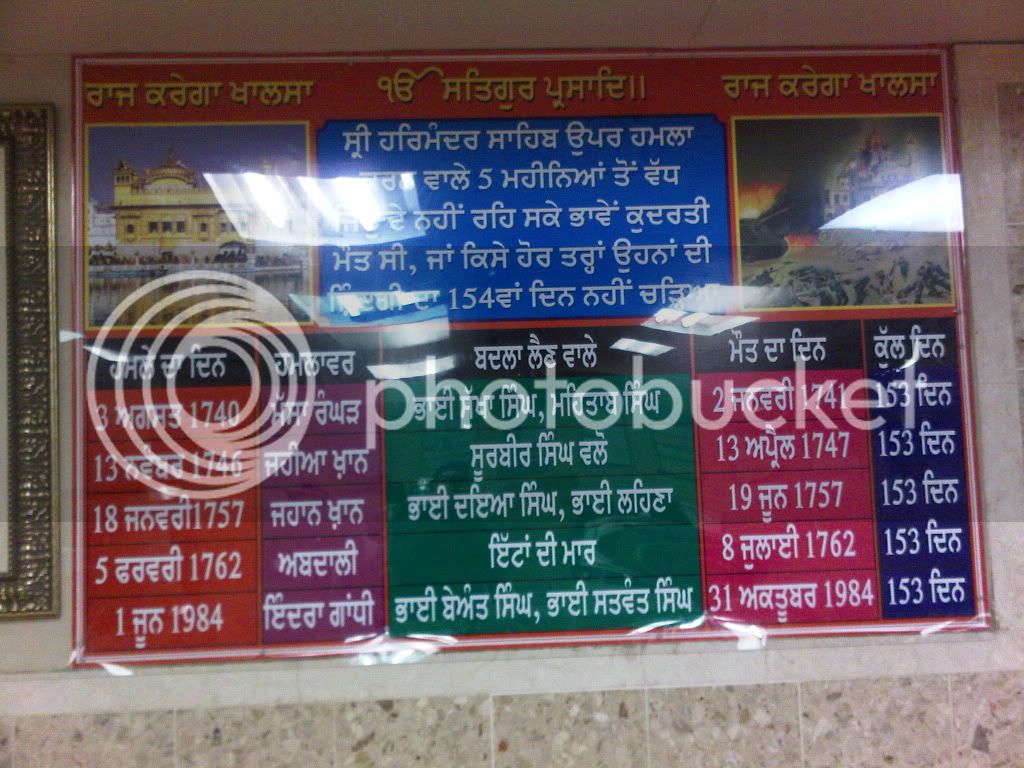