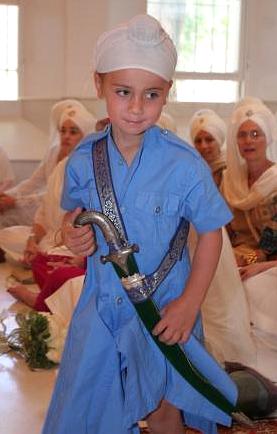 September 1, 2009 (Sacramento, CA) - AB 504 - a proposed law that would train law enforcement personnel about Sikhs and kirpans - passed unanimously through the California legislature today. The bill is just one step away from becoming law in California. It now moves on to Governor Schwarzenegger, who will hopefully sign it into law before the end of October. Extensive advocacy efforts led by the Sikh Coalition and local sangat members resulted in bipartisan, unanimous support of this legislation in both houses of the legislature.

Should it become law, this would be the first law specifically pertaining to the kirpan in the United States. The California State legislature, Assemblymember Warren Furutani, and his co-sponsors Assemblemembers Berryhill, Eng, Fong, Galgiani, Gilmore, Ma, Skinner, and Yamada and Senators Liu and Yee, should be commended for their hard work and pioneering spirit in passing this bill.

The proposed law (AB 504) would create and include training about the kirpan in the state curriculum for law enforcement officer training. While several police and sheriff's departments have recognized the need for this type of training and have been conducting it on an ad hoc basis, the bill would standardize the process state-wide. The training would specifically advise officers about "how to recognize and interact with persons carrying a kirpan."

The legislation arose out of a number of Sikhs being arrested for carrying kirpans because police mistakenly believe them to be in violation of concealed weapons laws. Such arrests violate Sikhs' rights and are a waste of taxpayers' money. Our hope is that being educated about the kirpan and its religious significance will decrease the number of wasteful arrests.

The bill was introduced by Assemblymember Warren Furutani who has worked tirelessly with the Sikh Coalition and local Sikh activists to ensure that the bill is a priority for the legislature and for the California Asian Pacific Islander Legislative Caucus. 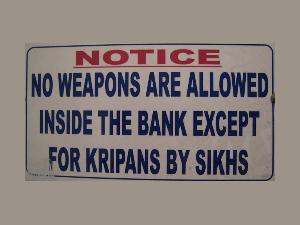 "Given Sikhs' long history in California, as well as the fact that this state has the highest number of Sikhs nationwide, it is entirely appropriate that California take this pioneering step," said Neha Singh, Western Region Director of the Sikh Coalition. "We hope that the education will help reduce the number of Sikhs needlessly being arrested for practicing their faith and focus the energy of law enforcement on actual threats to the public safety."

"AB 504 is an important bill that recognizes the state's responsibility to protect religious freedoms, while ensuring public safety," said Furutani. "The Sikh community should not live in fear of arrest by law enforcement for carrying the kirpan, which is an integral part of their religious faith."

It is thanks to the dedication of California's Sikhs that this bill has gotten this far. During the course of this campaign, over 750 Sikhs emailed elected officials, urging them to pass the bill. In addition, thirty people traveled to Sacramento to give in-person testimonies at legislative committee hearings, including both the Assembly and Senate Public Committees.

The bill will now make its way to Governor Arnold Schwarzenegger. He will decide whether to sign it into law. For that effort, we will need all California's Sikhs to reach out to the governor's office to ask for his support. We will provide more information on that effort in the coming weeks.

For other questions about AB 504, or to join our lobbying efforts for this bill, please email us at legislative@sikhcoalition.org