Arts/Society Bollywood Film Banned In India Over Fear Of Unrest

Aarakshan, a Bollywood film about India's controversial quota system for disadvantaged groups has been banned in three states, for fear that its discriminatory language may cause protests 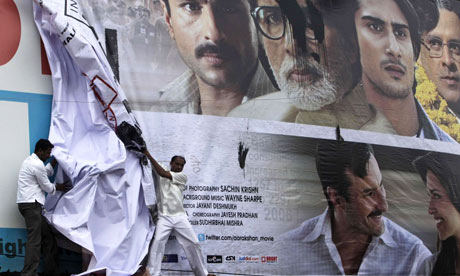 A controversial Bollywood film which touches on the highly-sensitive subject of affirmative action for the Dalit community (the caste formerly known as "untouchables") in the country's education system, has been banned in three Indian states.

Local authorities in the northern states of Uttar Pradesh and Punjab, and Andhra Pradesh in the south fear screenings of Aarakshan (Reservation) will cause law and order issues among Hindus. The drama, directed by well-known Indian film-maker Prakash Jha and starring Bollywoodstar Amitabh Bachchan, has been criticised for using objectionable terms to describe people from the Dalit community, who were once denied access to decent job and education prospects.

Jha, who has a history of making films which touch on sensitive social issues, has denied suggestions that Aarakshan paints a negative image of Dalits, a self-imposed title which means broken or suppressed.

"In India there are people who benefit from this policy [of quotas] and there are those who have missed an opportunity because of the policy," he said last week. "Reservation and the quota system is a hard-hitting reality. It is almost an India-versus-India situation and by showing this in my movie, I am trying to bridge the gap."

Writing on his blog, Bachchan said critics were acting out of ignorance. "Without any knowledge of what the film contains, without any desire to determine the trust and the most basic principles of law of democracy, it has merely strengthened my and many others' fear of the weakness it conveys of our belief in governance and its ethics," he wrote.

Posters for the film have been vandalised by protesters, many of whom have also objected to the casting of Saif Ali Khan, a Muslim aristocrat, as a Dalit.
K

The ApunKaChoice movie review of Aarakshan. Prakash Jha’s latest film Aarakshan, which has raked up a lot of controversy, is a study in affectations. The hyperventilating characters in it move about spouting dialogue-heavy harangues armed with words like siddhant, anushasan, nishtha and a variety of other such chaste Hindi terms that a crash course in a roadside Hindi tutorial centre might help you cotton on to. And if you can endure this copious stream of filminess, you might as well resign to the fact that the film has no darned point to make. The film’s title is a misnomer. Aarakshan is not actually about Aarakshan. It’s…um…more of a muddle that no more than superficially touches upon topical issues like the commercialization of education and, of course, a bit of caste-based reservation as well.

All the hype and hoopla surrounding the movie seems much ado about nothing once you have sat through this 2-hr-45-minute long boring lecture on the ills of education system. And you walk out feeling none the wiser. A bit short-changed perhaps.

So we see Amitabh Bachchan playing a college principal as principled as there ever was. Not for him the sycophancy for the neta log trying to get their underperforming kin admitted in the prestigious Shakuntala Thakaral Mahavidyalaya he heads. Not for him the craven surrender when his principles are challenged. At home, his daughter (Deepika Padukone) and wife (Tanvi Azmi) stoically support the uptight idealist, save for minor squeaks of protest. At college, a wily professor (Manoj Bajpai) wants to take over as the principal and make an easy buck by opening private coaching centres throughout the state.

Jha proffers to present the two sides of the Aarakshan debate through the characters of a genius dalit teacher (Saif Ali Khan) and a rich student (Prateik Babbar), who are friends until the honourable Supreme Court flips open the Pandora’s box by passing an order supporting 27 percent reservation for backward classes in educational institutions.

Thereafter, we are subjected to long arguments both in favour of and against the reservation as writer Arjum Rajabali has a field day in unleashing the most turgid brand of dialoguebaazi, buttressed by heavy background score, to drive home the point that grave issues are under discussion on screen. Point taken! But why pray does Prakash Jha abandon the issue of reservation half way and turn the film into an indictment of the commercialization of education? And why does Jha make Amitabh Bachchan deliver his dialogues like he was recording a social message for the ministry of education?

Almost every actor in the movie is made to play the character and say the lines they can’t relate to. Hence the affectation. So when Saif Ali Khan rants about the ‘uthal puthal’ in samaaj due to reservation and how suppressed his own dalit samaaj has been over the years, you try hard to believe him, but only in vain. When Prateik Babbar whines about losing what’s rightfully his to someone who comes under quota, you are at pains to empathize with the unfortunate chap. Likewise, Deepika Padukone’s glib about her righteous father sounds every word as affected as the old man’s blusters about principles and righteousness. In fact, Jha manages the feat of making a talented actor like Manoj Bajpai look like a caricature.

Aarakshan offers no deep insight into the subject it claims to deal with. The arguments presented are facile, at best. But the most shocking is cavalier disregard with which Jha stunts the film’s main issue of reservation and puts the movie on a different plotline altogether, turning it into a muddle.

In short, Aarakshan is painfully pointless, boring and not a wee bit enlightening. One would rather go fly a kite than to reserve a seat for this movie.