Large numbers of Sikh, Hindu and other ethnic minority voters support the British National Party's hard-line anti-immigration stance, its leader Nick Griffin claimed today.
But he said the BNP's purpose remained to stand up for 'indigenous Brits' which did not include ethnic minorities, even those born here who had fought for their country in the armed forces.
He also declared that 'Islam and our society don't mix' and said he wanted to swap 'the very large number' of al Qaeda-supporting British Muslims for former Gurkhas and their families.
Mr Griffin was speaking after pledging to lift a bar on non-whites joining the party in response to court action by an equalities watchdog. 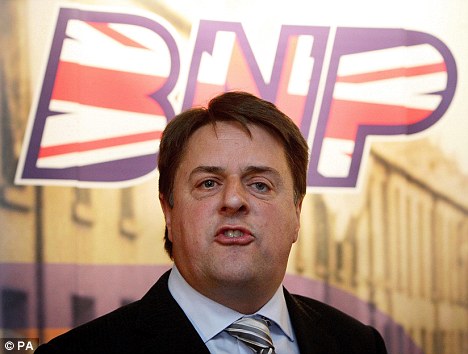 Interviewed on Sky News' Sunday Live with Adam Boulton, he denied that the party was racist and insisted that the new membership rules would not undermine its fundamental aims.
'There are three different groups of people in this multicultural Britain now,' he said.
'There's the indigenous Brits, people like you and me; there's settled ethnic minorities populations who are here legally and legitimately and they are civically British and we have no problem with them at all; and then we have the third block, the colonists, people wanting to change our country into something completely different,' Mr Griffin said.


'A large number of the settled ethnic minority population, Sikhs, Hindus and so on, are actually very much in favour of the British National Party's stance about stopping any further immigration.'
Asked if the sorts of British ethnic minorities he believed supported the party were included in the 'indigenous' group the party would stand up for, he said: 'Oh no, no, no, no, no.
'Of course they are not indigenous. We are saying they are civically British, which is a matter of common sense, also that they are patently not of the ancestral stock of this country.
'It doesn't make them bad, it just makes them a little bit different.' 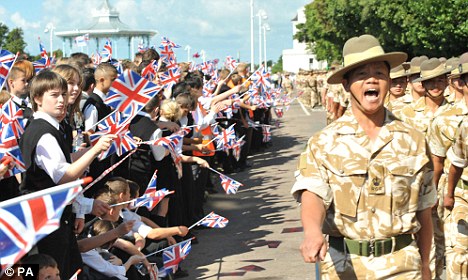 He went on: 'It's not a matter of racism; it's a matter of standing up for the indigenous. No-one in this country is here for the English, the Scots, the Irish, the Welsh.
'Caucasian is one phrase for it. Everyone knows who an indigenous Brit is. Everyone knows that someone for instance whose parents came from the West Indies and so on and has perhaps been in the Army and fought for this country, they are entitled to be here, they are entitled to be here, they are civically British, they are not ethnically British. It is not a racist position.'
Asked about comments that Islam was 'vicious and wicked', he said: 'I believe that a faith which puts half the population, the women, down as inferior to men, a faith which bans freedom of speech, a faith which stones rape victims to death, I believe that is vicious and wicked.

'It's not all of what Islam is about. Islam is also for instance about opposing usury and that is a very good position. But Islam and our society don't mix.'
He suggested a 'direct swap' with Muslims could solve the problem of the UK not having sufficient space to offer all former Gurkhas and their families the right to settle in the UK.
'We would actually be happy to have the Gurkhas if we can swap them, for instance, for the very significant number from the Muslim population in this country who identify with al Qaida and who are not loyal to this country. We would do a straight swap,' he said.
Mr Griffin said he would 'have a problem' with any BNP member marrying a non-white.
'We would have a problem with that just as many West Indians, many Sikhs, people of all different races and creeds and nationalities very often have a common natural human instinct which is to want their children and their grandchildren to look like them, to identify with their culture,' he said.
'The whole world faces a big problem with so many different peoples, different ethnic groups mixing that we are losing all our separate cultures and identities.'

ahaha what a douchebag.

AusDesi - Ordinarily I would delete your comment. Problem is a lot of thoughts like that come to the minds of many after reading the article. It is hard to describe this guy! His command of the English language is pretty weak on top of everything else.

In the interests of forum etiquette - you are warned about the language.


Narayanjot Kaur said:
AusDesi - Ordinarily I would delete your comment. Problem is a lot of thoughts like that come to the minds of many after reading the article. It is hard to describe this guy! His command of the English language is pretty weak on top of everything else.

In the interests of forum etiquette - you are warned about the language.
Click to expand...

Sorry will keep in mind next time.

I saw Nick Griffin on BBC's Question Time. The man is a dangerous extremist masquerading as moderate. However, many of his arguments are correct and attract ordinary people, particularly on the issue of immigration. You must separate the person from the issue and deal with the latter on its merits.

If you go into London or other big cities in the UK these days, you'd think you've landed in some Arab or African country, or in India. There are so many non-white, recent immigrants. Personally, I don't like it.

In the 1970s, the predecessor of the BNP (British National Party) was the NF (National Front). They marched through various towns and engaged in violence. I recall when my older cousins and uncles fought the NF skinheads on the streets of Southall, the main population of Sikhs in London. The NF received such a kicking from those old-style village Jatts that they never returned - the same cannot be said of the Bangladeshi East London where the Bangladeshis did not have capability to fight back like Sikhs.

Similarly, the black West Indies population of Brixton were good fighters and beat off the skinheads. Those were different days and the fight was against pure racism.

Today it's different. Many parts of Britain are unrecognisable for all the immigrants, particularly Muslims and Africans. That is why many previous immigrants - Sikhs, Hindus, others - behind closed doors will say that this is too much. This has been a deliberate policy of the left-wing Labour Party who have an obsession with proving that everyone is equal. Yes, everyone is equal, but they're not the same and it's naive to base immigration policy on this notion. A former Labour speechwriter reveals how the Left wanted "to rub the Right's nose in diversity and render their arguments out of date" - Don't listen to the whingers - London needs immigrants | News

I don't think the BNP will survive, but the mainstream political parties must grasp the immigration nettle because it is out of control.

Mostly I am replying to say that if Mr. Nick ji is a moderate or thinks he is a moderate, then he needs to hire a new costume designer. :welcome:

But to be more sober in my reply: The questions raised by immigration are affecting the whole of the western world. US, Canada, Europe, and now South America. The US is a country of immigrants though some of them act as if they were here before the Native Americans. That is the nature of the human beast. Now even in historically moderate Canada public opinion is going negative. The turbulence is real -- and the big mistake politicians make is taking stands based on their definitions of truth and justice (which no one, including their supporters, take seriously because they are politicians). So far no one has said, Let's face up to the facts - Immigration is causing economic and social upheaval -- Let's analyze how this upheaval is a problem -- Let's come up with sane strategies for addressing the problems as we understand them.

Instead these rabid dogs pit groups against one another. Short term solutions will appear to attract significant backing because the most vocal elements in any voter population will be a minority of hell-raisers. That in turn causes the perception that things are almost completely out of control, and then everyone else panics and buys into drastic and unthinking actions.

The true experts at this kind of divide, panic and rule strategy were Lenin and Hitler. Lenin and his crew managed to overturn a budding and immature attempt at democracy in Russia. Hitler managed to exterminate 6 to 8,000,000 Jews, gypsies, mentally retarded, mentally ill, socialists, catholics, and anyone else who stood in his way in a few years time; and it took a World War and 23 million more dead in Europe to put him out of his misery.