In one of the sublime expressions of human soul’s homage to the Eternal, Guru Nanak says: How can one describe Thy beauty and the might of Thy works? In moments when one confronts the “vastness and wonder” of His creation, one is struck dumb and utterly speechless. It is then that the words break and fail to comprehend the utter majesty and infinity of the Word. It is with this sense of dazzle and wonder that I have looked at the avian glory reflected in the sacred hymns of Guru Granth Sahib.

Birds have been recurring motifs, themes and images in folklore, mythology religion and in the greatest of the works of art. From the Phoenix that emerges young from its ashes, to the charioting Garunda; from “the immortal” nightingale to the eternal skylark, birds have provided powerful symbolism in human creation. My first visual exposure to birds was the as much through seeing them fly and sing as the references to them in the sacred hymns of the Adi Granth.

The black koel (Eudynamys Scolopacea) that darts through leafy covers, stabbing the silence of midsummer afternoons, was as memorable an auditory, even visual image, as the as a bird image of (separation); a picture of a burnt out blackened human soul, lost and forlorn. These are the two dominant images that I have grown up with; these are pictures and sounds that will always haunt me; the Koel that flaps past restlessly and the papiha (Cuculus Varins) whose heart-rendering cries rock the summer dawns.

Birds as a species of life and as a part of the landscape of the physical world provide recurring images of the changing, the perishing forms of life that must return to dust, dust as they are:

Gone are those free birds of the air,
Who had their nurture on the happy plains;
How transient is life? (Sri Rag)

For nothing shall ever live and survive. Neither the lunar nor the solar spheres. Even the moving winds in the limitless spaces shall one day cease. But Thou alone art and shall endure. Unlike the transmuted immortal nightingale, not born for death, the birds in Guru Nanak’s poetry share the mortality of human life.

Yet another theme that recurs relate to the Creator as the great provider. He looks after men, beasts and birds. In one of the most exquisite expressions of the theme of the Divine care pervading the entire universe there is a description of birds fluttering about on the vast amphitheatre of time. They are not untended or uncared for:

Behold the birds of the air,
They build themselves no granaries;
They construct no tanks of water.
They depend on the forest trees,
And on the natural pools.
The Lord provideth them all,
Thou alone art! Thou alone art! (Ragh hajh ki var)

He greens the dry trees. He provides for the myriad insects that fly and creep and crawl in rocks and stones. In a remarkable reference to the riddle and fascination that is bird migration, there is a picture of the cranes (Anthropoides Virgo) that come from the cold North:

The migrating cranes fly hundreds of miles,
They leave their young behind them.
Think, O Man: who feedeth the young birds?

If that had been all for bird imagery, birds would have had probably an unjust deal. It is in the use of bird imagery as an expression of the human soul for the Divine that birds provide to my mind the sublime images created from these winged creatures. In one of the enunciations of Rag Asa, the lost human soul or those in whom “the eyes of the spirit have not been opened,” have been likened to a “bird without wings.”

It is characteristic of great poetry that it just cannot be translated. Whenever I have heard a good musician sing these lines, I have always felt sad and elevated, depressed and yet exalted. For one feels so much involved with the world and its meaningless pursuit of the shadows, in a state of sorrow, in a condition of forgetfulness of the Name.

It would be a fascinating study to trace all of the bird images in Guru Granth Sahib. What a rich variety of names of birds fleet across its pages, like splendid motifs woven into the limitless expense of the Divine tapestry of the firmament.

In a magnificent description of the Light that descended on Gautam Buddha there is a reference to the chorus of bird song. In this chorus, the Koel, the sunbird, the green hammersmith and the dove sing in a holy concordance of sounds on “that high dawn” when an unknown peace spread across the universe.

But in Guru Nanak’s hymns not only birds as a form of life but individual species are woven into beautiful images. Anyone who on a moonlit night has gone to a river can have an experience of an utterly inexpressible kind when Surkhabs (Tadorna Ferruginea) also called Sheldrakes, fly past silhouetted against the sky in an eternal quest. Their honking the stillness of the night is one of the most haunting auditory images. It is this Sheldrake that finds an articulation in Sri Rag:

Love God as the Sheldrake in the fable loveth the sun;
It sleepeth not for a moment:
At night when it cannot see,
It considers the Beloved, who is close to be far.

In the same composition yet another bird comes in as a symbol of the inexhorable love. Like the fish who loves water and dies separated from it, the Chatrik bird reaches for the raindrops:

Love God even as the Chatrik bird loveth the raindrops.
Rivers in spate and the drenched uplands
Are of no avail to the Chatrik;
Nothing but the raindrops can quench its thirst.

Yet the world is not as innocent as the reach of a bird for the raindrops. Or as the ceaseless quest of the Koel in the birha or even the haunting call of the lonely ducks longing for each other on a shivering still night. There is a fierce struggle as the bird and the predator, the man and the tyrant are cast away friendlessly:

As the small birds of the air are helpless
Against the hawk swooping down from the skies,
And against the nets of the hunter below. (Sri Rag)

This passage is so powerfully evocative. Like Baba Sheikh Farid’s description of the tragedy of an egret (Egretta garzetta) prancing about merrily when it is swooped upon by the fierce nature’s “tooth and claw” embodiment, a hawk (Spizaetus cirrhatus).

In yet another beautiful sense the birds of the air are airborne symbols of human soul’s reach for the Divine. The very fact that you fly high in the windy spaces does not mean that your are spiritually nearer the One who dwells everywhere. A mere wandering like a bird would not take you to His portals:

Where I hover like a bird soaring
Through skies innumerable,
And vanish beyond the range of mortal vision,
Self-sustained, not needing food or drink
Even so, my God, I could not know Thy price,
Nor say how great is Thy Name. (Sri Rag)

Life has many stages or for that matter seven ages. One way of looking at it is the pattern of craving; craving that ranges from the mother’s breast to games and sports, to food and drink, to lust and passion. This relentless rat race goes on till flames consume and the body is reduced to ashes. Yet another species of birds illustrates the theme and this time it is the swan (Cygnus olor) itself:

The swan has flown, who knows where.
He came and he went and his name is forgotten.
After him the obsequies : the eating of leaf-plates
And the feeding of crows. (Majh Var)

It is to the Bara Maha (Song of Twelve Months) that one should turn for the most beautiful series of bird images. It is in Bara Maha too that the birds are shorn of their metaphysical or theological implications. The birds emerge as they are, beautiful and free, neither the sad symbols of the transience of life, nor the fear and tyranny of the clawed hawks. It is with this that the month of (March-April) begins. It is appropriately the month month of the Koel:

It rains.
The nights are dark.
There is no peace for me.
Frogs croak in contentment.
Pea{censored}s cry with joy.
The papeeha calls peeooh, peeooh.

To anyone who looks on birds as the finest creations of God, the Adi Granth would make an ecstatic reading, an experience of such an inexpressible joy in which one is literally carried on the wings of the birds, singing unto the glory of the joyous dawns. For that is the characteristic of Guru Nanak’s poetry, that is prophecy, and prophecy that is music and music that is divine.

To the infinite human variations of intellectual endowments, the Adi Granth is a great communion. The birds that perish and the birds that in perishing live in this holiest of the books, cover a vast range.

There are the chirping mynas, the prancing egrets, the snow-white swans, the shrieking koels, the forlorn papeehas, the fierce hawks, the migrating cranes and of course the ever present and ever cawing crows. They share the human characteristic of the body being made of clay and yet they are transmuted into images that live and abide; images that are so powerful evocative as much of a landscape as of a picture, a sound and a prophecy.

Life has been compared by poets and prophets to a journey and sometimes to a bridge. The sun sets and the sun rises as the cycle of seasons rolls on inexorably. We, the airy nothings, caught in the cycle of birth and death appear and bow out of the world, more often unsung and unlamented. We can only achieve liberation through Him. But before that happens to the blessed few, we are the birds who rise in quest of food and drink in the morning and return to roost in our ramshackle nest-like abodes of concrete mud and mortar:

Like birds of dusk settling on trees
To roost for the night
Some joyous, some sorrowing; all lost in themselves.
When dawns the day and gone is the night
They look up at the sky and resume the flight.

The English excerpts are reproduce from Khushwant Singh’s “A History of the Sikhs” (Vol. I) and George Allen and Unwin’s publication, “The Sacred Writings of the Sikhs.” The zoological identification of the birds is based on Salim Ali’s, “Handbook of the Birds of India and Pakistan.”

Source: The Panjab Past and Present, April 1979. 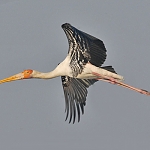 The Birds of Gurbani