​
Bhai Vir Singh’s house on Lawrence Road is a living monument of the great writer. But how many of us know about it, or have visited it to feel the legendary grace of the man? 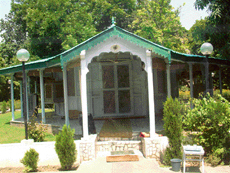 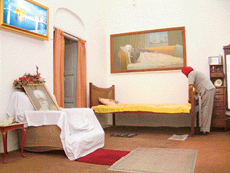 His bedroom, where all the belongings of the celebrated writer have been preserved lovingly. — Photos by Rajiv Sharma

The tastefully decorated residence of Bhai Vir Singh, generally hailed as the father of the modern Punjabi literature, is perhaps the most beautiful house (of the state) dating back to the British time. The house provides a nice green space in the concrete commercial jungle of the posh Lawrence Road.

While the houses of many Punjabi writers and poets, including Bawa Balwant belonging to Amritsar, have either disappeared or are in dilapidated condition, the residence of Bhai Vir Singh remains intact and all belongings of the celebrity Punjabi writer have been preserved in the original shape.
The picturesque residence, surrounded by lush green spacious gardens and orchard, which should have been pilgrimage centre for the Punjabi writers, is visited by few, as most of the residents of the city are not even aware about the rich heritage of Punjabi literature housed there.

Bhai Vir Singh was very versatile. He was poet, novelist and critic. He found spiritual lessons in the objects of Nature. A kikar tree is a symbol of the spiritual seeker, who must face the barbs and arrows of the worldly people. The poet’s choice of plants in his house tells us a great deal about him as a person.

The sprawling house, with rare plants and herbs, shows the rich taste and high thinking of Bhai Vir Singh and his love for Nature. A casual visitor gets astounded to find big trees, including chikoo, cheel, neem, walnut, mango, litchi, kachnar, jack fruit, rosary, frangipani, kaadi patta, simbal, berry jujube, plum, banana and dheon in the house. Four bouquets taken from the garden of Bhai Vir Singh’s house are taken to the Golden Temple every morning by 85-year-old Bibi Amrit Kaur who lives in the house.

Though the ancestral house of Bhai Vir Singh in Katra Gaarbha Singh in the walled city has disappeared, this new house bought from a Christian priest of a missionary school in 1925 stands as a monument of the British era. He moved into this house in 1930.

Sardar Ujwal Singh and Teja Singh were instrumental in converting the house into a memorial after his death in 1957. His younger brother, Dr Balbir Singh, whom he treated like his own son, set up a trust where the entire collection of the royalty of his works has been kept aside to continue his dream to nurture Punjabi literature.

Unlike the residence of Bhai Vir Singh, the half-timbered house where William Shakespeare was born in 1564, continues to be the most cherished historic place and is a frequently visited tourist place. Descendants of the dramatist lived there until the nineteenth century, and it has been a place of pilgrimage for over 250 years.

The stunning house of Bhai Vir Singh could also be opened to public on this pattern.

The rare furnishings and personal collections of Bhai Vir Singh feature exceptional furnishings and domestic items. It would not be wrong to say that aspects of his multifarious personality are on display here. The old furniture with unique carving, including a cot and a writing table, has been well preserved in the house. The exhibition in the gallery of the house deals with artifacts. This impressive house gets the visitor close to the room where the homeopathy medicines used by Bhai Vir Singh are preserved. Not to be missed are old tub and kitchen gadgets, including a wooden juicer.
The hilly hut type room (seems replica of Hemkunt Sahib) constructed especially for the holy Guru Granth Sahib shows his unflinching faith in the Almighty.

The secluded study room has preserved the rare manuscripts. The illuminated life-size pictures of Bhai Vir Singh in different rooms are, however, new additions which add to the beauty of the house.
The renowned journalist and former member of Rajya Sabha, Mr Kuldip Nayyar, had given funds for the library in the complex which is likely to be completed shortly. Bhai Vir Singh took active interest in the affairs of the Singh Sabha Movement. He was a poet, scholar and major figure in the Sikh renaissance and in the movement for the revival and renewal of Punjabi literary tradition.

Bhai Vir Singh was instrumental in locating the site of Gurdwara Hemkunt Sahib. In the late nineteenth century, Sikhs began to search for Hemkunt

— a place high in the Himalayan mountains and mentioned in the autobiographical Bachitra Natak of Guru Gobind Singh. The title of this work roughly translates as the “wonderful drama”.

Pandit Tara Singh Narotam, a nineteenth century Nirmala scholar, was the first Sikh to trace the geographical location of Hemkunt. He wrote of Hemkunt as one among the 508 Sikh shrines he described in Sri Gur Tirath Sangrah (first published in 1884).

Later, Bhai Vir Singh was instrumental in developing Hemkunt after it had been, in a sense, re-discovered by another Sikh in search of the Guru’s tap asthan. Sohan Singh was a retired granthi from the Indian army who was working in a gurdwara (Sikh temple) in Tehri Garhwal. In 1932, he read the description of Hemkunt in Bhai Vir Singh’s Sri Kalgidhar Chamatkar (1929). Bhai Vir Singh’s description was so compelling that on reading it Sant Sohan Singh resolved to search for the place where Guru Gobind Singh had meditated. With the inspiration of Bhai Vir Singh, the first jatha (group of pilgrims) was formed and sponsored by the Chief Khalsa Diwan, Amritsar, in 1952. In 1958, the responsibility for Hemkunt Sahib shifted to the Chief Khalsa Diwan branch in Kanpur.

‘The sixth river’ Born on December 5, 1872, in Amritsar, Bhai Vir Singh was the oldest of Dr Charan Singh’s three sons. The family traces its ancestry back to Diwan Kaura Mall, who rose to the position of vice-governor of Multan, under Nawab Mir Mu’ln ul-Mulk, with the title of Maharaja Bahadur. Baba Kahn Singh (1788-1878) was perhaps the first in the family to be regularly sworn a Sikh.

Regarded as the Bhai Gurdas of the twentieth century, his most important works are Guru Nanak Chamatkar, Kalgidhar Chamatkar, Baba Nodh Singh and Meray Saeeyan Jeeo. The government and Panjab University recognised Bhai Vir Singh’s creative talent. The Government of India gave him the honour of Padam Shri. H. Chattopadhaya called him the “sixth river in the land of the five rivers”. The officials of East Punjab University conferred a degree of “Doctor of Oriental Learning” on him.

The year 1898 saw the publication of Bhai Vir Singh’s novel Sundari, a landmark in the modern Punjabi literature. Some critics went so far as to call it the first novel of the Punjabi language. He also wrote three excellent biographies: Sri Kalgidhar Chamatkar (1925), Sri Guru Nanak Chamatkar (1928), and Asht Gur Chamatkar (1951). Considered to be the harbinger of the modern Punjabi literature, Bhai Vir Singh wrote prose, novels, poems, plays and historical research. He also edited and published Prachin Panth Prakash and Janamsakhi, the life-story of Guru Nanak Dev.