A Persian poem by Diwân-e-Goya – Bhai Nand Lal Goya (1633-1713) born in Ghazni, Afghanistan. Persian is so called because it originated from Persis (Pars) with the advent of the Achaemenid Empire, hence the name Persian (Parsi or Farsi). It is primarily spoken in Iran, Afghanistan (officially known as Dari since 1958) and Tajikistan. 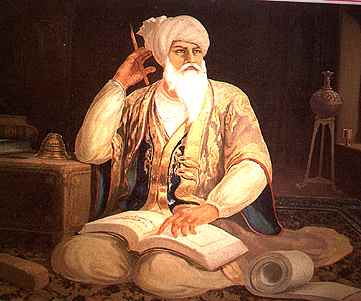 With a long history of literature in the form of Middle Persian before Islam, Farsi was the first language in Muslim civilization to break through Arabic’s monopoly as a written language, and the writing of poetry in Farsi was established as a court tradition in many eastern courts.

There are very many famous Farsi poets i.e. Ferdowsi, Rumi, Hafez, Saadi Shirazi but my research did not come up with much information about either Goya himself, or his Farsi work in the current population of the key three Central Asian nations where Farsi is an official language.

Bhai Nand Lal Goya (1633-1713) was an Afghan Sikh and a great scholar of Persian and Arabic. He was one of the 52 scholar-poets at the court of Guru Gobind Singh, and rose to become the most eminent poet in the Court assembly (Majlis).

From an early age, he was educated in the classical languages of Arabic and Persian. He had a natural aptitude for poetry and began composing poetry at the age of 12 under the pen name ‘Goya.’

Throughout his life, he composed many books and documents in the classical Persian genres. Bhai Nand Lal Ji’s works are today regarded as canonical commentaries on the teachings of Guru Granth Sahib and the Sikh way of life.

I was first introduced to his poems when attending my local Gurdwara in Karte Parwan, Kabul where I spent my early years growing up as a child. Our community in Afghanistan had always shown enthusiasm for reciting Goya’s poems. Bhai Nand Lal Ji’s contribution to Sikh literature made us all proud because he was the son of Afghanistan.

Nevertheless, since most of Sikhs have moved out of Afghanistan because of the long-standing conflicts, I feel that we, the Afghan Sikhs living abroad, are loosing touch with both Dari and Pashto, our national languages.

The reason is simple; the young generation in the west can hardly understand either of them because most of us speak Hindko, a dialect of Panjabi at home, along with the language of the country we currently live in.

There are some Kirtanis from the Indian sub-continent who sing the poems of Goya but their pronunciation is never correct. It is not there fault as they are singing in a foreign language. Of course there are or have been exceptions such as the late Sant Singh Maskeen and the late Amrik Singh Zakhmi.

Nevertheless I wanted to recite Goya the way it must have sounded to Guru Gobind Singh Ji’ over 3 centuries ago in the native accent of Bhai Nand Lal Ji.

Ba Har Kuja Ke Rawi – ‘Wherever you go’ is my first attempt to recite a poem of Nand Lal Ji. This new project means to educate Sikhs and others about Goya’s Farsi work and to raise awareness of his Afghan roots.

I would love to recite many of Goya’s poems with the aim of sharing this work with native Farsi/ Dari speakers in Iran, Afghanistan and Tajikistan but also with Sikhs living all over the world.

If you are a musician, composer, film-maker and would like to help me in spreading Goya’s work then please contact me.

Nand lal was an examplry poet. he was devotee of guru Gobind singh. but was he an amritdhari sikh of not. i have doubt in my mind. please advise whoever started this page

swarn bains said:
Nand lal was an examplry poet. he was devotee of guru Gobind singh. but was he an amritdhari sikh of not. i have doubt in my mind. please advise whoever started this page
Click to expand...

The fact is that the poet’s name is Nand Lal even after 13th April 1699 or anytime after, it clearly shows that he did not take khandei de pahul for the reasons only known to himself.
S

Is his name Bhai Nand Lal or Bhai Nand Lal Singh? It can’t be both. If the latter is true, then why is his poetry under the former name?
Can you provide some references to your claim please? Thanks.
Last edited: Jan 9, 2018
S

Tejwant Singh said:
Is his name Bhai Nand Lal or Bhai Nand Lal Singh? It can’t be both. If the latter is true, then why is his poetry under the former name?
Can you provide some references to your claim please. Thanks.
Click to expand...

We have to rely on secondary information provided by historians & Katha Vaachaks.

singhbj said:
Your point is valid but just like

We have to rely on secondary information provided by historians & Katha Vaachaks.
Click to expand...

Still waiting for the response to my original question.