Not long after the terror alert level was raised to high, truck driver Amar Singh was working when a stranger approached and said: "You look like a terrorist. You should be on a terrorist watch list."

Mr Singh, who was sitting in his parked truck in Wollongong, was perplexed. He certainly was not an extremist and he had never identified as Muslim.

Yet his experience matches that of other Australian Sikhs, who say they have shared the brunt of anti-Islamic sentiment in some parts of the community. 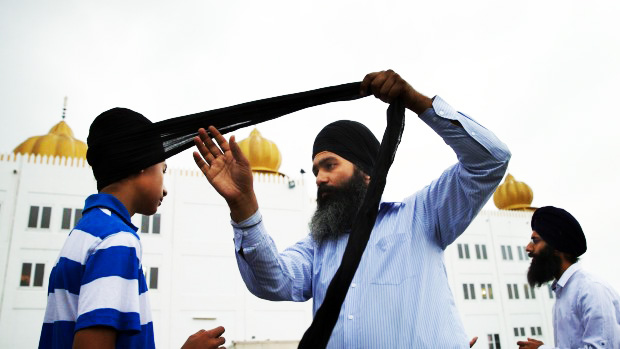 Sikhs say they are increasingly the victims of backlashes against Islamic extremism as people link turbans to terrorism. Photo: Wolter Peeters


Sikh leaders young and old say racism has increased since the terror alert level was lifted and the Sydney siege, as some people conflate Sikh turbans and beards with terrorism.

Mr Singh, who is the president of charity Turbans 4 Australia, said it had become "pretty much an everyday thing" for Sikhs to have abuse hurled at them.

He has been called an "Islamic terrorist", told to "go back", and even had a child point at him and say "bad man" in the middle of a supermarket.

"They confuse us with what they see on television, with the IS and the Taliban. They relate us to these terrorists, the worst of the worst," Mr Singh said.

Sikhism has one of the fastest-growing religious populations in Australia. The number of people who identify themselves as Sikhs increased nearly 177 per cent over five years, with 72,000 Sikhs recorded in the most recent census.

Followers of Sikhism have a distinct appearance, as it is a religious requirement for them to wear the turban, a symbol of honour and peace, and to leave their hair and beards uncut to show acceptance of the human form as the will of God.

Sydney University Sikh Society secretary Gursimrat Bawa said the racial vilification of Sikhs first started after 9/11 and had increased in recent months. He recounted a story of a friend being asked "why did you do this to our country?" as he waited at Central station in the week after the siege.

Mr Bawa said the fear of abuse had made some young Sikhs nervous about outwardly showing signs of their faith.

"It is a point that comes to mind. I have had other people think that maybe it would be easier [to take off the turban] but you got to stay strong and believe in your faith," he said.

Dibjot Singh, 22, said he found being treated with suspicion more common but just as noticeable as the verbal abuse.

"You always get that little furtive look, especially after the siege. People look at you a little bit differently, it's not always openly, but you know what they are thinking," Mr Singh said.

Sikh associations, community groups and charities said educating the community about the beliefs and values of Sikhism had now become a priority.

He regularly hosts hundreds of school students at the The Sikh Centre in Glenwood and is organising a open day for the public to attend in April.

Another organisation, Turbans and Trust, attends festivals and events and allows people to try on turbans.

Co-founder Harjit Singh said the project showed people that turbans were not items of fear and Sikhs should not be associated with threat.

"By the end of the experience you might have a different perception of the turban. Next time you see a person you think is un-Australian you might have a conversation with them and learn something about them," Mr Singh said.