Intense trade of fire occurred between police and unknown attackers after the attack. Five security men have been killed and two injured who were shifted to hospital. Police have cordoned off the area.

Several Sri Lankan players reportedly sustained injuries in the incident. Pakistan team has directed to stay in the hotel whereas Sri Lankan team has been shifted to Gaddafi Stadium.

Manager cricket team told Geo News that Pakistan cricket team will go to stadium after getting the security clearance.

This seems to be the last nail in the coffin as far as Pakistani Sports is concerned... too bad...
K

Aman Singh said:
This seems to last nail on the coffin as far as Pakistani Sports is concerned... too bad...
Click to expand...

Its sad that the Only Asian country which has given competetion in Fast Bowling to English,Australian and West Indies will cease to exist as cricketing power

The attack raises several questions ...right from the convoy, the bus which was not bullet proof..to absolutely no security on the route....now they are jumping to blame India...

It is just another game to trying to prove that they are not the perpetrators of violence but the victims ...the Mumbai attack has brought them to a position where they are on the verge of being declared a terrorist nation ...

The Fact is that Pakistan is a University of Terrorists and have students from the world over ...with the same objective to establish DAR-UL-ISLAM all over the world .

They are such fools that instead of using those beautiful mountains for tourism they used it for terrorism.

WASHINGTON (CNN) -- The "most worrisome" part of the U.S.-led war in Afghanistan has become the havens the Taliban and other insurgents have carved out in neighboring Pakistan, U.S. Defense Secretary Robert Gates said. 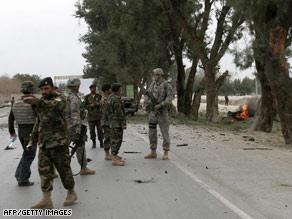 Afghan and U.S. soldiers walk at the site of a suicide attack outside Jalalabad in Nangarhar province Sunday.

Gates said the United States had a similar perch in Pakistan when U.S. and Pakistani officials supported Afghanistan's mujahedeen rebels against the Soviet Union in the 1980s -- "and let me tell you, it made a big difference."
"I think as long as they have a safe haven to operate there, it's going to be a problem for us in Afghanistan," he told NBC's "Meet the Press" on Sunday.
The Pentagon is in the process of sending an additional 17,000 troops to Afghanistan, the original front in the "war on terrorism" sparked by the September 2001 attacks on New York and Washington. They will be tasked primarily with clamping down on that border, a military official with specific knowledge of the deployment told CNN earlier this month.
Adm. Mike Mullen, the chairman of the Joint Chiefs of Staff, told CNN's "State of the Union" the troops will also be there to safeguard the country's upcoming presidential election. But that mission could be jeopardized by Afghan President Hamid Karzai's recent call to move that vote up from August to April, Mullen said.
"I'm on a pretty tight timeline, right now, to get security forces there in order to provide the kind of security for the elections," he said. "And so moving those dates to the left certainly generates a higher level of risk with respect to security for those elections, which we want to be free and fair as well as secure."
Karzai was named the head of an interim Afghan government after the U.S.-led invasion that dislodged the Taliban, which ruled most of Afghanistan before the attacks and allowed al Qaeda to operate from its territory. He was elected to an interim term in 2002 and to a full term in 2004. That term ends in late May.

Karzai is the country's first popularly elected president and has said he intends to run for a second term. He argues that the Afghan constitution requires an election at least 30 days before the end of his term, but opposition groups are crying foul.
But Karzai may not have the authority to move up that vote, which an international commission set, Mullen said. He said the Karzai government's inability to improve security and public services have contributed to "the situation that we're in right now" -- where the Taliban and its allies, including al Qaeda, are on the offensive.
Meanwhile, the war is spilling over into Pakistan, where the Taliban have long had a foothold in the tribal areas along the mountainous border. Its supporters have been battling Pakistani troops in the region for more than two years, and the United States is believed to be responsible for periodic airstrikes that target suspected militant leaders.
Neither Gates nor Mullen would discuss those strikes, which Pakistani officials say are mostly conducted by armed surveillance drones. But Gates said Pakistan now believes the border area "is as big a risk to the stability of Pakistan as it is a problem for us in Afghanistan."
European, Pakistani and Afghan officials are taking part in the administration's strategy review, and the process could be done in "a few weeks," Gates said.

U.S. Rep. Neil Abercrombie, a senior Democrat on the House Armed Services Committee, said the administration is "buying political time" by sending additional units to Afghanistan while it completes a new plan.
President Barack Obama was highly critical of the U.S. invasion of Iraq, which he called a "strategic blunder" during the 2008 campaign. Because of that, Abercrombie said, "He's very, very wary of committing the same kind of tragic move in Afghanistan."
K

The Fact is that Pakistan is a University of Terrorists and have students from the world over ...with the same objective to establish DAR-UL-ISLAM all over the world .
Click to expand...

I don't know what the hell USA and UNO is doing.Pakistan is Nuclear state Its Time for them to inavde it and take,dismantle all their Nuclear Plants before any big disaster happen in Indian sub continent

It is all a play...and why should India wait for USA...??? If the Indians want..they should act on their own..they are busy giving blank warnings..and deadlines...they are themselves not responsibly handling such issues ..
K

rajkhalsa said:
It is all a play...and why should India wait for USA...??? If the Indians want..they should act on their own..they are busy giving blank warnings..and deadlines...they are themselves not responsibly handling such issues ..
Click to expand...

If India will Attack Pak then all Pakistani's will get united and could retaliate India with NUclear bomb but if USA will attack them then to whom they will respond?Also is Indian military or intelligence agencies are capale of attacking Pak in One stroke and ceasing their nuclear weapons I don't think so.

well i dont know what u mean by all Pakis getting united ..but yes India also has nuclear power ...i dont know about One Stroke attack like Jhatka .....but India can 'halal' them...
K

rajkhalsa said:
well i dont know what u mean by all Pakis getting united ..but yes India also has nuclear power ...i dont know about One Stroke attack like Jhatka .....but India can 'halal' them...
Click to expand...

Well There is already a civil war in pakistan with many groups trying to take control of pakistan.As far Nuclear war is concerned Pakistan is already Ruined while India Is economically progressing well.So India will loose much especially North India.The case is quite similar Like USA and USSR.If there had ben Nuclear war between USA and USSR Then USA could had lost many of its Hi fi cities forever while Russia did not had much to loose
Share:
Facebook Twitter Reddit Pinterest Tumblr WhatsApp Email Share Link