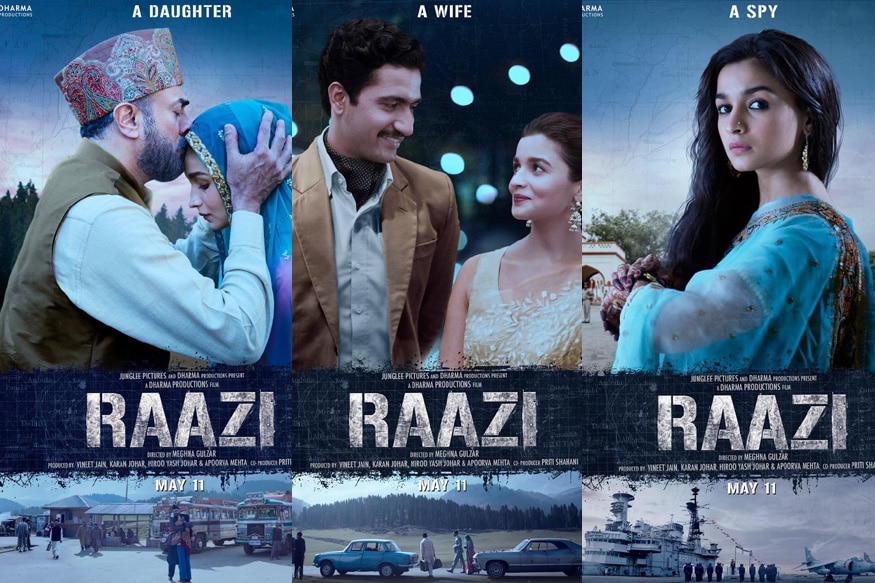 Raazi is the true story of an Indian female spy who was deliberately married to a Pakistani army man in order to gain military secrets of Pakistan and succeeded in getting vital information about the movement of a Pakistani submarine named Ghazi during the Indo pak war of 1971 . This helped the Indian armed forces counter it's attack .

The big thing about this female spy was that she was a muslim , and that too kashmiri muslim to boot . That itself makes the topic worthy of a film . Her name was Sehmat and is played by Alia Bhatt .

This is a life defining decision for Sehmat . She does not merely have to go to Pakistan but she has to live there . Above all , she has to marry a pakistani and to literally sleep with him . And to top it all , she has to give birth to his half pakistani son....

In the midst of all this , Sehmat has to spy on vital documents that contain secrets of pakistani military and pass them to Indian agents . To deal with potential danger , she is trained in physical combat and trained to kill people by Indian intelligence . She has to carry the required equipment for espionage to her marital home .

The film's big concession to filminess is the love story of Sehmat with her pakistani husband played by Vicky Kaushal . He is shown to be a real gentleman and that is too filmy . He refuses to sleep with her until she really falls in love with him and is too nice to her , even when she has been caught spying for arch enemy India . Does not sound like a real character to me . Certainly his oh so nice character has been built up to bring about a romantic angle to the film .

In fact the film shows all pakistanis in the household that Sehmat is married into to be nice people , and one sees the hand of the liberal lobby behind this . The liberals would like us to believe that across the border live nice people without a trace of hate for us in their minds . Inspite of being a pakistani military family , no one among them has really anything bad to say about India in the film . No repetitions of Bhutto's language of thousand year war against India and no mention of jehad . In fact when Sehmat's husband comes to know that she likes hindustani classical music , he brings records of that for her to listen . To a nationalist like me , the whole atmosphere built up in the house of Sehmat's in laws sounds too fake and pakistani appeasing . Pakistanis are jehad crazed barbarians with fanatical hatred for India and that should have been brought out in the film to stay close to reality .

Of course , one person who does not really gel with Sehmat is the family servant Abdul ( Rafiq Zakaria ) . He is the one who finds out about her being a spy and Sehmat has to kill him by crushing him under a truck . Then her own brother in law comes close to finding out the truth and Sehmat dispatches him by hitting him with a poisoned tip of an umbrella . She has a team of Indian spies helping her in pakistan and they help in the second killing . After that she has to live normally with her sister in law whose husband she has just killed , and all this takes a toll on her especially the brutal manner in which she has to kill Abdul .

Finally her cover is blown off and Indian agents try spirit her away . But complications occur and they have to kill innocent people and are ready to kill even her herself , so that she is not caught alive . In the midst of all this , she is confronted by her husband with the truth . But he shows grudging respect for the fact that she is doing all this for her nation India !! No trace of hatred for her inspite of her betrayal of his love !! Way too filmy man and way too liberal !! Such people exist only in films and not real life .

In the end Sehmat is disgusted by the behaviour of the Indian agents in killing innocents including trying to kill her , and does not really appreciate her Indian handler's well meant words that in this sort of confrontation it is winning the war by hook or crook that is more important and not individuals like herself or others who got killed . She gets disenchanted from the whole spy business and becomes lonely and depressed . But the pakistani secrets she gave prove vital for India's war effort , and her son joins the Indian military .

Alia Bhatt is a wonderful actress who brings about every emotion of the character of Sehmat all too well . Background music is good and photography is decent . There are many unknown people who have done countless secret missions with great personal suffering and sacrifice for the country without getting recognition for it and the film will make us remember them all .