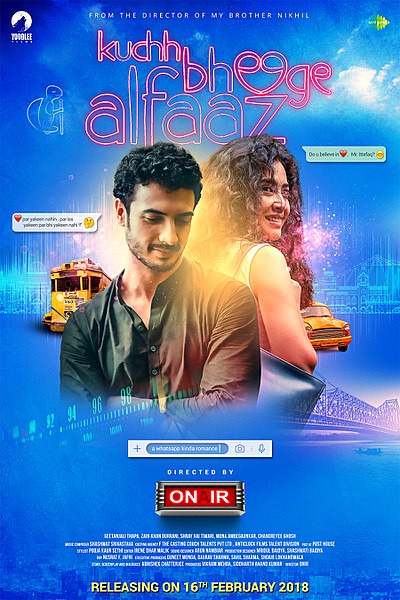 So now we are in the era of romance through the medium of whatsapp . Though only the heroine lives in the world of social media . Reason being---she is shunned in the real world because she has a disease called leucoderma/vitiligo which creates abnormal white patches on skin due to lack of melanin pigment . Of course , that does not stop her or rather it encourages her to go on blind dates with boys where she wants to see the boy's reaction to her appearance . And the reaction is photographed on mobile camera . If the reaction is funny then the photograph is used for creating branded memes ; yes Archana ( Geetanjali Thapa ) works in a firm creating them . She has a friend called Apu ( Shrey Rai Tiwari ) who has attraction for her . And she does look good wearing tiny shorts that expose her lovely legs .

As opposed to this , the hero Alfaaz ( Zain Khan Durrani ) belongs to the old world . He is a radio jockey who mouths beautiful old world poetry on radio and has a legion of fans among whom Archana is one . But he prefers to remain incognito and has not revealed his name to his fans . His creativity has been stoked by a romantic tragedy in his past , but his present life has the shadow of sadness brought about by the tragedy over it .

And don't you think the two need each other ? The melancholy hero and the girl rejected by many but in search for love....The two are brought in contact by a misplaced phone call and Archana likes Alfaaz's thoughts ( which are remarkably like the thoughts of the radio jockey she likes ) so much that she contacts him repeatedly . But it is only when she begins to use his poetry for creating memes that he gets really interested . For the world of social media is new for him . And they soon plan a date , even though they haven't seen each other yet and she does not know that he is RJ Alfaaz .

But before the two really get together , Alfaaz will have to confront his past tragedy and discard it from his life and move into the present . And so he goes to do that ; goes to the hill station of Shimla to confront and break away from his past .

The movie is produced by leftists most probably . The heroine's mother played by Mona Ambegaonkar has a past history of having studied at JNU and found her first husband there . And having eloped with her second husband ( heroine's father ) even though she was still married to her first . Is that what they teach you in JNU ? No wonder I am ideologically opposed to it .

But I was not opposed to the film , which I found to be full of old world charm even though it belongs to the era of social media . Though the touch of sadness was a bit overdone and there is a sad hang to the movie . But the romantic couplets spouted by Alfaaz do compensate for that and we find ourselves rooting for the romance to happen . And when it does , you do feel happy .

Acting by Geetanjali Thapa is good but Zain Khan Durrani is not fully convincing . Others act decently , especially Mona Ambegaonkar . Background music is decent too , and photography and colours of the movie are good .