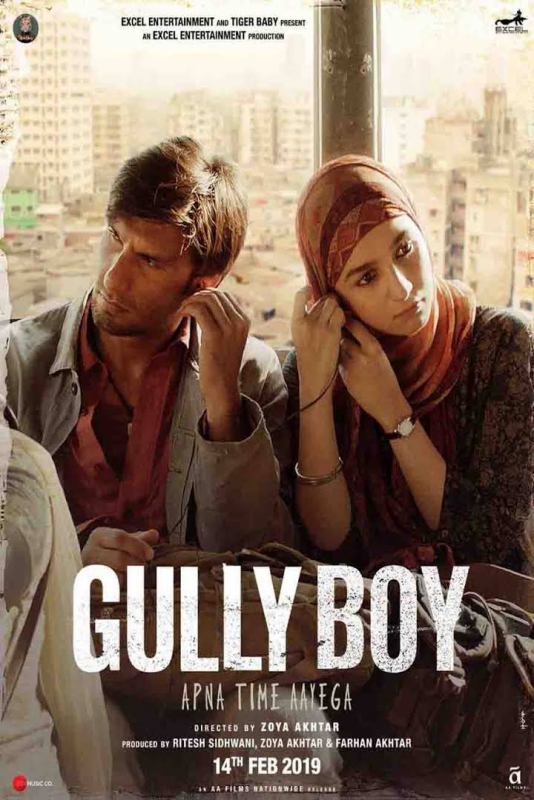 Gully boy charts the rise of a young man named Murad ( Ranveer Singh ) who lives in the slums of Dharavi in Mumbai to becoming a rap artist . He belongs to a typical muslim family from the slums ; his life is one of despair , the despair increased by the fact that his father brings another woman as wife and leaves his mother shattered .

Murad's only happy moments are the time he spends with his girlfriend Safeena ( Alia Bhatt ) and the time he listens to rap music on his mobile phone . But a rap artist called MC Sher a.k.a. Shrikant ( Siddhant Chaturvedi ) takes him under his wing and he begins to enthral audiences on youtube .

But the journey to big time success is mined with pitfalls . His father throws him and his mother out of their house , he has to take part in a criminal gang to earn money , and he is enticed into sex by another woman ( Kalki Koechlin ) which results in breakup with his girlfriend .

The background he comes from is totally opposite to the kind of life he dreams of , but luckily he has the kind of support from friends which make his arrival possible . Ranveer Singh plays his role in an understated manner , and it is left to Alia Bhatt to be feisty and aggressive . She beats up any girls daring to entice her boyfriend , as the character played by Kalki discovers to her chagrin . The smooching scenes between Alia and Ranveer and between Kalki and Ranveer are good .

The atmosphere of the slums of Dharavi has been well created , and the lingo is of the slums . The hall mark of the film are some real mean rap songs with fiery wording which is full of aggro , are downright disrespectful to the opposite person , and have been very cleverly written . For the first time I became a fan of rap music , a form of music I was not interested in earlier .

This is taking us away from our sole purpose