Hard Talk Are We Marching Backwards?

A couple of months ago The Sikh Review (Kolkata) carried an irate “Letter to the Editor.” Col (Retd) Avtar Singh, now living in Canada, reported on the latest imbroglio that was earlier commented on in this journal two years ago and highlighted the rules promulgated by the Jathedars to control the transport of Guru Granth Sahib from one place to another, whether within India or outside it. 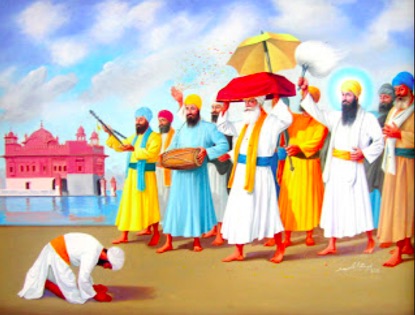 Surely, he wasn’t the only reader to be so indignant at the binding judgments and commands that flow periodically from the Jathedars and seem to be arbitrary, even capricious. Many of us Sikhs living in the Punjabi diaspora outside India find such rules unnecessarily cumbersome and regressive at times.

Was there ever a national conversation on these matters before the decisions came down? Were ordinary Sikhs worldwide ever part of a dialogue on this?

Many protests were filed with the SGPC and other relevant decision makers but as a well worn adage proclaims: It is impossible to convince a man of anything, especially if his salary depends on his not understanding it.

Avtar Singh tells us in his letter that the rules are unchanged and still seem as if designed to create obstacles for Sikhs in their relationship to the Guru Granth Sahib. The only difference over time has been that the procedures are now being even more rigidly and stringently enforced.

For example, these new rules bluntly stipulate that a copy of the Guru Granth Sahib cannot be carried in a suitcase on an airplane for transport abroad.

Why? The matter revolves around the common ideas of “respect and honor” that apply to the Guru Granth Sahib.

I wonder how does respect develop and how does it enter the dialogue in a relationship? Can it be forced? Can it be demanded? Can coercion work? Can it be legally mandated and enforced?

Does reverently wrapping the Guru properly and carrying it with you on an airplane constitute disrespect?

Respect comes from feeling, and feeling develops as a process in building a progressive relationship. Can it be mandated by law or edict? I surely don’t think so. Even in a relationship between people, respect develops over time, sometimes faster, sometimes not; and in some cases, never.

What, after all, is the purpose of the Guru Granth Sahib to a Sikh?

Yes, the Guru Granth is the repository of our spiritual heritage and the embodiment of the ten Gurus that gave it form. Yes, it is an object of veneration.

But it exists primarily to connect a Sikh to his core and to give purpose to his/her life. How is a Sikh to direct his life if he cannot easily access the Guru Granth that gives him the direction and the path.

Our goal and activity should be to ease the path of anyone who wants access to the Guru Granth Sahib, not to hinder the process. But this is easier said than done, and the existing mechanism in practice is now creating unnecessary hurdles in the process.

I submit that on an issue like this the primary question is: Does a particular action, policy or directive work to enhance or diminish the relationship of a Sikh to the Guru Granth Sahib? If the first case, then welcome the new regulation; if the second case prevails try something else.

This is not the first or the only such decision that seems shortsighted. Let me highlight my concern by simple examples from the history of some other religions because, surely, we are not alone in such monumental folly and shortsightedness. The shenanigans are similar. But we need to rethink and change, not repeat past mistakes.

In the year 325 CE, the Emperor Constantine convened the Council of Nicaea and Pope Clement XI issued a papal bull that banned the availability of the Christian Bible to ordinary Christians. The Council of Toulouse in 1229 and Tarragona in 1234 clearly reiterated and reinforced that “No one may possess the books of the Old and New Testament in the Romance Language, and if anyone possesses them he must turn them over to the local Bishop within eight days after promulgation of the decree so that that they may be burned….”

The dire result was that for almost a thousand years a variety of restrictions applied to the free availability of the Bible to ordinary Christians.

Is this what we are aiming for? You decide if such a policy bodes well or does more harm.

I remind you that in Hinduism the lower castes, as well as all women, were not allowed to read the scriptures. Before someone retorts with an angry caveat, I happily concede that in Hindu practice there exist many restrictive and strict injunctions such as this but there are just as many exceptions, and conflicting authorities can be cited to support opposing positions.

If the Guru Granth sahib is our living Guru, then to limit its availability seems to make no sense and is regressive. Think of its long-term impact: It would negatively affect the understanding and practice of Sikhi by the current generation of Sikhs as well as the generations to come. Is that what we want?

Sure, we want Guru Granth Sahib to be respected. But then I hang my argument to one line from the Guru Granth Sahib (p.594): “Dithhay mukt na hoveyee jitchar sabd na karay vichaar” clearly indicating that it is contemplation of the word that is liberating, not just the sight of the Guru.

Certainly in the 18th century when Sikhs were often at war in uncertain times, the fighting units carried a recension of the Guru Granth sahib on horseback without unduly worrying about the additional accoutrements and entourage that have now become part of the package.

Reverence, respect and honor have to be cultivated and nurtured. They cannot be mandated by law. They cannot be forced or coerced. That’s not the Sikh way, nor is it the way of any civilized society anywhere. Let’s not march backwards.

It seems to me that the leaders of our faith need to make the Word of the Guru Granth Sahib more commonly and easily accessible to all who want it. That’s the key to respect for the Guru.

Whilst I take your point, IJ Singh Ji, the rules and regulations around birs of Sri Guru Granth Sahib Ji don't really get in the way of learning from it, and doesn't come between people reading it. Honestly, how many people learn directly from the bir enthroned in darbar sahib? How many people even read it?

They don't need to; the whole thing is available online with so much supporting information it makes your eyes pop out.

It could be a problem, I suppose, in rural areas where access to technology is strictly limited. But even then, I'm not sure people in those areas would use the birs to learn from. More useful would be steeks.