A rare self-portrait by early 20th century Sikh artist Amrita Shergill has sold for USD 2.92 million in Sotheby's New York auction, setting a new record for a woman artist from the subcontinent. Amrita’s oil-on-canvas masterpiece fetched the highest total USD 2,920,000, well over the USD 1.2 - USD 1.8 million estimate for a South Asian Art sale at Sotheby's since 2007, auctioneers said in a statement today. 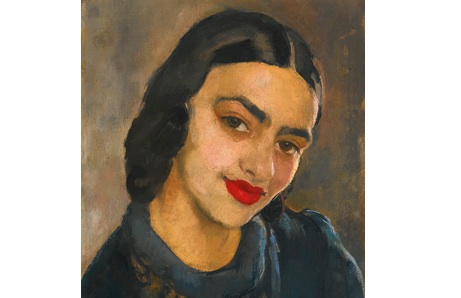 Born in Budapest to a Sikh, Sardar Umrao Singh Shergill Majithia and a Hungarian mother, Amrita painted the portrait in 1932 when she was 19. It is one of the very few of her canvases that are in private circulation outside India, where the artist is among artists declared as national treasures by the government and whose works cannot be taken out of the country.

Amrita Shergill painted her self-portrait in 1933 at the young age of 19. In the painting, she's often reputedly referred to as "a demure coquette with a spark in her eyes and bright red lips that symbolize her burgeoning womanhood". Those well-acquainted with her work understand the rarity of this occasion (this is the third appearance of Amrita's work in the international market) and will be able to share this artistic moment with others witnessing her work for the first time.

"The appearance at auction of a work by Amrita Shergill is an historic event and so it is fitting that it led our best sale result in a decade," she said.

Priyanka Mathew, Head of Sales of Modern and Contemporary South Asian Art at Sotheby's New York added, "It was thrilling to be the auctioneer for the historic Amrita Shergill painting which fetched close to USD 3 million.

"The price is a record for both the artist and also for any Indian female painter. The spirited bidding on the 'Self-Portrait' came from three continents and lasted over ten minutes to result in a landmark price," she said.

Sotheby's two sales of Indian Art on March 17-18, raked in a total of USD 16,632,875 comfortably exceeding its highest estimate.

Provenance: Given by the artist to her cousin-niece and husband during Sher-Gil’s visit to Europe circa 1933. These relatives were part of Ervin Baktay’s branch of the family. The painting was in the possession of the family and was acquired from them by the current owner.

Catalogue Note
Amrita Sher-Gil is considered to be one of India’s most important early modernist painters. In December of 1976, India declared her a national treasure with regard to her ‘artistic and aesthetic value’ and prohibited the exportation of her paintings outside the country. Not only did she play a crucial role in the articulation of twentieth century Indian art and was a seminal influence on generations of Indian artists, she also pioneered a new form of Indian modernism.
In life and art Sher-Gil was a woman both within and ahead of her time breaking boundaries that make her one of India's most compelling figures in the 20th century.

Like her Mexican peer Frida Kahlo (1907-1954), who was also half-Hungarian, Sher-Gil was a rebellious and adventurous spirit who represented a rare zeitgeist of avant-garde women from traditional cultures who broke barriers in art and life. They worked in similar moments at opposite parts of the world.

Born in Budapest, her mother was a Hungarian Jewish opera singer and her father was an Indian Sikh aristocrat and scholar. She lived in Hungary, India and Paris during her lifetime, and her art embodies a bohemian combination of east and west. Mixing elements from both her Indian and Hungarian cultures, with her rigorous training in Paris at the Grande Chaumiere and later the École des Beaux-Arts, Sher-Gil developed a novel style of painting that transcended cultural barriers. ‘Artists like Amrita Sher-Gil are not the mirrors of their time but telescopes through which the future may be discerned. They make the revolutions, they anticipate the new order, for the destructive portion of its work is merely the preparation for new creation, just as the storms of autumn strip the trees bare so that the new life may unfold itself in the spring. Amrita, who was herself a blending of the Orient and the Occident, was looking for more than new forms; nor was she seeking just harmony. She was a herald of the spiritual equilibrium between Europe and Asia, a new synthesis, a step towards the age of world-art.’ (B. Dhingra, Amrita Sher-Gil, Lalit Kala Akademi, New Delhi, 1965, p. i)

Sher-Gil and her family moved to Paris in 1929 when she was 16, upon the urging of her maternal uncle, Ervin Baktay. Baktay felt that she would have better opportunities to hone and develop her talent there. Throughout her tragically short life, Sher-Gil went through several periods of exploration but particularly in the early 1930s in Paris, she was experimenting with various styles and it was then that she started to paint with oils for the first time. Most of the paintings she made between 1930 and 1933 were portraits and self-portraits.

Yashodhara Dalmia posits that Sher-Gil would have benefited greatly from the liberal nature of life in Paris. ‘Certain aspects of Amrita’s character, which were latent till now, started to become conspicuous in the heady atmosphere of the Latin Quarter. Her confidence flourished and she became a vivacious and stimulating person, in full possession of herself, spending her nights in animated conversation in dimly lit cafes. Her self-portrait in 1930, when she was seventeen, shows a brightly made-up woman with glowing cheeks and full red lips, wearing a low-cut dress against a flaming-red background.’ (Y. Dalmia, Amrita Sher-Gil, A Life, New Delhi, 2006, p.28) The painting that Dalmia is referring to is one of the earliest known self-portraits by the artist.

Whilst residing in Paris for those five years, Sher-Gil and her sister Indira spent their summers in Hungary, mostly in the small town of Zebegeny, where Baktay would organise summer camps. Painted in 1933, the same year that 19 year old Sher-Gil won the Gold Medal from the Grand Salon, this self-portrait was made during one of Sher-Gil’s summers in Hungary and is a wonderful example of her blossoming artistic and personal maturity. Miklos Losonczi has commented on this current painting, ‘Pure and true sensualism can be read on her falling black hair and the playful smile of her round eyes. Her look is full of expectant desire and the ash-coloured background blunts the expressive gestures of her fiery-red lips, the message of a girl becoming a woman.’ (G. Wojtilla, Amrita Sher-Gil and Hungary, New Delhi, 1981, p.22) The light hitting the side of her face, surrounded by the darker colours of her clothing, hair and the background, lends an almost chiaroscuro effect to the work. Her lips become the focal point of the painting, drawing the viewer’s attention towards them. A slight hint of an enigmatc smile and a mischievious twinkle in her eye, make this charming self-portrait, one of the very few such works in existence outside of India, a leading example of Sher-Gil’s oeuvre.

Karl Khandalavala has commented, ‘Amrita Sher-Gil’s figures are always static, but her colour organisations are vibrant, glowing and intense. This contradistinction, which is apparent throughout her work, is an expression of the character of her emotions, both in life and art, which were a strange combination of the static and the dynamic’ (K. Khandalavala cited in D. Ananth, ‘An Unfinished Project’, Amrita Sher-Gil, Schirmer/Mosel, 2007, p. 21) This quote is both poignant and relevant to the current painting. Although she is tilting her head slightly, her pose is indeed very static, yet her brilliant use of colour lends a certain energy and vitality to the work.

In Paris, Sher-Gil was also exposed to the works of Paul Cézanne and Paul Gaugin. She was particularly enamoured with their uncanny ability to blend the old with the new. Much like Gaugin’s depictions of Tahitian women, Sher-Gil’s self-portrait is stylistically simple yet sexually complex. One year later, she even painted a portrait of herself as a Tahitian. In much the same way that Gaugin left France and was inspired by Tahiti, subsequently changing his style and subject matter, Sher-Gil also left Paris for India in 1934 and was influenced by her Indian culture, choosing to then depict rural subjects and their way of life rather than the portraits that she previously favoured. Instead of revelling in the popularity of the past, she preferred to look toward the future.

There are a very limited number of works made by Sher-Gil before her sudden and untimely demise at the age of 28. In total, 172 paintings have been documented and of those, 95 are in the permanent collection of museums and institutions within India, notably the National Gallery of Modern Art in New Delhi, and will never be allowed to leave the country. (V. Sundaram, Amrita Sher-Gil, A Self Portrait in Letters and Writings, New Delhi, jacket) This self-portrait is one of the rare opportunities for collectors to acquire a work painted by Sher-Gil that is outside of India and in free circulation. This is also the first time one of her self-portraits has ever been offered for auction. This subject matter coupled with the rarity of finding one of her paintings in free circulation, adds to the immense significance and rarity of this work.

Focus is on Shabad YOG (Connect)


The best (YOG)connect is positivity of MIND in all situation, which comes through spirtual education, as it is not the intellact, power...