Opinion - Ami Bera: Only The 3rd Indian-American To The House Of Representatives, Member Of The American Sikh | SIKH PHILOSOPHY NETWORK
Menu
Log in
Register

Opinion Ami Bera: Only The 3rd Indian-American To The House Of Representatives, Member Of The American Sikh

Only the third Indian-American to make it to the House of Representatives, Bera is now part of an American Sikh caucus.

Championing civil rights in US

There was considerable hue and cry when Ami Bera, the only Indian-American Congressman, joined the newly formed American Sikh Congressional Caucus in May. After all, he had joined the caucus, totally ignoring the concerns of several Indian-American groups and the Indian embassy that it was backed by groups and individuals who have in the past openly supported the “Khalistan” movement.

The 48-year-old Bera, however, remained unmoved. He defended his decision, saying he was joining the caucus to work on “civil rights” issues. His contention was that violence and discrimination against the American-Sikh community was a real and important civil rights issue in the US. “That’s why I co-sponsored strong anti-hate crimes legislation earlier this year, and that’s why I joined the American Sikh Congressional Caucus, to work on civil rights issues here in America,” Bera argued.

Civil rights and community service have clearly become the main objectives of Bera ever since he was elected from California in November last year to become only the third Indian-American to have ever entered the House of Representatives after Dalip Singh Saund in the 1950s and Bobby Jindal in 2005.

Born in Los Angeles on March 2, 1965, to the son of immigrants from Rajkot in Gujarat, Bera (Amerish Babulal) grew up in a vibrant household, benefiting from traditional values of discipline and hard work, solid educational foundations and an underlying belief in the American Dream.

He has a bachelor’s degree in biological sciences from the University of California at Irvine, earning his MD there in 1991. He served the Sacramento region as a physician and educator for almost two decades before deciding to join electoral politics. He confessed he ran for Congress because he wanted to make sure others have the same chance at the dream that he had for generations to come. His campaign for a Congressional seat from California received a surprise boost when his candidature was endorsed by the charismatic former President Bill Clinton.

As a Democrat, Bera defeated three-term Republican incumbent Dan Lungren in one of the most competitive races in the US to represent California’s seventh Congressional district in suburban Sacramento. And the list of his admirers has grown during his first few months in office. He has also been appointed to two key congressional committees that would help him play a key role in shaping America’s foreign and science policies. Bera considers it a special privilege to be a part of the most diverse US Congress ever elected. “I think it’s wonderful that the House of Representatives is going to look a little more like the rest of the US, and I hope our campaign can serve as an inspiration for many more Indian-Americans and people of all backgrounds to get involved at all levels of government,” he remarks.

As a Congressman, he has been working tirelessly to bring Republicans and Democrats together to rebuild an economy that works for the middle class. His wife Janine is also a medical doctor and they have a 15-year-old daughter Sydra.

Ask him about the Indo-US relations and Bera gets excited. “India is an important strategic partner to the US and the two countries have a history of collaboration on many regional and global issues. India should continue to be an important strategic partner, and a place where we can grow the market for American goods and services,” he said at an interactive session organised by the Aspen Institute in New Delhi during his visit to India this week.

Bera believes India has a key role to play in the post-drawdown phase in Afghanistan and lauds a wide range of initiatives undertaken by New Delhi in areas like education, public health and infrastructure in the embattled country. Being a Gujarati by birth, Bera is appreciative of the developmental work done by Gujarat Chief Minister Narendra Modi in the state in the past over a decade. At the same time, he wants to play it safe when asked why Modi, who has been voted to power again and again by the people of Gujarat, was being denied visa by the world’s oldest democracy. “If he desires, Modi can apply for visa, but it’s for the State Department to take a decision on his application,” Bera stated, not wanting to take a position on the issue.

Bera’s long-cherished dream is to see an Indian occupying the post of US President one day. With Indian-Americans becoming one of the most powerful ethnic groups in the US, the dream is not all that unrealistic.

If I can see Indian-American US President, that's my legacy: 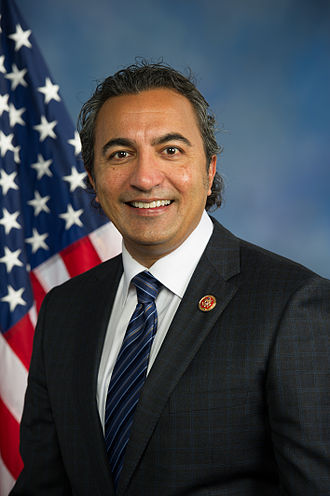 NEW DELHI: Indian-American US Congressman Ami Bera has said that seeing a member of the community as the President of the United States in his life time will be the true legacy he can leave behind.

The 48-year-old California-born Democratic lawmaker, the only Indian-American currently serving in Congress who made his first visit to India after being elected to the office, feels more ethnic Indian people will rise and assume higher offices in the US in the coming years.

Bera's father hailed from Gujarat and migrated to the US in 1950. He is the third Indian-American — after Dalip Singh Saundh in 1950 and Bobby Jindal in 2005 — to have been elected to the House of Representatives, the lower house in the US legislature.

The lawmaker who counts Mahatama Gandhi, Martin Luther King and Nelson Mandela as inspirations said that more Indian-American joining politics and rising would only be a "natural progression".

"I see so many Indian-Americans in the hallway in the Congress and people rising and assuming higher offices would only be a natural progression for the community that has risen on the core values imbibed across generations," Bera said.

Indian Americans numbering 3.2 million is the third largest Asian American community in US after Chinese Americans (3.8 million) and Filipinos (3. 4 million).

"Qualities of family, qualities of a strong sense of community, qualities of sacrificing so that your children can have a better future...and those are not just Indian or Indian-American qualities but those are qualities that every parent or families stood out for, is what made us.

"I think it takes tremendous courage to leave a small village in Gujarat and go to a country where you don't have anything and where you don't know anyone... that is a story that is told over and over in our community... and, we should not forget those stories," Bera added.

The lawmaker called the "reverse migration" happening from US to India currently as one of the exciting phases for the Indian-Americans.

"I think the first generation who had left..their children who studied in America, are coming back..because many things like doing a start-up is easier here..so they are making their innovation here and it is important that it is documented," he said.

He emphasised that next generation of Indian-Americans will redefine the Indo-American relationships.

"Indo-American relationships will be one of the defining partnerships of the 21st century and the next generation of the Indian-Americans will further redefine it. And those Indian-Americans, who are born and raised in US, will play a greater role in that," he said.

The US lawmaker, who called the Indian-American community as the "marriage of best of both the worlds", said this was the time for them to give back to America.

"I am only here because of the opportunities other have made for me, and those are also American qualities...I think if we embrace who we are and embrace those qualities we can be successful," he said.

During his week-long trip, Bera visited Mumbai, New Delhi and Bangalore, where he met business leaders from both American and Indian companies to strengthen the trade relationship between the two countries.