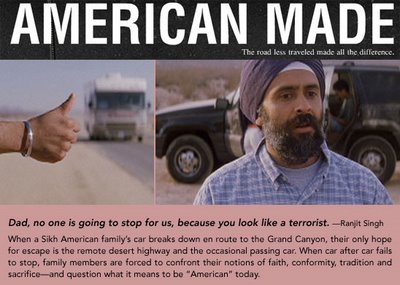 Acclaimed short film about a Sikh American family after 9/11 premieres on PBS' Independent Lens starting May 9, 2006.

American Made ( http://americanmadethemovie.com ) is a story about a Sikh American family in the aftermath of 9/11. When the Singh family's car breaks down in the desert, Ranjit tells his father that no one will stop to help because "he looks like a terrorist." What follows is the heart-rending struggle between a father and son and a larger exploration of faith, tradition, acceptance, and what it means to be 'American' today. Told with humanity and humor, American Made has won seventeen awards from film festivals around the world. It will likely be the first fictional film about Sikh Americans post-9/11 on national television. Director Sharat Raju's next project is a full-length documentary film Divided We Fall: Americans in the Aftermath to be released in Fall 2006.

TUNE IN… Find Your Local Station!
American Made has 529 air dates on 200+ station affiliates. Major cities listed below.

It would be nice if this film can be aired in Canada as well.