A New Generation Wants To Reconnect With Punjabi

Like many South Asian parents living in the US, Gurmeet Kaur was concerned about the disappearance of her mother language Punjabi. She was worried about how she could connect her son with a language that he did not use at school. Foremost was the challenge of finding good children’s literature in Punjabi.

Many parents in Pakistan can relate with this as well. Unlike other parents, Kaur did what was most unexpected of a young mother with an engineering degree and career. She started collecting Punjabi folktales and decided to revive bataaN (talks) — a genre of Punjabi tale-telling with rhyme and repetition that, traditionally, grandmothers share with young children at night. They also involve sing-along songs in the end.

Kaur’s collection of folktales, extensive research and a team of artistes and editors culminated into a non-profit project that has published quality, cardboard and bilingual books (English and Punjabi in Gurmukhi script, initially) for children. It can rival any international children’s literature. 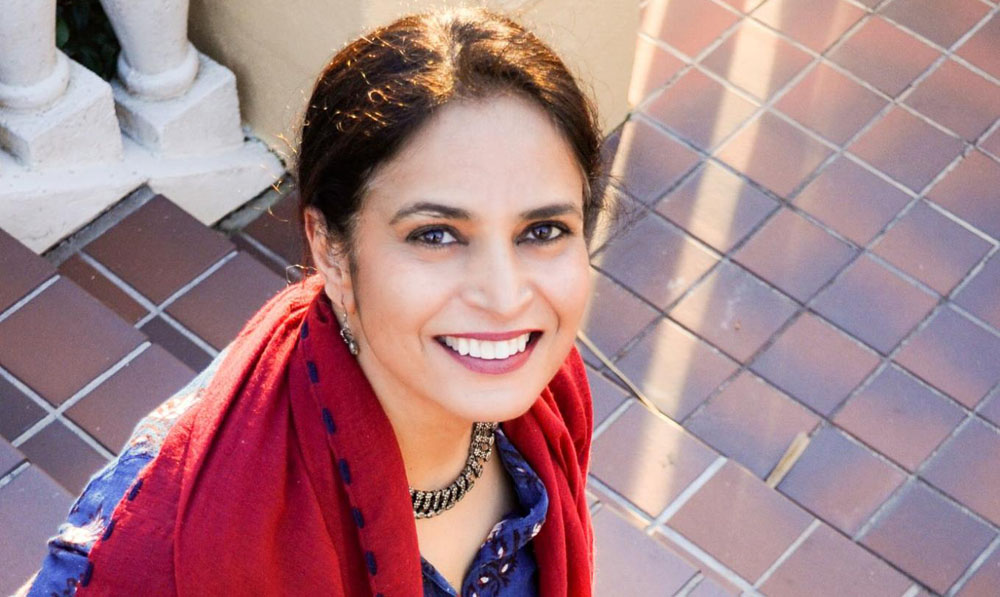 She operates through her website and a Facebook page, entitled, ‘Fascinating Folktales of Punjab’. She also frequently visits diaspora communities for reading to children and has mastered the art of rhyme and repetition. One of her methods has been to involve Gurdwaras for story-telling sessions.

In just five years, she has published 10 bilingual books. Her latest one also uses the Shahmukhi script of Punjabi. Twenty-seven thousand copies of these books have been published in this short time period and 15,000 copies have already reached children in the three Punjabs — Indian, Pakistani and the diaspora — which she collectively calls ‘the Undivided Punjab.’

It is to Kaur’s credit that she has created a thriving start-up of publishing Punjabi children’s literature, something that children instantly love.

She was recently in Pakistan in connection with promoting her Fascinating Folktales of Punjab. She had a heavy schedule of events at LUMS, reading sessions at the Lahore Grammar School and Punjab Institute of Language, Art and Culture (PILAAC) in Lahore and a panel discussion on children’s literature at the 3rd Lyallpur Literary Festival, Faisalabad apart from other engagements in the native country of her family who migrated from the Pakistani part of Punjab.

During all these appearances, she mesmerised her audiences which comprised young school children, students of Laliani (Mustafaabad-Kasur) college and Faisalabad University and even adults during her reading sessions. Baffled and wide-eyed to start with, they would listen to her readings and ultimately join her voice and beat in chorus: “Chiri vachari ki karay [What shall the poor sparrow do]?” She promptly clicks and invokes words lying dormant somewhere in the back of our minds.

The News on Sunday met with her at the 3rd Lyallpur Literary Festival in Faisalabad and interviewed her. Following are excerpts:

The News on Sunday: (TNS): What were your first impressions of Pakistan?

Gurmeet Kaur (GK): While coming to Lahore, I thought I was going to the heart of Punjab. But from the driver who dropped us at LUMS to LGS where I had reading sessions with students, I could not hear any Punjabi. I asked school students in Lahore: “Whose language is Punjabi?” They said it’s the language of our servants and maids.

It has saddened me to think where Punjabi as a language will go; we are losing a civilisation.

The situation is not encouraging in the Indian Punjab as well. There, the language has been fused with Hindi. In rural areas, children speak Punjabi but they are aloof from literature. In urban areas they can speak just a bit and are onto English and Hindi more.

TNS: Despite having a degree in Engineering, how did the idea of publishing children’s literature come about?

GK: I got my engineering degree in 1994. My first child was born in October 1993. It’s like second birth for a mother who has to think how to raise her child and what is his identity? Then I realised my Punjabiyat and Sikhi (Sikhhood). For us Sikhs, both identities correspond and are complementary to each other. In my mind, you can’t be one without the other because of Baba Nanak and Guru Granth Sahib being Punjabi; learning Punjabi was part of my Sikhhood till then.

This is despite the fact that I was two generations away from Punjabi. I didn’t grow up reading, writing, or listening to Punjabi.

TNS: It becomes nostalgic and devotional for Punjabis who are away from the mainland of Punjab?

GK: Yes, I was born in Kanpur and raised in Indore in Utter Pardesh, away from Punjab. Both my paternal and maternal sides were originally displaced families from (now) the Pakistani side of Punjab. My mother was from Kala Jhelum and my father’s side came from Bannu so I had inherited the Potohari and Bannuwali dialects of Punjabi. Like other migrant families, they were utterly ruined. They would not take us to Gurdwaras or speak Punjabi with us.

Their struggle was mostly financial. They had been stripped off of everything in 1947. This was not because of distance, but because of the desire to assimilate themselves in new places. They settled as Sikh families do in other parts of India. The mind-set of such Sikhs was to re-establish themselves.

Then 1984 [Sikh genocide] happened. I was 15-years-old. A realisation started to take root in me that India does not own us and basically we were not Indians anymore. When my son was born, I started to think about what to do with the next generation and what he would become. I began introspection. That’s why I aligned myself with the Punjabi language. I started learning Punjabi and also taught my son. And I collected Punjabi literature.

I struggled to connect my children with Punjabi on my own. I didn’t have an environment where it came naturally; neither from my parents nor from my in-laws. It was solely my own journey.

Seven years ago my daughter was born. Then I realised that I needed to connect her with Punjabi language and its literature. My son is well-versed in Punjabi. He has been to (Indian) Punjab and has also worked with youth there. I wanted my daughter to connect even further with Punjabi literature and tradition. She is 7-years-old and can already recite classical Punjabi poetry and the verses of Baba Bulleh Shah. She has performed poems of Prof. Mohan Singh as well.

My journey is along my kids; it grew as they grew. I associated myself to children’s literature because I wanted to my children to have a Punjabi legacy. But I don’t just want it for my own children: I teach all Punjabis about the Punjabi legacy.

TNS: What were you professionally doing before coming to publishing of children’s literature?

GK: I quit my job last year. I was at GM/director level at a telecommunication company. After my daughter was born, I dedicated myself to literature. I worked at the speed of a bullet train and completed 10 books for children in five years — a thorough one-woman show. You can imagine what hard work I have put in — to collect folktales, retell them, have them illustrated. I could not find a publisher because no one was ready to financially invest in it; so I did everything myself.

TNS: It’s a massive task the way you have teamed up people and developed a system for publishing children’s literature out of nothing.

GK: I would call it a one-woman start-up. But now, volunteers have begun teaming up with me. We don’t have a traditional marketing mechanism. We operate through our website and Facebook. People who buy our books also help us.

I also do story-telling in communities. Children are attracted to these stories. If you see me with children, I am a different person. Then they realise how sweet the Punjabi language is. They can’t resist it. I get letters from parents that their kids have hundreds of English books but they bring your books and ask them to be read. Children are fascinated when these folktales are read in repetition and rhyme.

I use authentic language and preserve it as have been told in the tradition of grandmothers telling these bataaN (talks). I have also moulded some and retold them.

I have also tried to preserve the best of Punjabi in these tales, connecting with the soul of the people. It fills our hearts.

Transforming this text into audio is important. There is demand for it in the US. Mostly second generation Punjabis reside there and their children don’t know how to read Punjabi. These families are still struggling to establish themselves financially. But a new generation is emerging that wants their kids to reconnect with Punjabi. Because of an inauthentic vocabulary, they cannot pronounce words properly so many parents have requested me to do audio versions of our books.

Our publishing system is not that organised and is volunteer-based. It is a non-profit project. I put my Dasvundh, 10 per cent of income for charity as the Sikh tradition goes, as the seed money for publishing folktales for kids. That was my Sucha Sauda (true bargain) as Baba Nanak had done. My total project was USD20,000.

I published 9,000 copies in the first round in 2013. On this Vasasakhi (April 14, 2018), we will be celebrating the 5th anniversary of our publishing. I don’t charge for my time. All the money gained from sale of the books goes to publishing more books.

TNS: How do you go about selecting the folk tales?

GK: I read out hundreds of stories to my daughter. Whatever that clicks with her is chosen. It’s then illustrated, story boarded. A lot of research is involved. There have been multiple factors considered: vocabulary, connection with Punjab, new lessons. I have a wide range of selection of stories with me and keep searching for folktales.

Thank you Tejwant Singh ji, great post and wonderful effort by Gurmeet Kaur ji. I have heard it from someone that Punjabi is being reintroduced aggressively in Pakistan-Punjab schools! I don't know how to find it out but that will be wonderful. I know not all people like Gurdas Mann or all his songs but the following is one wonderful poetry about the language Punjabi,

Tejwant Singh Ji, this is a beautiful way of promoting the language of love - much needed.

Language is repository of ideas n culture that embodies a unique way of looking at the world. Every effort should me made therefore, to preserve, protect and advance its indefinite existence.

I'm a great believer in evolution theory [Darwinian], that it will only advance what it considers to be beneficial for the wider human race. English is the third most popular language in the world and is now spoken in over 100 different countries. It dominates international relations: law, business, science n technology. It makes sense to have Englush rule, but not on the demise of other languages.

The problem we have with Punjabi is attitude. The dominant and minority language speakers consider small languages, such as Punjabi, backward, obsolete, difficient in some way. Revival initiatives are needed, and I'm pleased to confirm that I'm part of a project that is currently up n running to that very accomplishment. We're working in conjunction with delegates from Pakistan Punjab n India Punjab to prioritise Punjabi over Hindi n Urdu in all schools. This line of argument that seems most plausible to someone depends more on their political and religious affiliations than on knowledge. Dominant group psyche [Hindi n Urdu] is the want to obliterate the name Punjab and the language Punjabi from memory n map.

This shabad uses the word ਜੀਉ frequently, it is written as if Guru Ram Das is talking to a friend...