Who picks the colour, the oddest comments he gets and the technique of tying his topknot 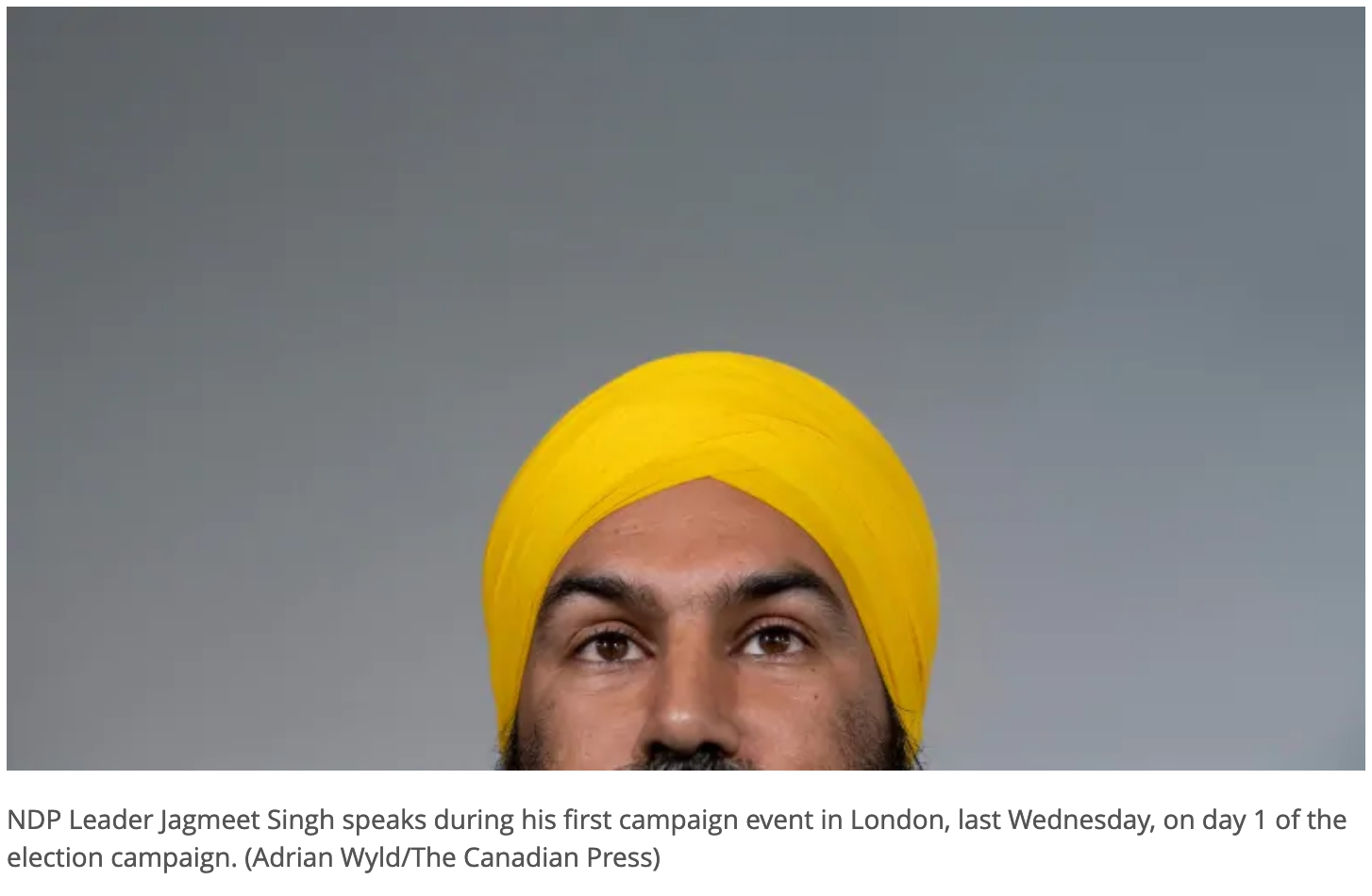 NDP leader Jagmeet Singh is travelling for the next couple of days through Quebec — a province that recently implemented a law that forbids some civil servants in positions of authority from wearing religious symbols.

One of the articles of faith for observant Sikhs is to leave the hair and beard uncut. Singh wears a tightly wrapped turban on his head and a sheathed kirpan (a small ceremonial knife) on a strap, each a symbol of his Sikh faith.

They raise some eyebrows in Quebec, but Singh says he's not worried. He feels he will get a warm welcome throughout the province. But Bill 21 bans people working in the public sector from wearing visible symbols of their religion, meaning Singh couldn't be a police officer or teacher and continue to wear his turban.

The NDP leader says he's glad to use his identity as a conversation starter.

"I always loved when people came up to me and asked me questions," he said. "Ask away. It's better that people ask."

Singh sat down on the campaign tour bus with CBC News to dispel some myths about his colourful headdress, offering explanations on five things people don't know about the turban.

1. The turban is supposed to be a beacon to those in need

He said the turban helped to single someone out as a Sikh.

"Sikhs were considered the champions of fairness, uplifting people, protecting and defending human rights. Defending equality. So when someone sees a Sikh, the turban identifies a person who's going to stand up for rights, even if you disagree with them.

"The turban is supposed to be a beacon. That someone who is going to help you out." 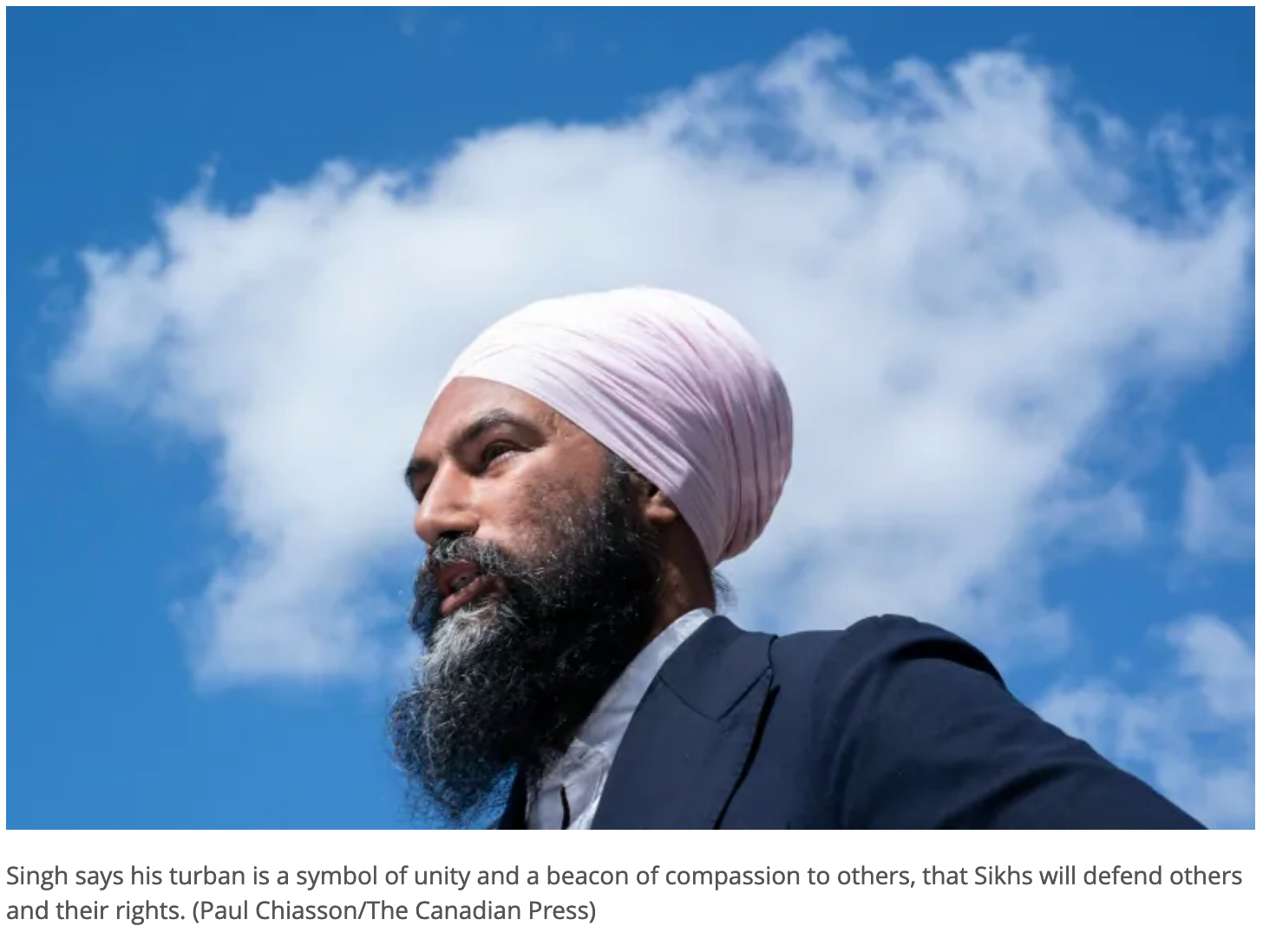 2. The purpose of the turban is to symbolize unity

"The biggest purpose for why Sikhs have this identity [wearing a turban] is that it represents what Sikhs believe in. Justice for all, equality, a really radical notion of compassion. This idea that you and I are one. So if you're going through pain or something's hurting you, I should feel like it's hurting me as well."

3. You can show your hair as a Sikh

"In the Sikh tradition there is no prohibition of showing your hair. It's not that hair cannot be seen. It's an identity, as opposed to having to cover your hair."

His flowing locks are so long he can wrap them up without a hair band or elastic. When he swims, he twists them into a bun. When he works out, he ties them back and adds a bandanna.

4. Techniques for tying the topknot are an ancient tradition

"There is an ancient tradition of how to tie the topknot that gets passed down from parent to child. In my case, my mom taught me it. So this is a tradition, and not all Sikhs know it actually.

"This is passed down tradition of knowledge from my mom to me and now I'm going to pass it on to my sons and my daughters hopefully if I have kids."

5. Singh's wife picks his turban colour so they match

"The colours initially were chosen by me. Pretty much by random. I would just choose a colour that I liked. Maybe it would go with my outfit a bit. Now the colours are chosen by my wife because she loves me to match her outfits. That's her thing. So she now chooses."


Bonus Round: What's the oddest thing someone has said about your turban?

"There are so many interesting things people have said," Singh said.

Some people thought his topknot was a potato or that he was wearing a bandage for a head injury, he said, while others thought it was like a hat that could be taken on and off.